Mary Ann E., with unerring insight, wanted, before it got too late, to gallop around Hamilton Mesa in the Pecos Wilderness (like we did last year).

We went last Friday, and not a moment too soon, because the temperatures crashed and we got a lot of snow early this week! 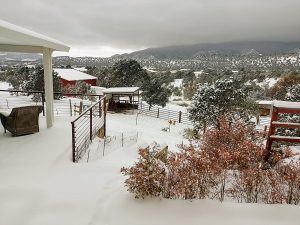 The wild rose bushes were shutting down (the leaves are red, indicating degradation of the normal photosynthetic pigments), but I don’t think they were quite prepared!

LT loves to gallop, but she is busy freezing her heinie off in CO, so I took Lucy. Lucy was maybe not as keen on full out galloping and maybe really not as keen on leading while galloping, but I will give her B+/ A- for the day!

We left from Walmart around 7am.  I left my truck trailer there and loaded Lucy in with Rosebud. My rig did not go unnoticed–two friends texted me pics when they went to Walmart!! Don’t mess with my stuff–I got people!

It was a lovely clear morning until we neared the town of Pecos where it looked like this! 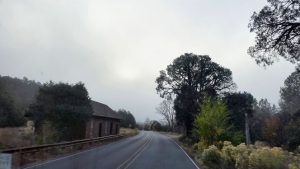 Fortunately, it was just some odd ball fog and we drove on up, up and out of it!

We rode up out of Jack’s Creek to Iron Gate.  Right before the bridge there is a spot that could use some widening, but it was the immediate approach to the bridge that Lucy found objectionable.   It did kind of look like one could fall off the trail under the bridge. (That could use some Back country horsemen upgrading, again, also.)

I went ahead and led her over, which did take a moment of persuasion on my part.  And no thanks to getting a drink the other side, she said.

I decided not to push that, either.  We were going about 19 miles and I figured she would get thirsty when she got thirsty, and there is water in various spots on this route.

The rest of Iron Gate Trail was in good shape, save for a few down trees.  Dang these trees.  They just keep on falling! We went over or around.

Out of Iron Gate Campground, we headed to Hamilton Mesa.  It was very dry but the views are just expansive, kind of making me want to break out in to some song from the Sound of Music! 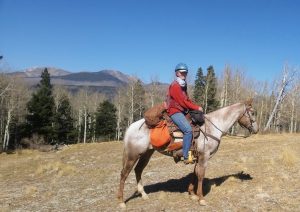 “The hills are alive…”

It is a great place to gallop!! So gallop we did!  Rosebud did most of the leading because Lucy was just a little hesitant.  “do we have to run?!  i really only like to run if i am chasing a cow.”  (And later she spooked at a range cow, so I would add that apparently she really only wants to run if she is chasing a cow IN AN ARENA.)

Still, as you can see from the photo, we did have a bit of gear attached and neither Lucy nor Rosebud objected to galloping with gear!

I confess, I loved the feeling of freedom from the all the cares of the world while we were charging across the mesa!  It was a true “in the moment” experience!

The trail drops down to the Pecos River, below Beatty’s cabin.  Guess what?  Lucy was thirsty!

We ate lunch at the cabin, turned off the water (from a  spring box) for the winter, and enjoyed the view, which is across the canyon, where we had just come from! 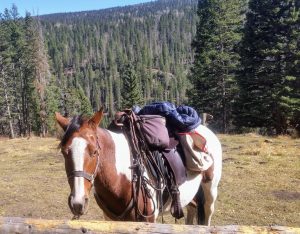 Mary Ann’s horse Rosebud says, “don’t bother me! i am resting right now! i had to lead most of the way over the mesa!”

I had not been to Beatty’s Cabin all year.  It really is a nice ride from there back to the Jack’s Creek Trailhead. 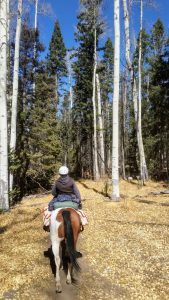 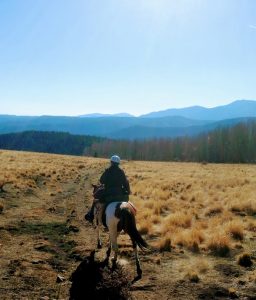 I do love the meadows as the trail comes down to the junction of 25 and Dockweiler.

(We galloped some more!!)

H is going to the Appaloosa World show!!

In fact he is probably there already!  I will not get there until Nov. 4th.  Cody Crow will ride him in all his events except ranch rail, where Cody had a conflict.  I will ride him in that.

H did not go to any shows all year, and is still a bit green, so we are gambling some.  On the other hand, Cody says it would be hard to find another horse as talented as H. Which, of course, is what I also think. This makes me miss my old friend and cow coach, Ed Krauss.  He would have gotten a big kick out of H and we could have kept H home.

But, we did buy H as a prospect, and we have a couple of interested parties lined up to see him at the World!

All his classes are in John Justin Arena. Click the link to get the webcam site, then Choose Watch Justin Arena!