It wouldn’t be fall without Elk Season in the Cruces Basin with the ever amazing Kingsbury hospitality.

This year, they hosted 11 humans and 13 equines at the unparalleled Hotel Kingsbury. 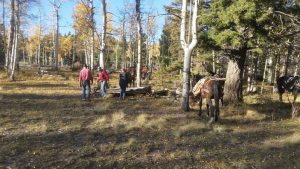 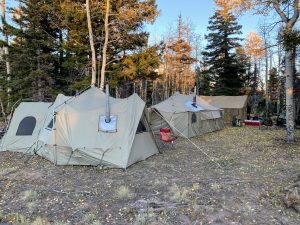 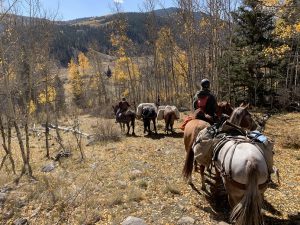 Amber and two mules, and me on Penny, Lucy packing. We are doing our share of moving material to and from camp!

Last year, Jim had a late season rifle tag and it was just Jim, Richard and me.  It was so cold while hunting that my water froze in my camel back hose!  This time, the weather was outstanding on every day but  Windy Sunday! And even Windy Sunday was not very cold. I mean, I was never tempted to put on my heavy gloves!

Nevertheless, it was nice to have a wood stove and a wall tent to call home for a few nights!

Of course, as the wind was busting through camp in the wee hours, it blew our stove pipe apart.  We had to evacuate the smoke filled tent, and reaffix the pipe parts.

The tent cleared out well and quickly because when we opened both ends, we had our own private wind tunnel.

Another casualty of the wind on Sunday afternoon was a big spruce rather near the highlined herd. 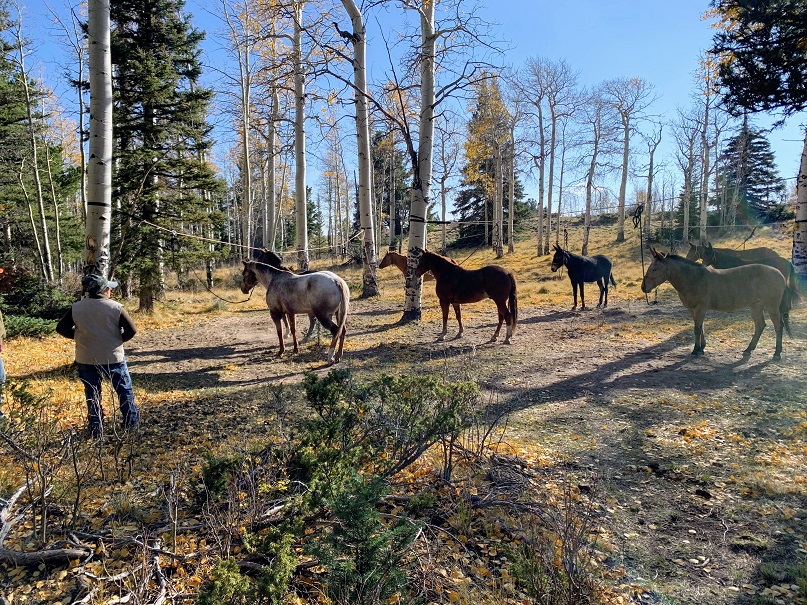 A giant falling tree catches the notice of even the most experienced highliners! “holy timber, batman! did you see that?! we are not sure we are actually safe in this spot!”

I am sure the question of everyone that knows Jim’s woeful record of five draws in six years and only one elk to show for it is, “Did Jim get an elk?”

We have decided that Jim might be in the pity pool at the state office where they hand out permits. They have a wager going to see how long it takes him before he brings home the goods! The pool did not pay out this year.

He did have a young 4×4 within 25 yards on opening morning, but while that bull and I had a fine few minutes staring at each other, Jim was completely screened from the scene by a thick tangle of dead spruce.

That bull came down out the aspen to the trail we were on, stopped and then kept coming to try to figure out what we were!

I was sorry I had to come out on Sunday, because the elk activity really stepped up after Windy Sunday.  Jim nearly got run over by two spooked cows–so close that he actually got behind a tree to get out of the way!

Two of our party got animals on Monday: Amber, a cow and Sean a bull!

I think the horses got a bit tired of the feedbags.  Lucy, the glutton, would gobble down her pellets, lick the bag clean, and then complain every time I came to check on her that she did not have NEARLY enough to eat. 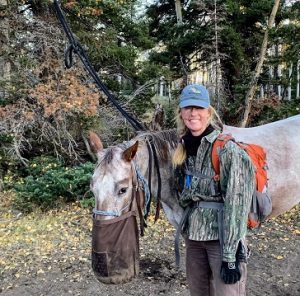 Lucy says, “i ordered the double flake of the first cut alfalfa with a side of whole oats and all i got was a foal-size portion of very dry pellets. the equine food at this horse camp is getting a 2 on yelp when i get home!”

Another fun horse thing:  We were able to film Penny’s  Virtual Competitive Trail Horse Competition videos for October (LT was August (also filmed in the Basin), Sombra got September (filmed at home) and Lucy will be entering for November (filming TBD).

We got all but one done before the hunt began  Here is her water “crossing”.

Once again, we had a lot of fun finding interesting obstacles to try.

I wanted to do a lope-walk transition over a small creek but Penny said that if I was going to make her lope though water while loaded with me and a gob of flopping gear, she needed a pay raise.  She did not even bat an eyelash when I told her LT would have done it for free.

Penny also wants to give a shout out to Sean and Cheryl, who know what they did. Huge hugs from all.

As usual, I am already looking forward to driving down that ridiculous road that is so rough the valve on my horse water tank rattled off on the way home, the jeep wanted to jump out of gear, Richard’s trailer lost screws holding a door latch, and a spring on Cheryl’s front trailer axle gave up the ghost. (So what the heck–Richard removed that axle and drove the trailer home on the remaining axle)