The sun was just suffusing the sky with light when two cow elk stepped out of the golden-leaved aspen grove into the meadow above the East Tank.  They were 300 yards away and didn’t hear us.  The little herd of cattle did.  They skittered and plowed across the landscape with no grace and lots of noise.  For some reason the elk glanced up and then ignored the cows.

Those two elk moseyed across the meadow: graze, pause, look, walk, out of our range.

As we watched, two more appeared from the forest, but instead of heading across, they stopped to snack.  We crept one step at time, from tree to tree, until Richard, who had the only cow elk tag, moved ahead. Jim and I breathed slowly and held still.  The aspens we were in were sparse enough that we still had a good view.

The first two elk melted away into the trees on the far side of the meadow and the newest two, wary now, heads up and looking away from our position, circled in a high trot.  We thought they were going to leave, but they settled and went back to breakfast.  Richard sighted in.

Only one elk disappeared into the trees.

Jim and I continued to hunt.  The morning was still early, so we dropped below the tank and into the spruce-aspen forest.  We came upon the face tree. 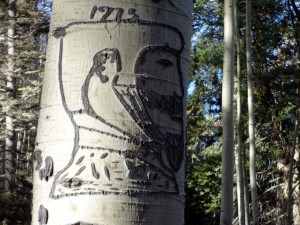 Aspen can develop raised scars when they are carved and the carving doesn’t distort a whole lot over time.    This is nearly 40 years old! When graffiti gets old enough, it becomes kind of interesting.

Jim and I continued up to the top of Toltec Mesa and we stopped to refurbish our internal energy stores. 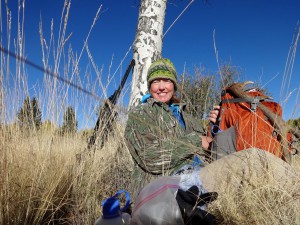 Sun, food, and sharing the adventure with someone (Jim!) enjoying it as much as me! Can’t really ask for more!

We looped east and then northish through thick aspen. We walked quietly but figured the sun was probably high enough now that the elk were bedding down for the day. Of course, as soon as you let your guard down….

I caught movement and we spotted a young bull and a cow.  We moved: tree to tree to tree, but, alas, it was a spike bull (no branches on his antlers, thus too young to harvest.)

We made our way back to Richard.  By now (two hours later) Amber had arrived with mules and Richard had his elk ready to load. 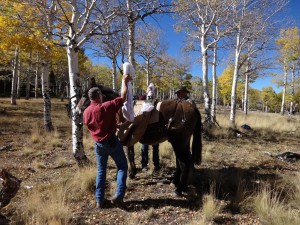 Richard, Amber and Jim loading the quarters. I was documenting!

The late afternoon of the same day, Jim, Richard, Abby and I headed north (and down) to Lower Park, with the plan we’d loop around to Lucky Bull (another open park –meadow– in the trees) and then up to Baldy. 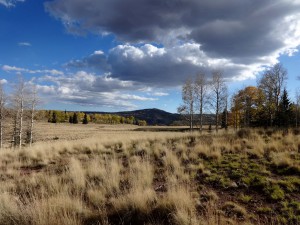 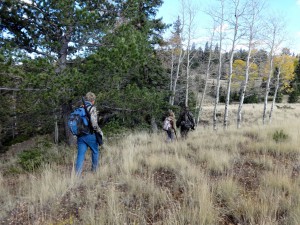 Jim, Abby and Richard. We are going left and down.

As we dropped into Lower Park, bulls were calling to the north, east and west!  That is an exciting, primal, challenging sound. Those guys have one thing on their mind, and it isn’t fear of hunters.

(I still think the afternoon I spent listening to cow elk talking to their calves in the spruce a few years ago was the most magical thing I have heard.  It reminded me of the singing and whistling of whales.)

I spotted a bull on the hillside (I was having a good weekend spotting elk.) It moved down hill toward us.  It neared the edge of the park, pausing as the bull to the west bellowed. Jim got into position.

Our bull startled and bolted up the hill and out of sight. Sigh.

We continued on to Lucky Bull.  We staked out a spot there and waited. As we became still, the elk began to appear from the trees.  We saw several groups of cows and one bull, but the bull was far away and moving north with purpose.

On to Baldy.  The Bull to the West was still bugling and we obliged his call by heading his way.

I spotted something! A bull!  Close…!  Ohhh…Spike.

Jim hiked ahead, up a steep slope.  When we caught up,  he was crouched behind a row of shrubbery in a meadow.  He beckoned us forward.  The young spike was just a few yards away, oblivious to our presence.

As we watched, the spike spotted us and a second spike walked out and looked.  Then a third bull.  NOT a spike.

Me: “JIM!” (stage whisper) “That one’s legal!” I ducked down behind the shrubs.

Jim stands. He saw the two spikes but not the legal bull.

Jim spotted the bull as the elk ran behind a tree.  But then the elk came halfway out.  Jim sighted in and squeezed the trigger.  Nothing.  Safety on.

We could not find a blood trail, but Abby heard a cough in the brush and it was the bull.  Muzzle loaders are single shot weapons, but Jim was reloaded and Richard had a back-up weapon, so it was a quick end.

I am really not used to death.  I don’t raise meat.  I buy it packaged. Death is not easy to see. But we are grateful for the meat and the chance to drop back in time for a bit to an era when getting your own was the only way to hope to survive. 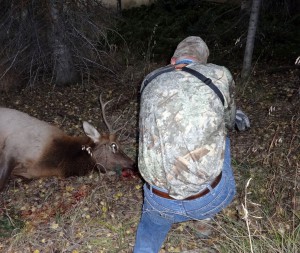 Jim put a sprig of the dominant vegetation in the bull’s mouth and took a moment.

We skinned and quartered the elk with Richard coaching.  By then it was fully dark, so rather than bringing the pack animal in, we  stashed the quarters and the trim meat and headed to camp (thanks to Richard because Jim and I would not have found camp all that easily in the dark. Or at all.)

In the morning we hiked back and discovered both hindquarters were missing!! Both!

Wow, that was depressing.

We decided to search and after nearly two hours, we found one, partially bear-eaten! We stole it back! (The bear was not present at the time, but we saw the prints!) 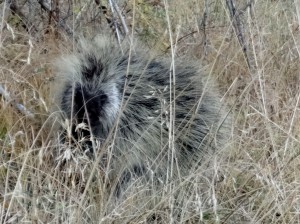 This porcupine did not swipe the meat!

One of our hunting partners had shot a 5 by 5 within 15 minutes and within earshot of Jim’s.  He stashed his quarters, too.  None of his went missing.  Hmmpff.  I guess our guy was tender and sweet. We contributed to the Share with Wildlife program!

Later that day, Lacey packed the elk out.  Some equine really balk at the smell of blood, but she was completely fine. Just like she was fine high-lining even though she had never done that before, either. 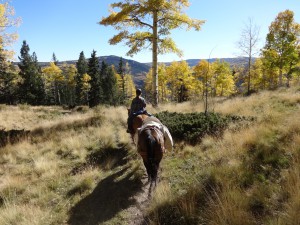 Packing out the meat. 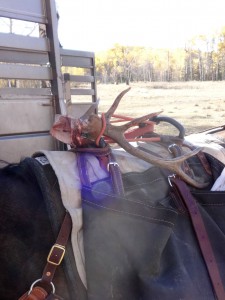 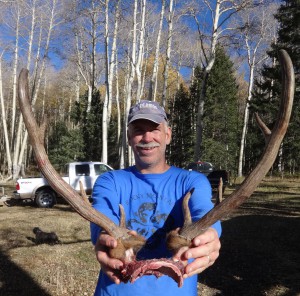 The rack was really big! 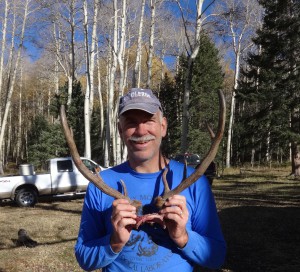 Amber, Abby and Dave left the same day we packed the meat out (bummer), but Micah still had an unfilled permit so we headed back to camp. 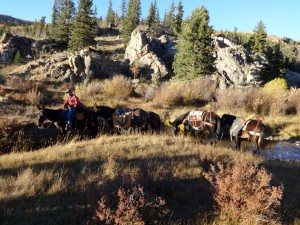 Lacey had a tag, too.  Her first time being the tagged-to. Primo treated her right. 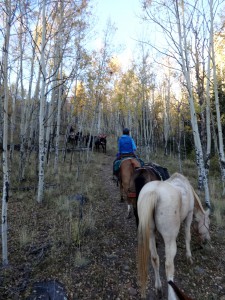 After Micah’s morning hunt the next day, we had to go home. 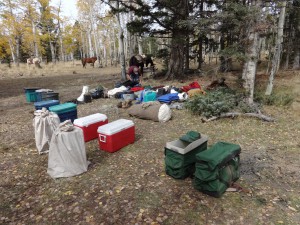 We will get all this on six pack animals.  Only a few re-dos! 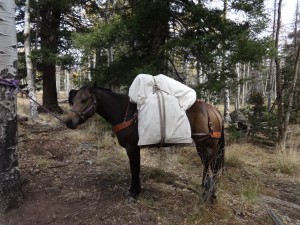 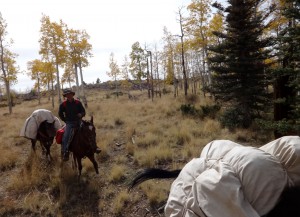 On the way out. Jim with Lacey.  I am on Penny and ponying Molly.  That’s her load in the foreground.

It is hard to take pics and pony, so for the last bit of adventure, there are only words.

Richard had three fully loaded animals tagged.  John was first, then Belle, then Ben.  All was going along well when Ben caught a tree on his lead.  That caused him to jerk back and snap his tag line.  That dislodged a bag of tent poles which shot out from under the manty.  Only the tent poles didn’t actually fall off.  They dangled and clanged and whacked Ben on the leg.  Ben was not amused, and tore off down the slope at a full out run.  The poles clung tenaciously, but the grill and some sleeping bags ejected.

He tore back into sight and went straight at his buddies, tent poles still banging.  His herd, to their credit, edged out of Ben’s way but largely stayed put.  He circled them. They grouped together.

The lash cinch loosened.  The manty began to flap like a big white bat up on his back. The poles fell off and Ben slackened his speed, but the lash cinch was  dragging and wrapped around his legs. He stumbled and leapt up.  The manty came back to life and Ben  was reignited.

Penny informed me that if he came close, she was leaving.  Whether I chose to go with her was, in her mind, optional. I was planning to go with her, since last time I tried ejecting, the result wasn’t that great. But Molly, my pack mule, would have to handle it on her own.

The lids shots off the rubber storage bins.  The partial bag of horse pellets dumped out, the lash cinch caught on a bush and pulled free.  The manty crumpled to the ground.  At last, pretty much everything that could go off Ben was finally gone.   He started to slow again.

We were all yelling “HO!” and Ben came on towards us.  I dropped Molly’s lead line as a precaution, but as Ben approached, Penny decided to stay (all the scary stuff was off him anyway) and he came to stop right in front of us.

Regroup, repack, and we made it back to the trail head at dusk with minimal additional drama.

That was a departure from everyday life! What a great trip!