Last month I entered LT in Christy’s Virtual Trail Horse Competition in the Open division, but LT is up in Colorado with Jordyn, so this month, I entered Mary Ann Shinnick’s 3-yr-old Placitas Mustang, Sombra, in the Green Horse division and Mary Ann entered the Intermediate division on our 23-year-old Spanish Barb, Cometa. 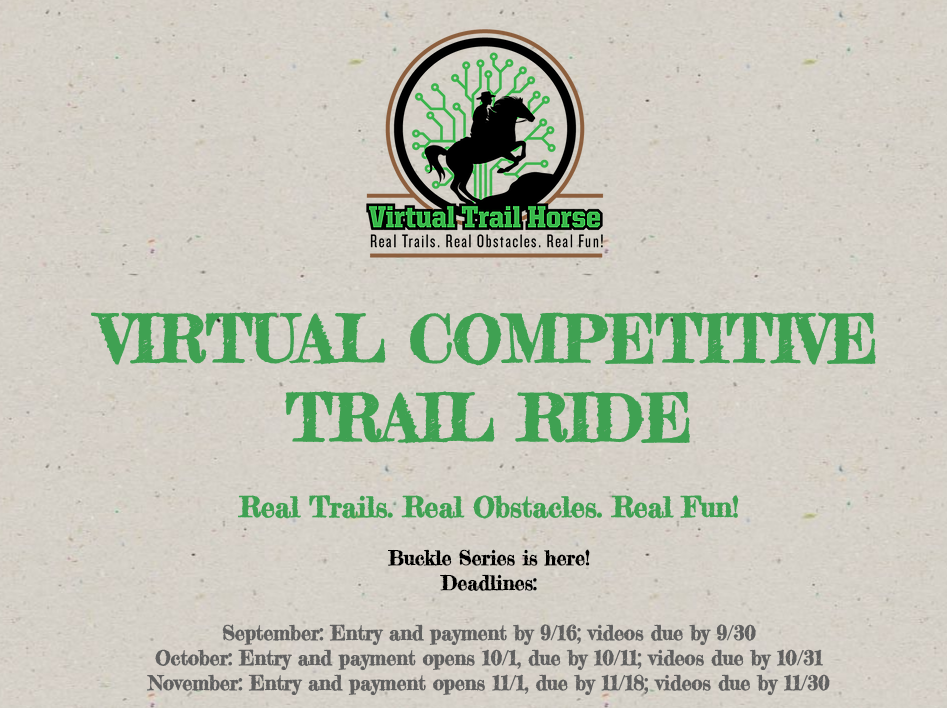 Unfortunately, my blog post is just a little late for people to make the September due date, but I would encourage anyone who likes trail riding and also likes a challenge to enter in the last two events!

Why enter? Well, because it is fun!  And there are a lot of prizes.

For the competition, you get to pick from a long list of obstacles, so as you are out on your regular trail rides, you can scout out places that fit in with the obstacle list.  Mary Ann Shinnick and I trail ride twice a week, so we took a couple days to figure out our locations from our choices right out of the house property.  Last time, I did all the videos while were on a camping trip at the Cruces Basin!

You submit six different videos, so you can pick some really varied things to try out!

The videos are short, so that makes it pretty quick to film. And you can redo them, also quickly, if there is a mess-up.  There was a bloopers post for the August show on the facebook page, and those were funny!

Sometimes one angle makes the obstacle look simple and another angle makes it look harder, so the filming itself requires a some consideration.

Lastly, I have enjoyed watching the horses in action on the videos!

In August, LT placed second and we won some fun loot.  I thought all of her goes were smooth and pretty! But, I don’t think they were challenging enough.

Here is LT’s highest scoring video. (9’s out 10 for the horse and the rider both.  Yay us.  I mostly just sat as still as possible and tried to make her look like a quiet old hand.  Which she sort of is not…it worked!)

This time there are a LOT more entries-over 60–and a bunch in the Green Division.  Even though Sombra is just 3, and has only been under saddle since April, he is a good mountain horse, so I ramped up the difficulty of the obstacles.  (It turns out that the trickiest ride this month for Sombra was NOT all the steep and rocky and intricate stuff we did.  Nope.  It was riding out alone in a big, smooth, wide open pasture!  Maybe he felt too exposed! Silly boy!)

Of his six good videos, there are two I particularly like.  This is one of them.

Who knows what the judge will think, but we had a lot of fun!

Mary Ann Shinnick did almost all of the filming for me (Her husband Roger did some, too!), and I filmed her.

She and Cometa have been riding a couple days a week for a good number of years now.  Cometa is super solid, is great with his feet and spooks only about once every five years.  But we have ridden him two handed in a mechanical hackamore for about 18 years (he is 23, remember).  This was not my first, second or third choice of head gear, but is a perfect fit for him.

For this competition, a mechanical hackamore had to be used one handed (which is clearly stated in the rules, so I do recommend reading the rules instead of winging it. Ay!)  So, after getting all our videos two-handed and realizing the error, we switched to a snaffle bit and refilmed everything.  We had double the fun!

Here they are working some deadfall. Cometa has his normal, “I got this” attitude!

All our videos are submitted!

For next month, I might enter Sombra again, or maybe Lucy….Mary Ann may go for the hackamore and one handed.  And we might have to haul our trusty steeds somewhere to attack novel (to us) challenges!

Off to a Trail Project this weekend in the Manzanos, and Cometa will pack tools, but Sombra is staying home and Lucy and Penny are the riding stock.  Maybe we should get some trail video!