There was a tiny little Back Country Horseman project last weekend with a whopping five human participants and six equine. We rode about 30 miles and cleared about 30 trees (mostly small “draggers”, in that you can just drag them off the trail).

The small crew gave me an opening to take Shirley Wilson’s Black Jack, a four year old horse with 40 rides or so; 2 months under saddle, and put some training miles on him while still getting the BCH job done.

The first order of business was to get there Friday in order to work on water crossing. There are creeks and bogs and rivulets and wet spots all over the trails we would be working and I wanted Black Jack to be able to keep up and be comfortable. Because he is quite sensible, and both Penny and Cometa are usually solid mentor horses, I was confident BJ would be fine.

There is a good water crossing 50 feet from our normal camp spot, so after we got camp settled, off we went. 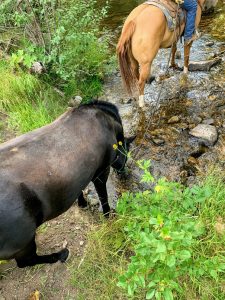 Black Jack was interested in letting his nose check out the water very quickly, but he was not so sure about giving the same privilege to his feet!

“interesting!” said BJ when he got to the edge, “but i am good right here.”

At one point he had all four feet in a bunch on the edge of the creek, whereupon Cometa bumped into him, and BJ stepped in. 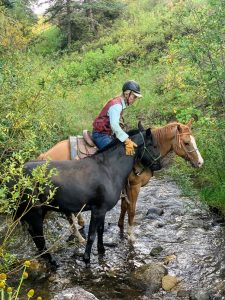 “You are a rock star!” I told him, and because Penny was in raging heat, she also was exceedingly solicitous. Normally, she would have pinned her ears back and informed him that he was really, REALLY annoying.

We made a good number of practice passes until we felt we could manage it under saddle the next day.

Saturday, we set off on time, thanks to Derek and James packing Cometa, as I was being the weak link.

We took the trail from Panchuela to Cave Creek, and BJ was a tiny bit jiggy for a quarter mile.  About as soon as he settled, we got to our first water crossing.  It was not a super tricky one, but it did have a step down and he claimed, “um..maybe i don’t got this…. it is above my pay grade.”

“Nope,” I said, “because you are not getting paid.  You are a volunteer for the Forest Service!”

Everyone else crossed and he still did not want to.  In the interest of getting the crew up the trail, I nearly let BJ talk me out of riding him over and was ready to just have him ponied.  But, the small group size paid off, and all agreed to give BJ a bit more time.

In less than five minutes, he was in and drinking! We went over and on!

We left the Cave Creek Trail and climbed up and up and up on Dockweiler trail.

Black Jack climbed with the best of them and other than wanting to veer toward the cliff side instead of the uphill side every now and again, he felt like an old hand. He has good sense of where to put his feet and is not stumble footed like many new mountain horses.

Dockweiler was mostly clear!  A rare event for that trail!

We did have to move or cut a few things and Black Jack tied well (no pawing, no fretting).  He had no issues with branches or entire trees being pulled toward him, or in one case (on Sunday) falling near him.  When it started to rain, he was fine with the poncho on his saddle and fine with riding in the rain.

When we got to the knee deep bog, Penny and Cometa sighed and went across.  BJ balked.  James and Emma did a controlled leap (but James’ hat took its own trajectory).  Derek and Ishtu (bet I spelled that wrong, but it means Sugar) performed a three-day- eventing horse LEAP.  At that point Black Jack informed me that if those two could not do it calmly, he definitely was out.

Ok.  We ponied him over and he did jump it.

Later on in the day, Penny had a freak out moment (so much for solid mentoring!) over a hunting camp and horses she did not know. I have no clue what her problem was because she has been hunting a bunch and been in many hunting camps with people in camo and dead elk and tents and everything.

In her freak out moment, she 180’d, Jim let go of Cometa, and Penny then ran into BJ, who did not get his tail in a twist and just kind of moved out of her way. Good boy! Penny recovered quickly and then was apparently embarrassed (Jim said).

We did some off-trail dead fall negotiating in a blocked boggy spot (nailed it, and we also cleared the block), more mud,  another a creek, a culvert, a lot of hikers and still more mud and all of that went really well!  We hit Jack’s Creek Trail and took that to Beatty’s trail (#25) to Jack’s Creek Campground.   Then back to Panchuela.  A nice loop and about 13 miles, two good tree removals, one good hole in the trail repair, and a bunch of draggers for the day. 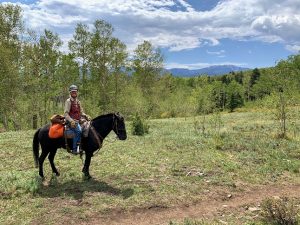 One good horse about to head down trail 25 to Jack’s Creek Campground!

On Sunday, we decided to do an “easy” loop from our camp to Winsdor to Stewart lake to Winsdor Ridge that was, oops, longer, and oops, not nearly as clear as we had expected.

Cometa was packing the tools.  At our first tree of the day, Jim left him loose in front of the fairly high log blocking the trail while Jim tied Penny.  Cometa hopped the log and began to continue on!  BJ took a rest.

The Windsor Recreational Trail takes its time (like 8+ miles worth) getting to Steward Lake! 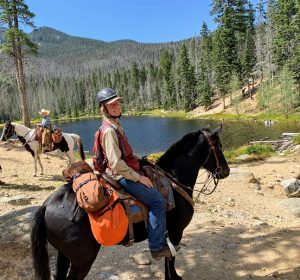 Stewart Lake! Me and Black Jack, James and Emma in the background. 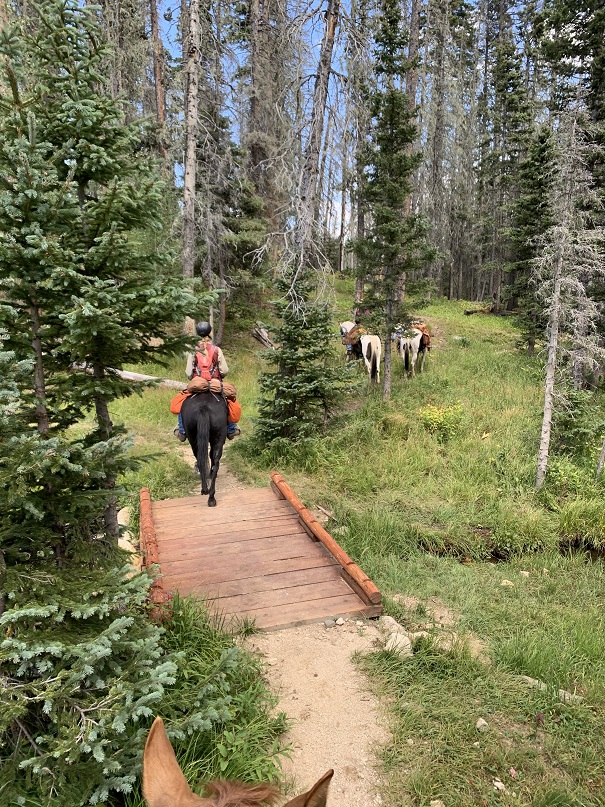 Bridges? No problem. That is a BCH built bridge at Stewart Lake. We helped haul those boards up last year.

We came back on Windsor Ridge trail (7+ miles down). So 15 or 16 miles for the loop, plus the two, to and from our campsite. A very good weekend for the youngster!

Yep, old Black Jack is going to make a solid mountain horse.  Thank-you Shirley for letting me work with him!!