We compost our horse manure and then spread it around the easily accessible acres–which is about two out of 34, so, we have gotten kind of OM’d (Over Manured).  So we decided to rent a big dump trailer from our friend, and use our tractor to fill it.

That concept worked well, but there is LOT more manure in those bin that meets the eye, and to make matters more interesting, just as I was finishing emptying the first bin, the tractor went “thump” and the bucket malfunctioned!  Tt would go up, but not down, unless I turned off the tractor, and sort of pumped the control levers, which allowed the bucket to creep down down as the pressure declined…

But, the one load was done, so off to the transfer station. 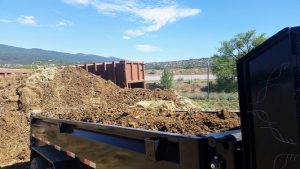 It turns out we are not the only ones that take manure to the transfer station.  It cost $20 for this load. And since this was a dump trailer, up it went, and out slid the manure, pretty much. Wow! That was kind of fun! 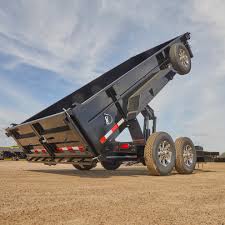 Of course, I lost or didn’t even take the picture, of us actually dumping our own load.  Go figure.

And then we went home to our bucket impaired tractor.  Lucky for us we have a another friend that is a mechanical genius, so he came over and… could not fix it.  LOL.  He could not fix it on the spot at our house.  We needed to get it to him for more in depth diagnostics.

Thanks goodness for the dump trailer!

We backed the trailer into a ditch and I drove the tractor in there.  Simple for all you that do this kind of thing all the time.  Nerve wracking for me.  I employed some breathing techniques to keep calm and got it done!  I was proud! 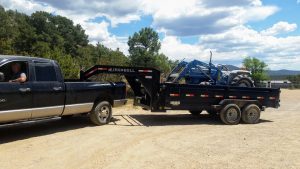 To get the tractor out, (I stayed home), they tilted up the trailer and backed out!

Got the tractor fixed (there was a problem in the hydraulic line that prevented proper circulation of the fluid, so pressure could go up, but not be released properly.  Thus bucket, up, but not down.) We got back to work a week later.

Five or six loads later, all our of our bins are empty and the transfer station guys took pity on our many loads and cut us a deal for most of our trips.  “Our” means “Jim”.  I did a lot of work putting manure in the trailer.  Jim did every dump load.

We figure it might take a year to refill all the compost bins, and at that time, we might splurge and rent that dump trailer again!

2 Responses to “Fun with Dump Trailers”