Last week, I went glamping with three of my friends at Rancho de Fe.   It is about 12 miles out of Las Vegas, NM. We were the first horse guests at this lovely site, and it was pretty sweet!

The ranch is 90 acres with riding access on an additional 200 private acres as well being within riding access to the Santa Fe National Forest. There are very nice view of Hermit’s Peak, to the west! 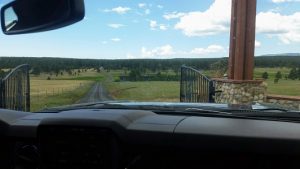 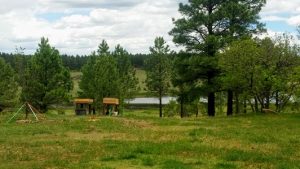 View from our camping spot. 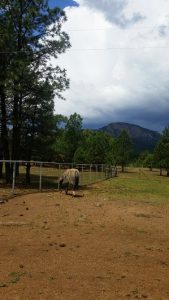 H’s accommodations with a nice view of Hermit’s Peak! 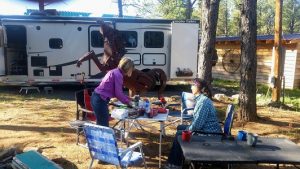 One of our eating areas.

There are two houses and a cabin that can be rented, two full RV hook-ups and dry camping as well.  We chose one dry camp, one full hook up, and the cabin. I split the cost of dry camping with Patty S., and we paid $15 per night, including the horses.

The horses had the choice of big pens or stalls, and we all chose pens for them.

On the first day, Alicia, one of the owners, took us on a tour of the 200 acres, and then we got to play in the pond.  It turns out H absolutely loves water (and does not try to roll in it).  He also does not mind mud.  He is the only horse I have had that actually wants to walk through every puddle he encounters instead of going around!

The 200 acres was pretty interesting and I would not mind exploring there more! 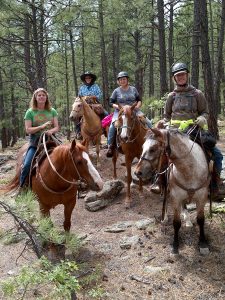 Alicia, Linda, Patty S, and me. Photo by Siri. 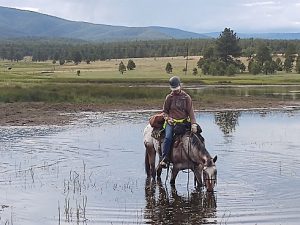 H in the water! Photo by Alicia.

On the second day, we first had a little scare because Linda’s horse, Lily, had escaped her pen by cleverly opening the latch on the round pen where she was staying.  She did not hang around our other horses, but made her way to a fence to the south (the ranch is fully fenced)  and was yearning for something, maybe the Fabio of horses, in the woods!  The rest of the trip, she was drawn that way!

When we got riding, we rode to the forest on the gravel road A2.  Once in the forest, we took a left at the cattle guard.  We rode 15 miles all told: out, made a little loop, and back, all on fairly rugged forest roads.  We did not see anyone else in the forest.   The route we rode had a lot of up and down and some pretty steep spots, so it was not just a plod down a road!  It was a lot of fun!

We had some lovely vistas and never got lost, although we were not quite sure where we were on the road, for a bit there.  I wished I had brought a more detailed paper map, but we had a track that Derek (the other owner) had made on All Trails and Linda and Siri are darn handy with their GPSs!

We dodged (as in they blew around us) some thunderstorms and had really great day. 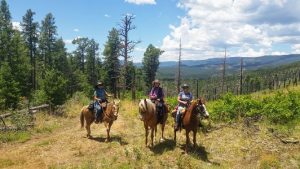 One of the vistas for Day 2. 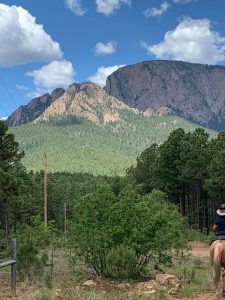 View of Hermit’s Peak from the start of the Forest road. Photo by Patty S. (0r at least I stole it from her FB post). 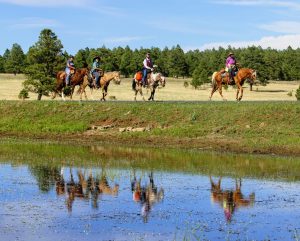 Heading back to camp, Day 2. Photo by Alicia.

In the evening, the neighbors, Melody and Karl, who just happen to be musicians (High Country Junkies) came over with Vincent (an amazing fiddle/violin player with an amazing life so far for a 23 year old!).  Alicia and Derek set up a campfire and the singers sang for us!  I thought was going to be too tired and anti-social to join in, but turns out I really enjoyed it and was very glad they came! 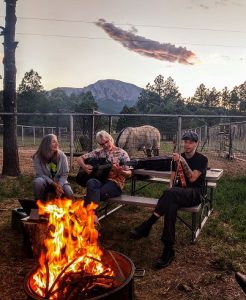 Melody, Karl and Vincent with H in the background. Photo by Alicia.

On Day Three, we headed back to the forest and went right instead of left at the cattle guard.  Alicia and Melody came with us! We rode another mile and a half (or so) to Chavez Trail, 220.  This trail had not been maintained for years but Derek has cleared about three miles of it, so far. It was fun following the old blazes and his new cuts (and we had a GPS track as a back up!–Siri and Derek got their GPSs to do an airdrop type of thing so Siri’s GPS got Derek’s track! They were excited about using this feature!)

The ride to the trail was in a much more heavily forested area and with not much elevation gain.  The trail was also in forest and went UP into the Pecos Wilderness. We gained over 2000 feet in a little over two miles and got up near 10,000 feet on a beautiful ridge.

That made for a 10+ mile round trip day and was just right for out last ride out of Rancho de Fe! 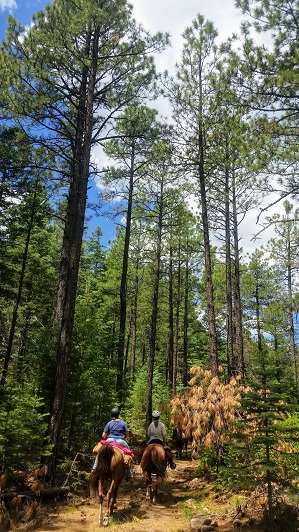 Patty S. and Melody, on the branch to the right from the cattle guard.

I did not get a good picture from up on the ridge but there was a view of Hermit’s Peak, and we were nearly as high as the top of it, but not quite!

We had more fun in the pond at the end of the ride! 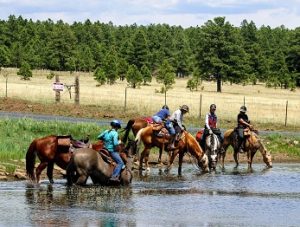 So, if you are looking for a new horse camping spot, on private land, with amazing views, and wonderful hosts, try Rancho de Fe!