Here we are with good weather and no in-person horse shows, so virtual shows have taken off.

Sounds great--get the info, pay some money, video your go in the comfort of your own (or a nearby) arena. No long drives, no all day commitment.

I did my first video class (Ranch Pleasure, a pattern class) with the NM Paint Club show.

It was in the comfort of my own arena, but did NOT turn out to be one and done.

Oh no! There were bobbles! We can’t have bobbles! They had to be refilmed. And since I entered four horses, that took a while.

So, when I got to my second virtual show, The Virtual Red Hot Ranch Horse Challenge, I was semi-prepared.

The first class I tackled was Open Ranch Trail, and I cut the number of horses I was showing from four to two.  I learned that two were going to be plenty. 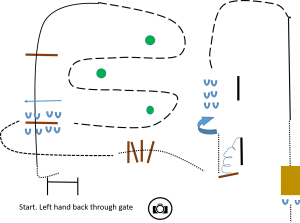 I authored the open Ranch Trail pattern for this show, but, for whatever reason, did not make it with my personal (smallish) arena in mind. I did manage to get it to fit.

The first day of filming was less than ideal. My biggest challenge was the lope over logs.

I put the logs outside the arena, in a “chute” I have, but because one log was also needed for a sidepass, and I have a railroad tie perimeter, I had to put that first log pretty close to the start of the loping area where the railroad tie was not very high…

So, that left only a few lope strides before the first log.

I also put the two logs down at random. I did not measure the distance between them. By golly, a ranch horse should not need to have a walked off distance between logs, especially two logs over 30 feet apart!  They should adjust their stride. I mean, really!

H was not thrilled about the short distance to the first log, so that threw him off, then the second is coming up, so maybe lead change! No! Stumble over it! No! Trot over it! Or maybe leap it, or maybe just get your feet all tangled up over it.

So, I walked off 36 feet between the poles, and this made H’s life quite a bit easier, but not quite easy enough for a keeper video. (And Lucy was pretty happy about the 36 feet, also.)

So, got the logs figured out, but then we had all sorts of of other things conspiring against us!

Lucy was working on a nice first go, but the camera quit half way through as the memory filled up at just that moment…Erased stuff.

Next go: A dog popped out of the trees…Tied the dogs up.

Next go: A flash of lightning. No rain in a month and now we have lightning!…Those clouds moved on.

Next go:  The neighbors decided to rearrange their deck, which made a weird noise. And they are not even that close by, but the sound carried.

Next go: A phone call which killed the video…Put the phone on airplane mode.

Next go: Lucy rolled a log, but I didn’t fix it, and then she could not seem to lope without hitting the second log, even though she was fine before I had bothered to measure…re-measured the logs.

We got down to the “this is the last try of the night” go. It went well until 10 feet before the final obstacle. A rabbit shot across the arena out of nowhere and Lucy stopped dead.

Turns out that even if the rabbit had not ruined the run in the final seconds, the whole video was too dark and would not have been usable, anyway.

So, back at it the next day and got good runs for both horses (I re-reset the logs) for the trail pattern.

And then I realized (thanks to Jenn) that I had walked in a spot that required a trot and, to make that mistake worse, remember, I WROTE THE PATTERN!

But, the next day (Day 3 now) we got the correct pattern, nicely executed, in just two tries with Lucy.

Day 4 was H’s day, and despite more lightning (yes!) and more yard work by the neighbors, we also got it in two tries.

Now on to Ranch Rail, which I already know will go really well until the very end where some major error will occur, necessitating a redo.  Who knows how many days this will take me?!

There is still time to join the Virtual Red Hot Show! https://www.facebook.com/groups/VRHRH/

15 Responses to “A Virtual Headache”