We have had two BCH projects in the past two weeks.  One out of Red Canyon Campground in the Manzanos and one out of Panchuela in the Pecos.

In both cases, we got access behind locked gates, which was nice for us, and the trails!

In the Manzanos, we had 15 people, so we broke into three teams of five and did Box and some of Ox, Red Canyon, Spruce and the connecting part of the Crest Trail between Red and Spruce.

The Manzanos did not have gobs of down trees, so good deal, one fell swoop…or maybe that’s three fell swoops, but we got a lot done while in the appropriate group size, and yes we wore masks. 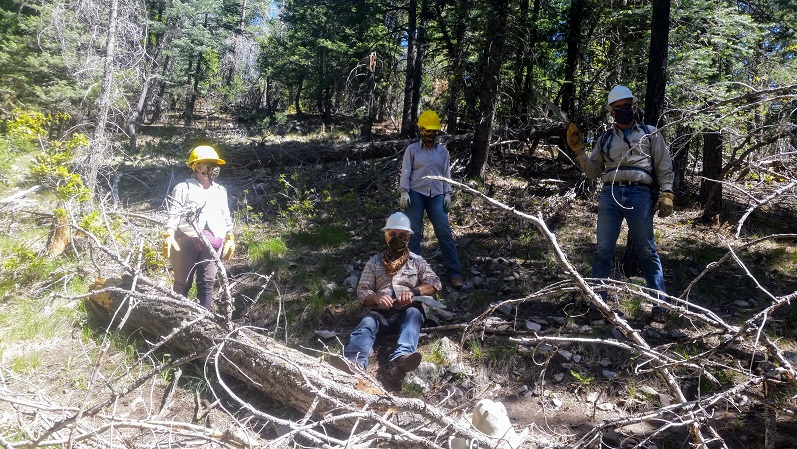 My team did Ox and Box and we did not have that many trees (we cleared 8 easy ones), but it is pretty out there!

Jim rode Penny and Cometa packed tools.  Cometa is 23 this year, so he gets the light load.  I rode Lucy. 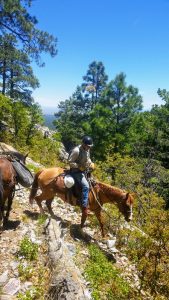 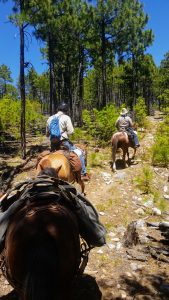 The sky was really that blue. Bruce leading the team home. Jim following.

In the Pecos, we had two teams of five on Saturday and we worked so hard there were only four left standing for Sunday. We spent the whole two days on Dockweiler and cleared around 75 trees (55 Saturday, 20 Sunday) between the Cave Creek Trail and almost (Almost!! So close!)  to the Rito Perro Trail junction. 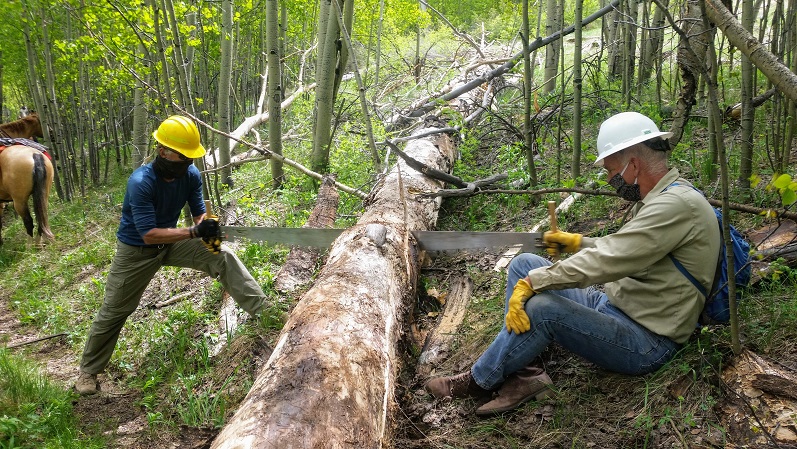 Chuck and Jim, the masked sawyers, on Saturday. Aspen are always falling down on Dockweiler!

There are about 11 more big ones just before Rito Perro, so this weekend we might go up from Jack’s Creek Trail to Dock (more access behind locked gates) and come at it that way to try to finish that off.

Have to see if we will have a crew to get ‘er done!

The Pecos is also stunning.  So many people were packed into the few open areas in the canyon, we were thankful to be able to use the Forest Service Administrative Site to stage our project without crowds. 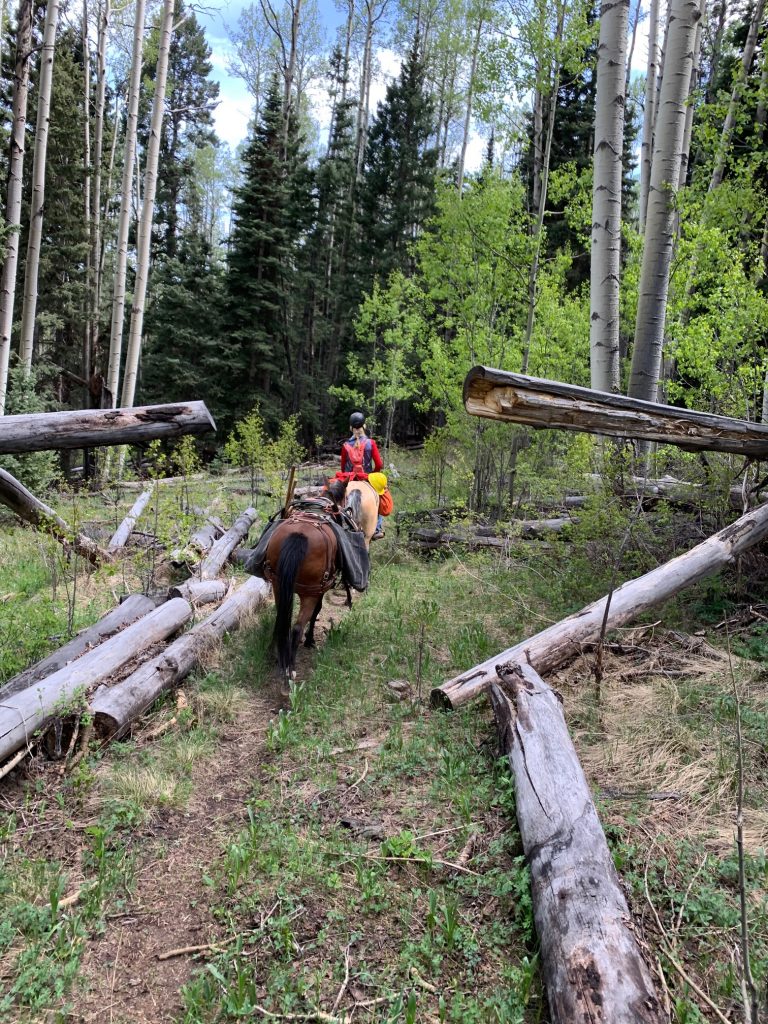 Maintaining this trail is not easy, as you can see from the many years of accumulation of sawn logs. The Pecos Chapter of the Back County Horsemen has had a hand in most of these. Me on LT, and Cometa with the tools.  We are at over 10,000 feet in elevation here. 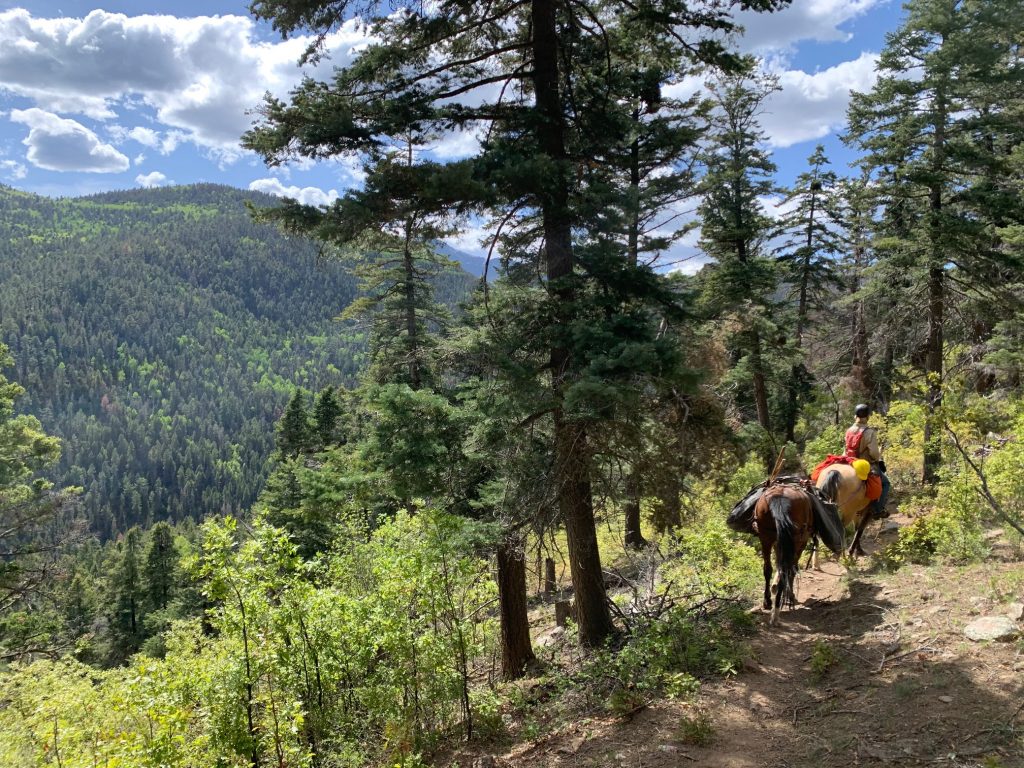 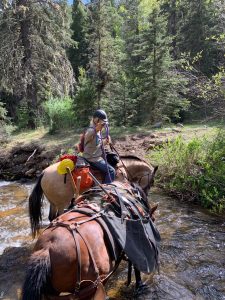 Back down and getting a drink. Creeks are such a treat! Run off for the Pecos drainage is only about 60% of average but much higher than run off for the Rio Grande.

2 Responses to “The Masked Trail Crews”