Dr. Dixon came by on Thursday to give Spring shots, check and “float” (=file down) the horse’s teeth, and check the geldings….uh…undercarriage. 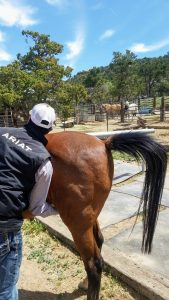 Is anything in there?

And I just realized I failed to get blood drawn for Coggins tests for Lucy and H that just might get to go out of state to a show or two later this summer….drat.

(In the meantime, don’t forget the Virtual Red Hot Ranch Horse Show.  I have not signed up yet–going to finish up my Ranch Pleasure classes for the virtual all breed NM Paint Club sponsored show and then move on to the Red Hot!)

Yep, I can give my own spring shots, but turns out if the Doc is coming anyway, his shot prices actually beat the cost of what I would spend at the feed store, soooo, go for it. Side note: Sombra, who was barely handable and was quite freaked out for his shots last year, was like an old pro this go round!

Now, back to our scheduled topic after all that wandering about.

Vaccines and tooth work we have covered here before, but I haven’t hit on sheath cleaning, that I recall.

Geldings tend to develop buildup of dead skin and secretions on the penis and it has long been standard practice to “clean the sheath”.  However,  this American Association of Equine Practioners article says cleaning is unnecessary and disrupts the normal bacterial community, sometimes leading to other issues.  Since I am interested in bacteria, in part because I teach microbiology, I found the AAEP article and the science from this study compelling.

Thus, I am not a big proponent of major cleaning, but I was still worrying about the smegma “beans”  that can build up in the blind pocket in the penis head.  Large beans can cause discomfort when urinating, I thought. The AAEP article says that is not actually an issue…well…unless the bean grows to be 300 grams in size like in this article!

I had the beans removed.

Some geldings don’t mind being “handled”, as it were, but some really don’t care for it, so it is easiest to do when they are already sedated (as they were for tooth work)!

Cometa had a small bean and Leo had none. Sombra and H didn’t need tooth work, so we left their underparts alone.

Cometa tends to build up a lot a goop in there as well, so here is lovely picture. 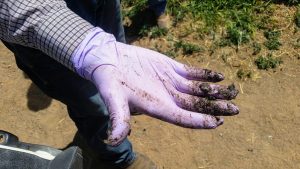 And just in case you weren’t grossed out enough already, here is a short video on bean removal.  I bet the bean in the video is under 20g.  Imagine the 300g monster!

Happy spring cleaning, or not!