The two items in the title do not necessarily go together, but maybe….! 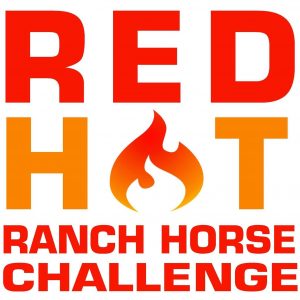 Yes, like this show, only by video and also no cattle, so exactly like this, only different!!

Actually, Christy is the one that thought we should have the show and she has done 98% of the work.  I have helped her by saying things like, “Great!” or  “Sounds good!” and every so often I give a suggestion, and oh, I did make one pattern.

All the details can be found on a new Facebook page Christy has built called Virtual Red Hot Ranch Horse Show!  Check it out!  We have two very good judges (Cindy Chilton Moore and Delena Doyle) and there will be payback money!  Get your videographers lined up and prepare to “come” join us!!

If some trial runs of the W/T trail class goes well with Sombra, he might just get to enter!!

Sombra, the Placitas Mustang, who belongs to Mary Ann Shinnick, came here last July as an unhandled two-year-old.  We did a lot of work to help him become used to being a domestic horse instead of a wild one, and I had him about ready to saddle start at the end of last year.  But between the bad weather and some other colt starts, he got bumped back.  The extra time allowed him to mature a little bit as well. 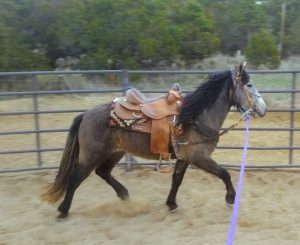 He is very attentive and sensitive in his ground work, but under saddle, so far, he is Steady Eddy!  I am taking him pretty slow, and we are not loping yet, but we are out on the trail and are getting some (baby steps) finesse in the arena.

Here is his first mini trail pattern (the third run).  Mary Ann and I do patterns at the end of our rides and we generally do the same pattern twice, each.  She filmed his second go, except it didn’t actually film, so we had a third go.

Then we went on a ride up the Steep and Rocky trail across the street from the house.  Sombra took the lead, and I rode him one handed while filming, which did not go really well on the first half of the hill, wherein there was a steering fail.  We regrouped and got up the hard half, with the railroad tie steps, in fine shape! We are mighty proud of the little guy!!

This has been a good year for colt starts with Fancy, Coco, Birdie, and Sombra.  I’ve got a new one this month (Daytona).  She is a barrel prospect and I am super impressed with how level-headed she is and how quickly she catches on! Yay!!

6 Responses to “Sombra and a Virtual Show”