Before we get into the woodrats, here are the results from last week’s “You be the Judge” in which Lucy, H, LT and Penny all did the same “ranch riding” type pattern.  Fifteen people, some horse folks and some not, judged via Survey Monkey.

H got four first place votes but only one last place vote and thus he edged out Lucy with 45.5 points! 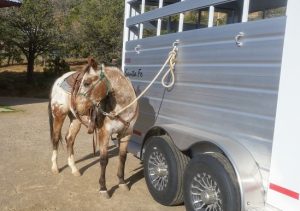 H, who is not a minature horse, next to the new trailer, which, by the way, had a brake problem and is in the shop (under warranty).

The species seems to to be Neotoma leucodon, which according to Dr. Jennifer Frey, is the species that occurs east of the Rio Grande.  I got a kick out of that paper because Dr. Frey was a grad student at the University of New Mexico the same time I was there. She is now at New Mexico State University in the Department of Fish, Wildlife and Conservation Ecology and also serves as the Curator of the NMSU Fish and Wildlife Museum.

Woodrats are also known as packrats and they make middens–normally in the wild, but also in cars and trucks!  And we have had them have a go at getting into the house crawl space, as well.

Despite this annoyance, it turns out the middens are of great scientific interest because “In the arid regions of the southwestern United States and northern Mexico, many pack rat middens have remained intact beyond the limit of the radiocarbon dating method (> 45 000 year).” They are a treasure trove of plant information dating back 10’s of thousands of years!

There is even a USGS midden database!

Well, neither the prospect of our truck becoming a paleontological treasure trove nor the fact that packrats are pretty cute (see this website), swayed us into middenizing the truck (which was usually parked by at the barn with the trailer attached).  We were fine with them living in the barn but when those rats a) chewed through the wiper fluid lines, b) decimated the liner for the hood, and c) packed stuff into the engine compartment that created a fire hazard, we were kinda done.

We tried a a sonic sound producer and Irish Spring (the soap) to deter them.  Neither worked.  Now we keep the hood up.

We also resorted to trapping them. We got two.

They are  solitary, except mothers with young, and have home ranges around 25 meters, so we cleared out the current inhabitants, BUT since nature abhors a vacuum, you can bet someone will try to sneak in and establish residency.

Bad idea, woodrats, as we will be continuing to trap, as well as keeping the hood up on the truck. 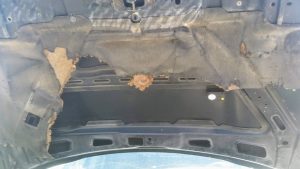 Chewed lining and a sonic sound emitter, which did not deter the rats. 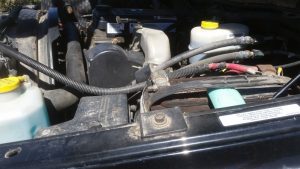 Irish Spring soap was a fail. 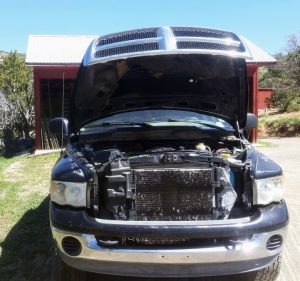 So far hood up seems to working, along with the tiny factoid that we trapped out the most recent residents.

The rats were ahead in the woodrats vs. humans contest, but I think the result is tilted towards the humans, now.