Well, it is still January, and unsurprisingly, it is still cold (whine), but this obviously has had no bearing on the manure producing ability of our equines.

Man, it is a lot of poo.  So, I have been contemplating new and novel (to us) ways to use all that s**t up.

Right now we compost it.  It has been difficult to find good tarps to cover the bins to keep moisture in so that composting actually occurs, versus horse apple mummification. It is pretty dry here in New Mexico, a lot of the time.

We had a roll of some sort of plastic-ish stuff (I know, plastic) that we used for years.  It was relatively long-lasting, but it did do what plastics do, and broke up into small pieces, some of which are still hanging around the place, not degrading.

Ok, we ran out of that, and tried big heavy duty tarps.  Fail.  They are also some sort of environmentally unfriendly plastic, but even worse, they fell apart within six months of use in the NM sun.  Now we have blue bits of those hanging around with tan bits of the other and they may make a nice archeological find for someone, one day.  “Hmm,” they will say, “These people sure liked to use plastic. No wonder their whole civilization collapsed.  But at least they were composting.”

So, we went to a more cloth-based heavy duty tarp, from Tractor Supply, at 100+ bucks each, and they seem to last through one composting cycle, and maybe will even make two, so still not very long-lived, but at least they don’t seem to fragment–just tear. 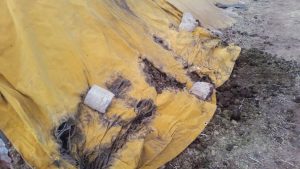 Composting manure and the tarp, too, to some extent, apparently.

We might try to find out what material the fermented cow feed is covered with at feedlots.  Probably a really heavy plastic…

So, there is that.

After composting for six months or so, we use the tractor and spread the manure out, with the idea that it will further degrade.  But lately, we seem to be piling “compost” on top of “compost”, and we need to decrease the depth so that plants can actually make it from the soil, through the horse manure layer, and reach the sun.  This way we will have green, carbon-fixing ground cover instead of swathes of “compost”.

Here are some of our ideas.

Manure spreaders are not cheap, it turns out!

Discs harrows are not cheap, either!  Who knew! When I was trying to figure what kind of disc-harrow I would even need, I came across a handy worksheet that would allow me to pick the perfect one.

Well, that handy perfect disc finder only works if you actually have a clue about farm accessories.

I called my friend about doing some tractor maintenance and asked him about discs and he noted that I meant a disc harrow. Which just underlines the lack of depth of my farm implement knowledge and explains why the perfect disc finder quiz was a fail on me! I had thought that “discs” were one thing and “harrows” were another.

But, no. A harrow is an implement that drags behind a tractor and breaks up the ground.  A harrow might have tines or it might have discs…and hence a disc harrow is a harrow with discs!   My friend said yes to the tractor work and suggested I call another friend about the disc harrow.  Friend #2 had an old one, so he brought it over!

I used the tractor bucket to unload it off the truck.  It felt heavy and I was kind of wimpy-careful as it dangled there, moving slightly, and making the tractor sway a little under me. Got it on the ground without whacking the truck or tipping the tractor (of which there was little actual tipping danger as the implement was not THAT heavy.)

I got some tutoring on attaching the disc harrow to the three point hitch on the back of the tractor (there are just pins involved so it is pretty easy and no tools are needed) and then I went a-harrowing! 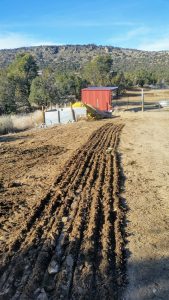 Making those furrows was quite satisfying!

Well, it worked, all except for the minor detail that the discs, which are supposed to rotate, are rusted in place and did not free up even with our little test drag. 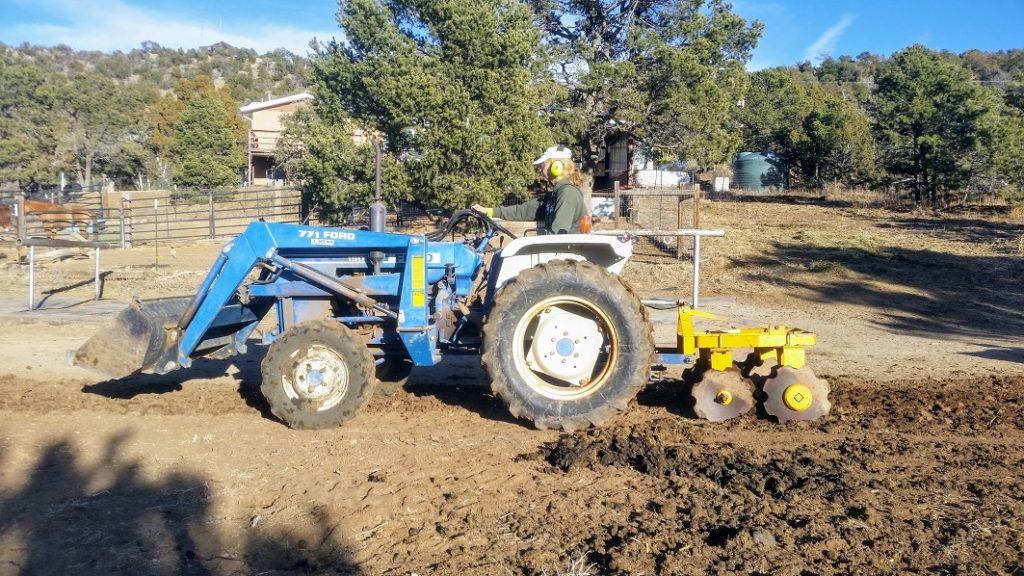 So, Tractor Maintenance Mechanical Whiz friend, agreed to have a go at the disc harrow when he comes to give the tractor a tune-up. (The disc harrow got some TLC  in the form of WD 40, in preparation.)

The disc fix will be my payment to Disc Harrow friend.  Or maybe he will let me purchase the disc harrow from him and then he can rent it back from me if he ever really needs it…hehehe.

But I won’t be making any lovely new furrows anytime soon, because it might be too wet.  This is what happened on Tuesday! 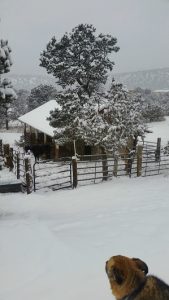 3 Responses to “What to do with all this poo?”