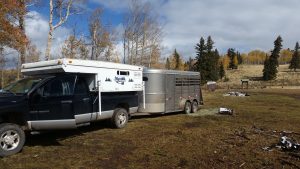 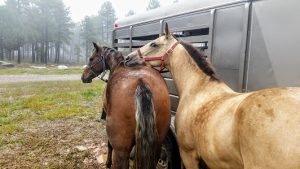 It has been a great trailer and while it is no longer pretty (if it ever actually was), it is still good to haul down the highway or on a 4-wheel drive road to the wilderness.

But, I thought it might be ok to step up and get something a little bit fancier.

But not too much fancier.  And not too too much bigger.

I kinda wanted a Hot Shot–super durable, built to haul cattle…because…I dunno…I seem to favor tough over pretty.  Unfortunately, I also wanted some other horse and horse show friendly amenities along with the ability to go down a rough dirt road. The Hot Shot’s don’t really do fancier. 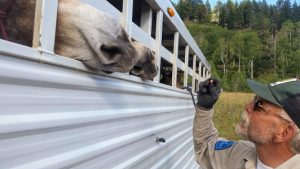 That got me to the stock-combo trailers. They can go down the pavement or down the dirt and can haul other livestock as well, you know, just in case some cattle fall out of the sky onto my property and need a ride somewhere.

The stock-combos still have the open stock sides which I have never regretted having on my current trailer.  But also I can add an insulated sleeping area, an electrical hook-up, a side tack, and slant dividers. 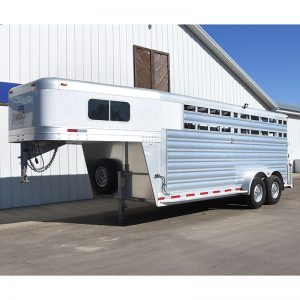 A stock-combo style from an online ad.

The trailer I ended up picking has a horse part that is two feet longer than my current trailer, so a roomier ride for the animals–or we can cram in a extra one if we need to–which I actually did in my other smaller trailer one time…

I didn’t want a manger, as I want the horses to be able to put their heads down (and those imaginary cattle will do better in an open trailer).  I didn’t want a box (the box is the non-gooseneck part of the trailer) longer than 20 feet, either, but settled for 21.

I gave up some tack space and went for a side-tack instead of a mid-tack, because I can always add stuff into the sleeping quarters =”Tack Room” on the diagram. The mid-tack will have a swing-out saddle rack, a swing-out blanket bar, a water tank and as many added tack hooks as we can.  We put more tack hooks in the “bedroom”. You can check out the mid-tack configuration in this video.  The rest of the video shows a trailer that is nothing like mine!

Mine comes with carpet on the floor of the tack areas.  So pretty.  Ha.  There is NO WAY carpet would work for my muddy booted self and muddy pawed dogs.  We put linoleum in the sleeping area and will add area rugs we can take out and wash!  We put rubber on the midtack floor.  Something  we can easily clean!

I am worried no one will recognize me anymore, though!  My current trailer is kind of my trademark!

S’OK!  The new trailer will not be in until May or June!  So, I won’t get all big-trailer snooty until then! Or ever, really, because this trailer isn’t all that big and I traded out the mirror in the Tack Room for more tack hooks.

It is scary going bigger, but also exciting!!