I am still really missing Ed (my cattle coach and friend who passed away earlier this year).  I think he would be telling me that it is time to get moving forward on the cattle training, though.

I have some local contacts in the works; some that could coach and some who might let me MOOch use of their cattle (and I will chip in towards feed).  But that might not be until January,

So, I set up a time to drive to Clovis to work with Clay Hight of Hight Performance Horses. I have been working my flag at home, but was excited to get H on real cattle and get some feedback on Lucy. 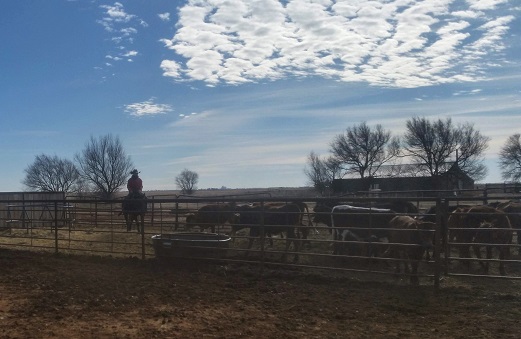 Not the greatest picture I have ever taken, but this is Clay at Hight Performance Horses, Clovis, NM

I was planning to leave between 8am and 9am to make the 200 mile drive, but when I went out to feed, 22 year old Cometa was not hungry.

Cometa is the consummate consumer.  He has never met hay he does not like.

Then he laid down.  Flat out. In the mud. That is not a good look for him.

Got the halter and thermometer and listened to his gut.  He pooped a normally formed, but smallish poop.  He had gut sounds. No fever.  Gave him 10cc of banamine and called the vet, in a bit of a panic because Penny had just gotten over a mysterious viral infection that had apparently killed two of five horses it attacked.

The vet was calm and very kind.  He said to wait an hour and see if Cometa was feeling better. An hour went by and Cometa WAS feeling a whole lot better.  I waited some more and and Cometa started begging for food, so I gave him a small bit, which he consumed as if nothing were amiss earlier.

I was feeling much better about things and Mary Ann S., who leases Cometa, volunteered to check him twice over the afternoon.  I headed out. 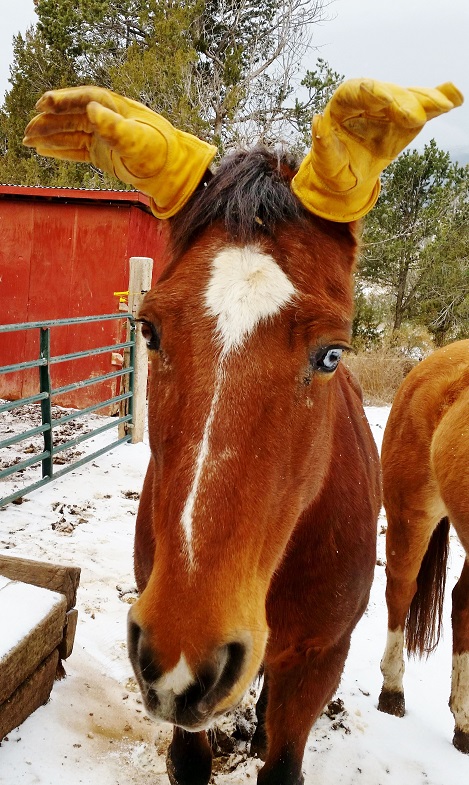 Cometa a few years ago, playing reindeer (at my request).

He was just fine, thank goodness!

If you are crazy enough to try to compete in the Cow Horse events but don’t own cows (and to retrofit our place to hold cows is not a great option, unfortunately), you gotta do what you gotta do.

The drive went really smoothly, and we got there, unloaded and got to work.  Lucy was less than thrilled about the whole thing on Day 1.  “i just got out of the trailer!”, she said.  “i don’t know anyone here!,” she said. “this arena is too big,” she said. Clay was wondering why I think so much of her! (But I still do think a lot of her!) 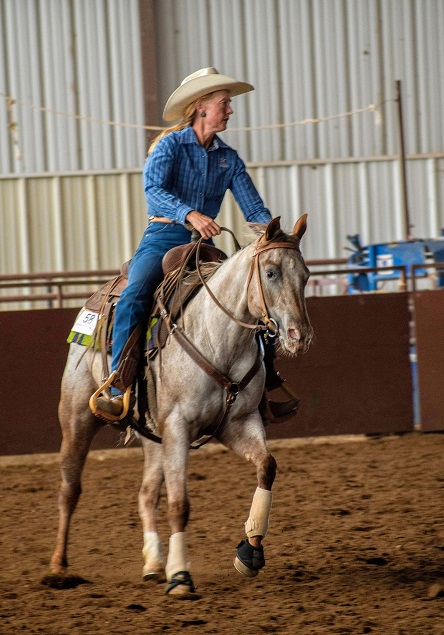 That’s why I think a lot of her–so cute! Photo by Ava Charrlin.

On Day 2 she was much more like her usual self.  I still have holes to fix and I got some really good new ideas on how to do that from Clay!

H was chill while we warmed up but when we starting tracking his first steer, he got animated and gave his first two bucks (ever) under saddle.  But then he settled down. He started getting the idea and even changed leads as necessary as the steer changed direction. Very cool!

On Day 2, we had a little go at boxing, but I have not put enough “back and roll over your hocks” training in yet, so rather than me continue to confuse him, Clay offered to ride him and work on that. It was fun to watch.  This horse is talented.  Very talented.  I don’t mind saying that it is a bit intimidating to be responsible for bringing all that out in the right way!  But, what a gift, at the same time! 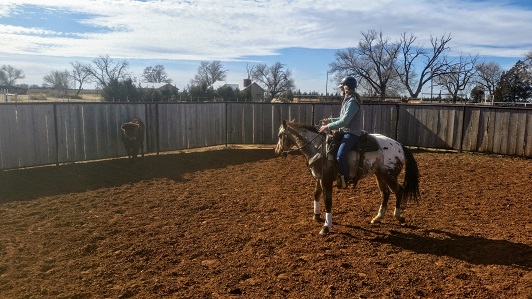 H–first days on cattle! Thanks Clay for taking the shot!

We will keep pursuing our local cow-ntacts and I also plan to head back to Hight Performance Horses in January, weather permitting!

3 Responses to “Cows in Clovis”