I cracked and put blankets on Lucy and H this week. 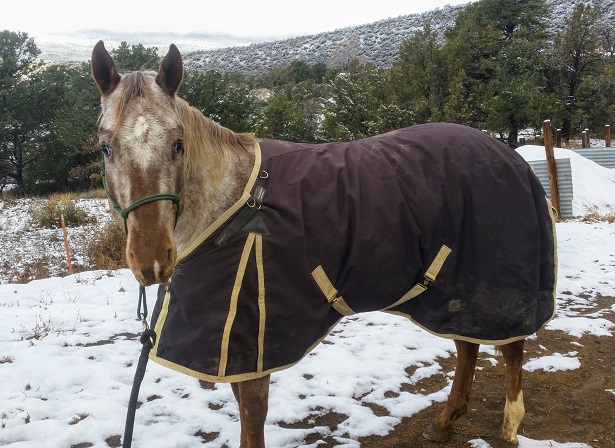 At least it LOOKS cold enough for a blanket!

They were not cold, however.

I just need them to have some sort of hair coat that is acceptable in the show ring. Before next June.

It is sort of late to begin blanketing H.  He still thinks he is still in Canada and he put on a lot of hair, early. But the blanket will flatten his current coat and help him shed out earlier. 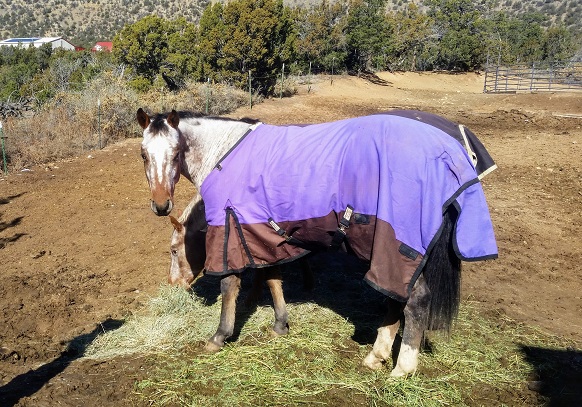 “what? were you talking about me?”, says H. Lucy is too busy eating to notice.

Lucy wore a fly sheet through early September and that kept her coat quite short and neat (which was why she was wearing it, not because of flies…although she did seem to like the protection from those pesky critters), so she was only just beginning to grow out.

I have this weird conflicting mindset about horse management!  I have some World level horses, and I like the challenge and competition of showing, but I don’t like to house them like standard show horses.

I like them to live in big pens and in groups, without blankets.  I feel sorry for them when they have to be alone and even sorrier when they are alone in 12 x 12 stalls.  I have seen big upticks in happiness in some (Judith’s Attitude comes to mind) when they “find their herd”. 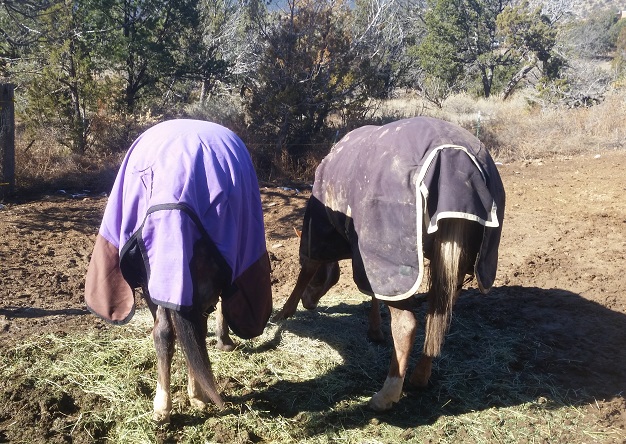 Groups, however can be dangerous.  We have nicks, scrapes and have had more serious conflicts. Horses here for the short term often do have to stay alone, but some owners also prefer the “group home” approach.

We only have one stall with a door and it is full of hay (the stall, not the door), so it is not even possible to maintain anyone “under lights” to develop a short show coat.

(“Under lights” refers to the practice of setting the barn lights to mimic summer hours to fool the horse’s physiology into keeping a shorter coat.)

So, about the only thing I can actually do to get a show coat is to blanket–and only on the body–no hoods–because I worry that the hoods would be too easy to be messed with by other members of the herd. 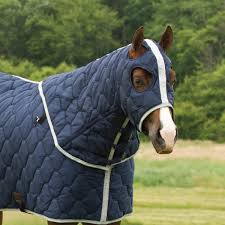 Big D All American Blanket and hood. Picture from a SmartPak ad.

An advantage of having a shorter coat from a training point of view is that the horses stay cooler when being worked and don’t get quite so sweaty.   (But there are  various clip patterns that can help with that…)

A disadvantage of the clip patterns is that they look odd in Ranch Horse classes…and body clipping (the practice of shaving off the winter coat prior to the show season)…..Well, I am not sure if that is legal for ranch horse classes.  Here is what I found in the Appaloosa rule book:

It says nothing about body clipping….so I texted a friend who is a judge and she said body clipping is not illegal for ranch horses, but it would look kind of out of place.

Right, because if these are “Ranch Horses”, shouldn’t they be hairy in the winter?

Ok, I get it, Ranch Horse classes are unfortunately (and fortunately –I really like these classes) horse show classes, so short and shiny coats are quite pleasing to look at while the long, shaggy, sweaty, dishevelled look could distract a judge from “seeing” a horse’s performance.

I do have to say, though, that I have been to the World Appaloosa show in October with three different horses that took home top honors in performance classes with very clean and shiny, but not super short hair coats.

Anyway, after all that mental wandering around, I blanketed the two show ponies (but they are still out in a big pen together with two other horses) in hopes of having moderately short coats to start the 2020 show season!