I have three geldings I am starting this autumn and they fall on a continuum of personality. It is fun to figure out how hard to push and when to go slower. That is something to consider everyday with colts, and generally, I tend to go slower rather than faster.

Coincidentally, I recently read “When Slow is Worse”  (thanks Barb K.) which discussed  the pitfalls of not moving quite fast enough in training (and thank goodness she was talking about A LOT slower than my pace).  Still, the article got me thinking about the differences between the three geldings.

I saw a cartoon on facebook (I couldn’t relocate it) that showed a glaring mare, a glaring stallion and a goofy gelding.  Now H (co-owned by me and Judith Huchton), at two, isn’t actually super goofy but he has a really chill attitude.

He is also responsive, smart, and has a ton of try. You just can’t beat this combination.  He has a high spot on the “Easiest Horses I Have Ever Started” list.  Now, with all that hype, I better make sure I help him live up to his potential in the show pen!! 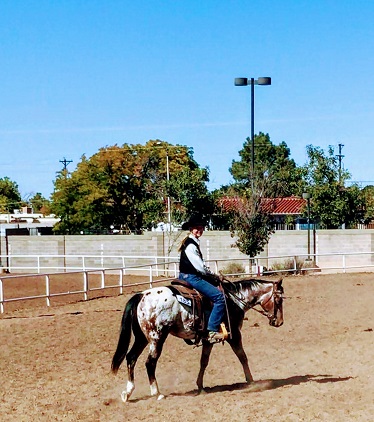 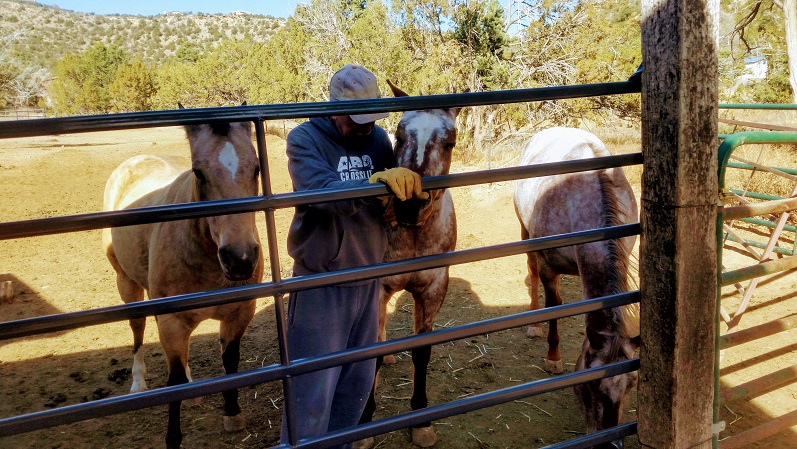 H (in the middle) “helping” put up the new panel. LT (left) waiting to give her two cents, and Lucy (right) inspecting the footing placement. So very thoughtful of all of them! I penned up three others that would have been on my side of the panel because six helpers would have just been too many!

And to add to H’s amazing qualities, he is athletic, willing to move out and quite brave! Oh, and I think he is really cute, too!

So, the “trouble” (and apparently with his sire, also) is that it is easy to assume he knows more than he does.  This could lead to expectations that are actually above his current pay grade, and/or failure to reinforce important details since he seems to have it all down.

This is a nice “problem” to have! But also good to be aware of.

Koh-Doh is three, and he came here the end of September.  He came off a reservation in South Dakota at nine months into a kill pen and was rescued by Julia. 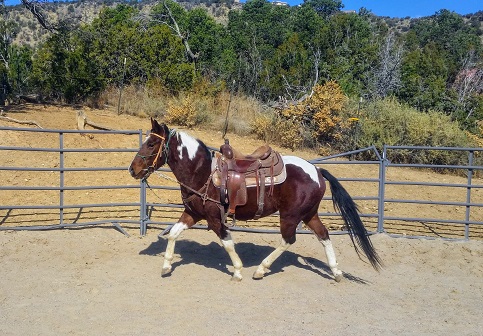 This picture was taken 11/11. After our groundwork, he was able to walk, trot and lope in the round pen with me up there with good relaxation! I was very pleased!!

He had been handled but he still has a bit of a feel of a mustang, in that he is reserved with whom he trusts (he won’t let strangers waltz up and halter him), and each day he kind of questions me to see if I am still all good with him.  (“Yes!”,  I tell him!)

He is basically quiet, but also introverted, and has a level of wariness that manifests as stiffness in his body.

There is no way I want to push him to the breaking point, (“No Drama” is one of my colt starting goals!) but I do want him to gain confidence and soften up.  So, I have had to introduce new things and that will move him into slight discomfort.  Then, with support, he is learning that discomfort does not lead to disaster.

We did 12 days of ground work before mounting.

I sat on him three different days before asking him to move.

We did three days of walking in the round pen and one day of walking outside of a pen with two horses nearby for company, before trotting.

We did ten days (two out on the trail, one solo–he is gaining confidence!) of trotting before loping.

He loped for the first time on ride 16, both leads, out on the trail. A long straight away is easier for a lot of horses for the first loping than my smaller round pen or arena, I have found. I want all the horses to be trail savvy, anyway, because I think it is good for mental and physical development. Also, if I stay in the round pen too long, they seem to get sort of stuck there mentally, and find outside of the round pen disconcerting.

Koh-Doh still wants reassurance every day, especially at the start of our sessions, so this seems like a good speed for him.  I am really pleased at how soft he is becoming!! His increasing willingness to be light and flexible shows he is gaining trust in the process!

In addition to the basic gaits, and going out on the steep and rocky trails, he can stop, back, go sideways, move his hip and move his forehand, open a gate (and sometimes shut it) and go over a bridge (the bridge was weirdly no big deal to him).

Sombra is a mentally a younger feeling two.  He belongs to Mary Ann S. and came from Placitas Wild in July.  He was feral/wild and had never even been haltered, so his starting point was very different than the other two. 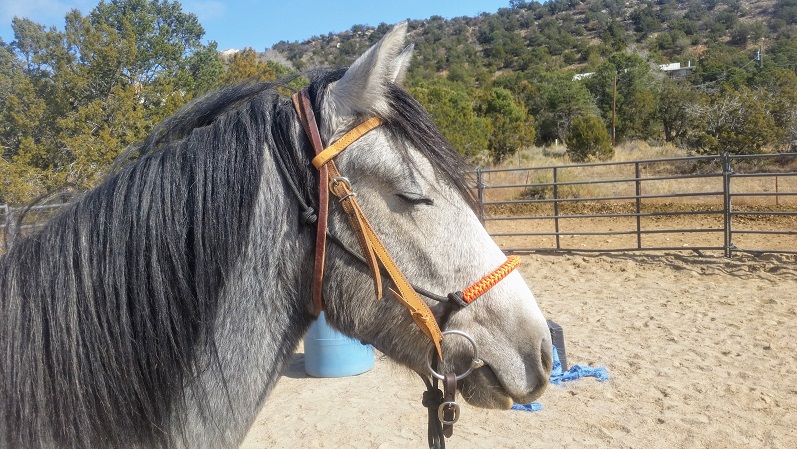 It cracks me up when I snap a shot with their eyes closed! Maybe he is meditating before our session! 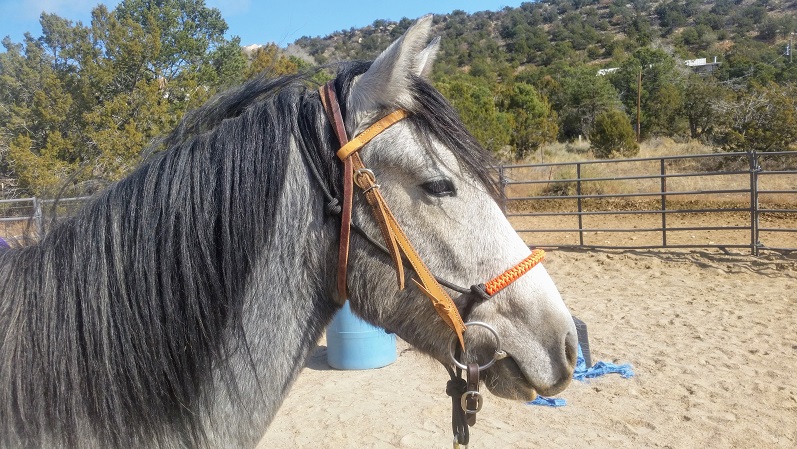 That’s what I was going for, Mr Handsome! As an aside, he looks very Spanish to me, and we have measured him for inclusion into the Spanish Barb Registry.  We haven’t submitted the paperwork yet, but I will let everyone know what happens with that!

He is extroverted, sensitive, opinionated, gets bored easily and is reactive, but he likes a job!  Because he could use some time to mature a bit more mentally and physically, we have decided to hold off riding him until Spring 2020, so that gives me (and Mary Ann) a lot of time to get all his basics in order.

He has had to learn everything from first haltering on up!  He needed/needs  a lot more desensitization than the others (which makes sense since he was running in a wild/ feral herd and he is just a more reactive personality), but he also needs a firmer hand because he is quite willing to just do his own thing!  On the plus side, because he is sensitive, once he focuses, he will respond to the slightest cues and he really seems to step up to a task.

As of today, he can wear a saddle, do lots of ground work, trailer load, and he loves to be ponied out on the trail. We might aim him toward an in-hand trail class for early next year for fun and I predict he is going to be handy and light under saddle, which will make him a great trail partner!

I do love colt starting and the challenge of finding what works for each animal.  I sure appreciate that people send colts starts here wanting me to take the time necessary to create a No Drama start and provide varied experiences for their animals, whether their primary job will end up being in an arena or out on the trail. 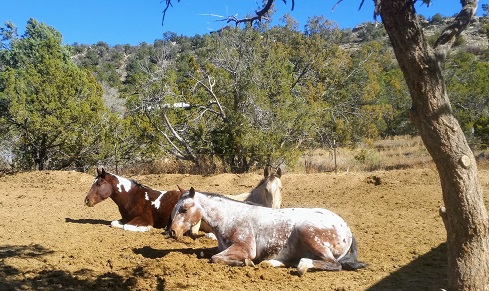 5 Responses to “The Fall Colt Starts”