Last weekend we went to the Cruces Basin near the Colorado border for Jim’s elk hunt. It was a darn site better than last year where all our food flew out the back of the camper on the way there and the snow and wet made it a bit tricky getting out. Click the link if you want refresher on that!

This year we got to enjoy the full Camp Kingsbury instead of the barebones Camp Wilberry! Camp Kingsbury included a wall tent, Richard Kingsbury as camp help and elk advisor, food, nice thick sleeping pads, a wood stove (ahh heat! The best!) a cooking stove (hot food!), lanterns, a latrine and other amenities. It was SOOOO nice. And so nice of Richard to take a weekend and all his stuff to be with us! We bought him a Blake’s Itsa Burger on the way home to thank him!

Camp Kingsbury was actually cached up near Toltec Mesa from the muzzleloader hunt two weeks ago and we rode in Friday with our personal gear, and fresh provisions for equine and human.

Richard Kingsbury rode one mule and pulled a string of five pack stock (four mules and one “bell” mare that all the mules love, whose name is actually Belle!). It was very impressive and beautiful! 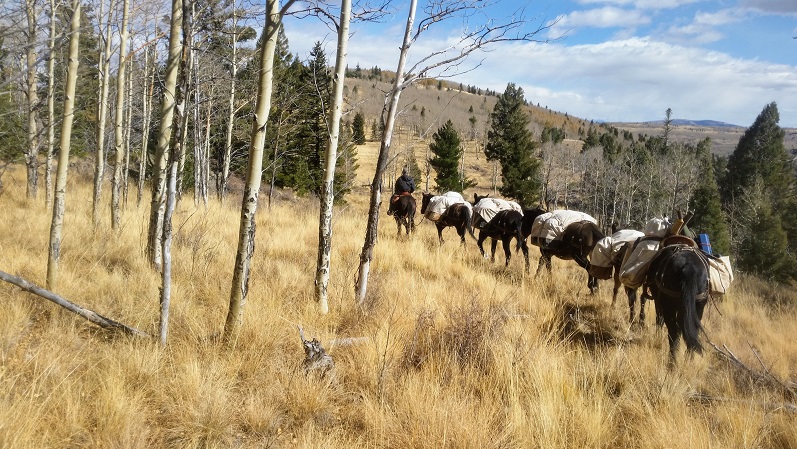 This is on the way out, but was the best shot I got of the full string.

Jim rode Penny (who was perfect) and I rode LT who was…herself… We packed Lucy.

“Wait!”, you may be thinking, “Why on Earth would you take a 3-year-old with such limited backcountry skills as your pack animal?”

Valid point, but this is Lucy the level-headed, and she has worn a britchin with a saddle, so the pack saddle rigging would be no problem.  She is broke to ride, so a pack load would be no issue (she carried horse pellets on the way in and our personal gear on the way out.) .  She knows how to be ponied. Hobble training has to occur somewhere, so why not in a big meadow with eight other equines for company?  Lastly, she ties well, mostly, so the highline should work.

As predicted, packing Lucy up went without a hitch….  “Without a hitch”… where did that phrase come from? The Internet did not answer that question to my satisfaction, and in fact Lucy actually went off WITH a hitch– a box hitch to stabilize her load of pellets.

We rode the three miles in during a break from intermittent snow (not to exceed an inch, the forecast had assured us, which was correct.)

The only glitch we had was water crossing.  Jim forgot that this is not yet a ho hum event for Lucy, so when he hit the first creek, Lucy balked and said, “what?  water?!  no one said anything about water!”  I gathered her up, and gave her back to Jim.  He brought her close to Penny and Lucy stepped right in, but she declined to drink. 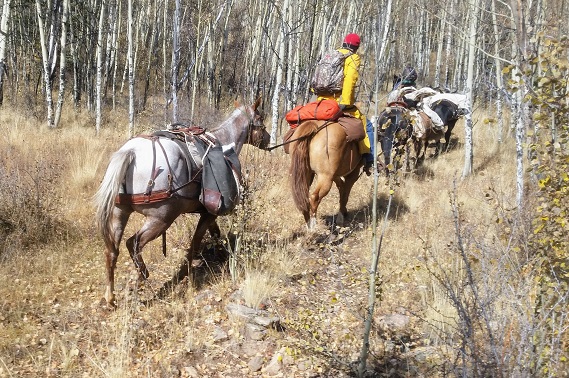 Heading up onto the Mesa! I started off ponying Lucy, but LT was not enjoying it, so Jim and Penny took over.

LT worked herself into a full on sweat on the way up the mesa.  She tends to be a bit emotional.  I had pre-worried about that along with the forecasted cold and snow and I had packed a blanket for her.

I then packed one for Lucy, too, since she has been wearing a sheet at home and is not very haired-up.  What the heck.  I also brought a waterproof sheet for Penny so she would not feel left out.

Since the snow was coming down pretty hard for a bit while we were setting up camp, I was really happy to have the blankets.  No one, it turns out, got cold, including the more winterized, unblanketted pack string. 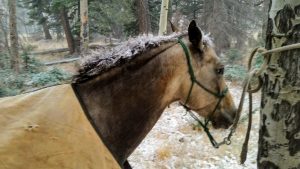 LT was a sweaty girl. Happy to have the blanket for her, 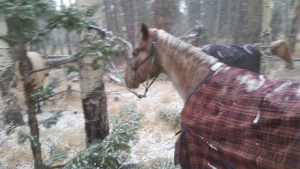 Lucy’s hair coat is pretty short, so I thought she needed protection from the elements. 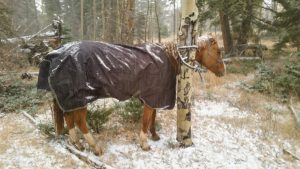 Penny I wasn’t too worried about but that rain sheet is pretty light, so she got to dress up, too!

We highlined and Lucy was not so very sure about that rope above her head.  She is not a fan of hoses on the ground, in general, either, although she can drag a log on a rope just fine… 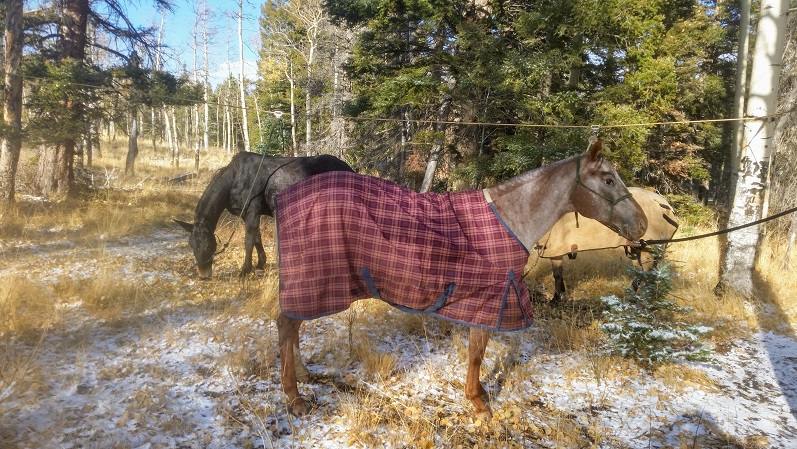 Everyone else is snacking on available grass and Lucy is contemplating the rope over head. The snow squall had passed by and it was blue sky again. It did not take long before the allure of forage outweighed the weirdness of the highline.

For dinner, Lucy got six pounds of pellets in a feed bag that fit over her nose and hung behind her ears.  At first she said the nosebag was a very poor idea, but once she realized it was full of pellets, she was all in!  At home, she LOVES her pellets.  She ended up eating better out of the nosebag than LT or Penny!

The first hunt session on Saturday morning was clear and sunny.  I didn’t bring the grouse gun so we could concentrate on tracking elk.  Of course we flushed a covey of spruce grouse.  We also saw a nice bull run though a gap below East Tank and into the spruce and we surprised a little spike bull in an aspen stand. No shot opportunities, though.

Midday, we were going to hobble the horses to let them graze. The mules ran free because they will not leave Belle. 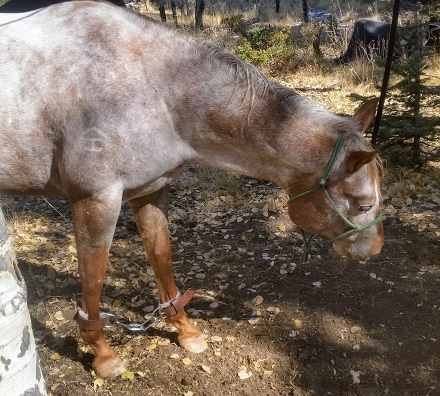 Lucy says “what the heck?! my legs don’t work right!” Naturally, she did not panic and had it figured out quickly.

My head mare, Penny, thought she’d just wander off a bit and take LT and Lucy with her, hobbles or not, so Penny got re-highlined and LT and Lucy hung out.  Later we let Penny go, but retied LT and Lucy.

The second hunt session on Saturday evening was windy.  I brought the shotgun and as we were hunting grouse in a spruce stand by a meadow, we came on a four point bull and a cow.  No shot option.  Later in another spot near East Tank, we saw a cow running hard across the meadow, and on the walk back to camp, we flushed two grouse.  I took a shot and missed so badly the grouse didn’t even fly away.  So, I re-loaded my single shot 20 gauge and tried, and missed, again.  This time the bird did deign to fly away.  Turns out, given the spray pattern of the bird shot, I was just a little too far away.  This brings my grouse hunting percentage down from 100% to 50%.  Last time, I shot twice and got two birds!  Alas.

Sunday morning was windy, over cast, spitting snow and cold.  Oh boy.  My water froze in the tube of my camel back!  We saw no elk.  Sunday evening was still cool, and windy. We saw no elk, but we did see a momma bear and two cubs.  They did not see us.  They were black and fat and glossy! We saw a herd of deer as well. I got chilly on the evening hunt despite wearing about seven layers of clothing. That wood stove was my favorite part of Camp Kingsbury that night!

Monday morning was the coldest yet and midnight to pre-dawn had some pretty serious wind gusts battering the wall tent.  I was feeling pretty wimpy about venturing out into that before dawn.  Fortunately, the wind stilled as the sun was about to come up and it was clear, so there was a promise of sunshine to warm us up a bit.  We stalked around and saw nothing.  Then Jim spotted some “sticks” that looked like antlers.  Because they were antlers!  We had snuck up on a bedded down 5×5!  Jim got to within 100 meters (his range finder is stuck on meters), and gave a deep cough to stand the bull up.  It stood up quietly, broadside, with its entire midsection blocked by a big aspen! When it was laying down, it had appeared to be in front of that tree!  Jim tried his cough to get it to step forward, but it turned and trotted off.  Jim’s downhill shot went high.

Nevertheless, it was a success to get so close without scaring the animal, so here is the “trophy shot”! 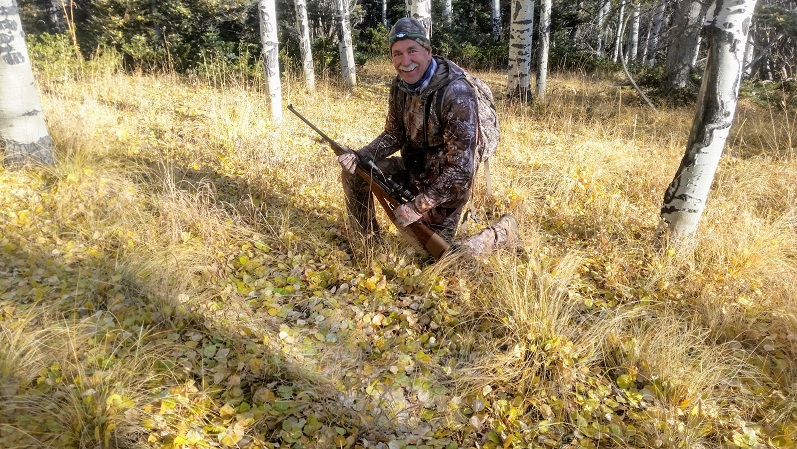 Jim at the bedding site.

We might be doing some more shooting practice between now and next season!

We headed back to camp by 10:30, packed up and headed out.  When we got to the creek, Lucy was pretty thirsty, and at first she tried to reach down a little embankment to get to the water, but her knees buckled!  So, I brought her around almost to the trail, but at that point she decided to get in! 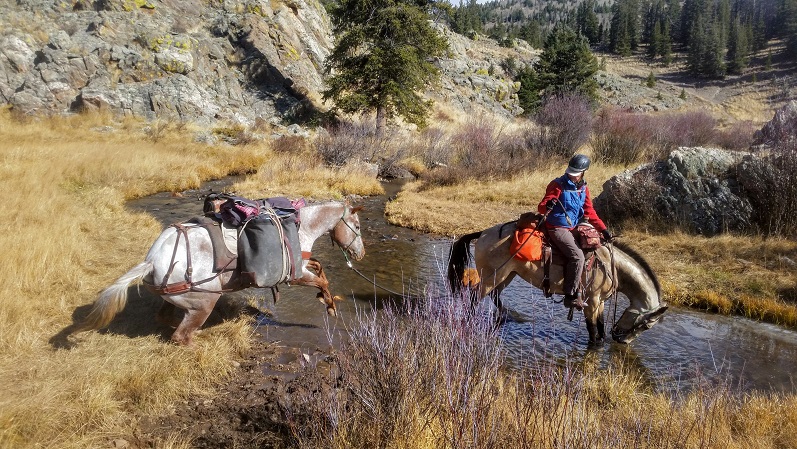 I love Lucy’s expression as she is jumping. Her jaw is set! Her eyes are determined!  But the cattywampus set of her ears tells us that she is a little uncertain (not to mention that she is jumping in!)  The jump was very controlled and once in she drank very well!

It was a grand trip!  I am, however, very grateful that we live in a house with a gas furnace!