My life seems to be a little like living on a hamster wheel (thanks Terri for that image) and of course it is no one’s fault but my own.

Last weekend was no exception, but it did involve Mountain Magic.

On Friday I worked with one of my colt starts (Koh-Doh) and then loaded Penny and another colt start (Sombra) and drove to Albuquerque Trail trailhead in the Manzano Mountains to meet my friends (and meet new friends) with whom I don’t ride nearly enough (because I must keep the hamster wheel rotating).

This area of the Manzanos has maples that turn a lovely red in the fall. The trees arch over the trail and at times it felt as though we were riding in a movie like Lord of the Rings! 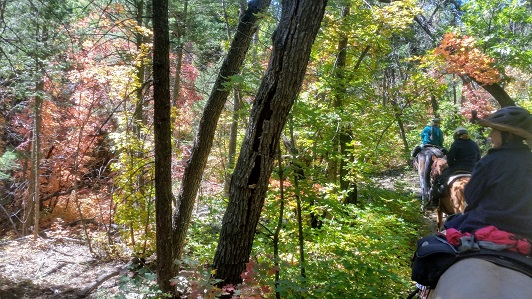 This was a bit magical! Siri in the corner, then  Sandy, then Marilyn at the head of the line.

Sombra is from the Placitas mustang herd. He has been ponying for a little bit but he just learned to trailer load. This was his first road trip. He loaded like a champ, rode great, unloaded perfectly, ponied a little lazily (which surprised me), reloaded and came home like an old pro. 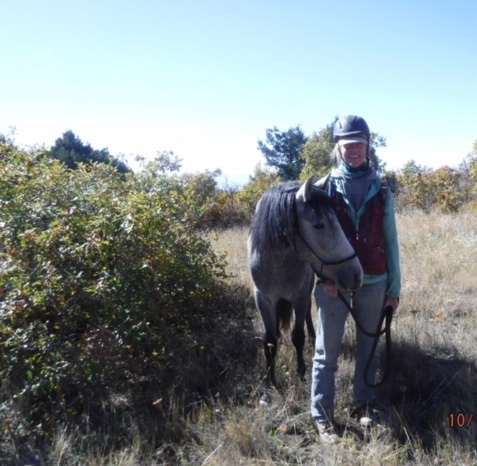 Me and Sombra at the lunch stop. He will get measured next week to see if he can be registered as a Spanish Barb (like Cometa, his pen buddy). Photo by Siri.

So, while the start of the day was a little frenetic, the ride with friends was wonderful and relaxing, even if I was still technically working.

But then Saturday, I had to get up earylish to meet Mary Ann to drive 100 miles to the Pecos to put some carpenter ant poison out at Beatty’s Cabin, which is seven miles in from the Jack’s Creek trailhead.  This was an official Back Country Horseman project (so was that technically “working”?) but Mary Ann and I were the only participants, so what the heck, we made it a loop instead of an out and back and went up on Hamilton Mesa, over to Iron Gate and down to Jack’s Creek. It is a seventeen mile loop, and we had a grand time acting like teenagers and practiced our galloping, most notably up on Hamilton Mesa!

I took LT and Mary Ann had her new horse, Rosebud. We think they enjoyed it as well!  Plus it was a lovely day! 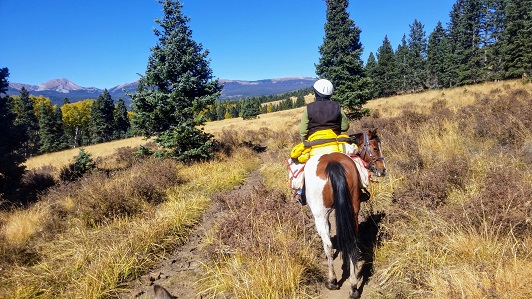 Sunday, I ran a three hour Beginning Trail Clinic in the East Mountains (near home) at Whispering Spirit Ranch.  There was a lovely group and it was fun seeing people do new things with their horses! Then I gave some lessons and collapsed, magic not withstanding.

We are heading to the Cruces Basin Wilderness in the Carson National Forest 10/18.  Jim has an elk tag and I will try for grouse.  Fingers crossed on the weather at Camp Kingsbury, Part II. Part I was two weeks ago when Jim was camp help for a muzzleloader hunt where three cow tags were filled, so hopefully we will have more magic in the mountains this weekend!

One Response to “Mountain Magic”