It turns out I had some time to jot a little something!

The first couple of nights we stayed at the farm pictured below, which had a magnificent barn with some really nice horse stalls at one end, as well as a newer horse barn. 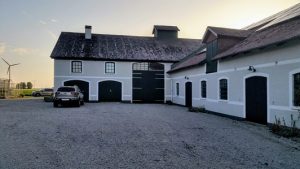 This barn used to be full of pigs! It has since been renovated. It has the apartment we rented and much of it is rented out for storage, as well.

We stayed in the wing above the car and this was the view from the kitchen window. 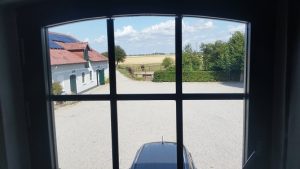 You can just make out a couple of  horses. It was a nice view!

The owner of our lodging had–yes–Swedish Warmbloods and is a three-day eventer. Last week they were in Poland for a competition. 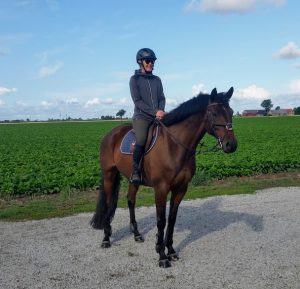 Karin and her competition horse.

She used to use a bumper-pull trailer behind her car(!) but the speed limit for that sort of rig is only 80 Km/hr (50 mph). This is the standard mode of transport for horses in Sweden, because almost no one has pick up trucks.  (We have seen only one!) Fifty mph is pretty slow if you are heading to Poland.  So, Karin bought a”horse box”, which can be driven at regular speeds. 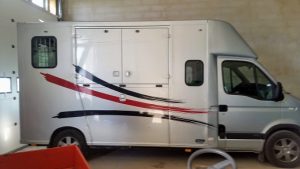 Pretty nice, and very different than what we do!

For the geography impaired (like me), here is a map showing Poland and Sweden. 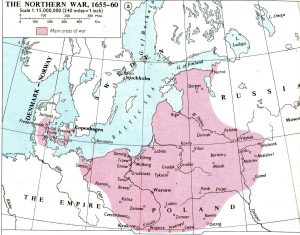 There are ferries from Sweden to Poland…I did not think to ask about the kinds of papers one would need to leave one county and head to another with a horse! 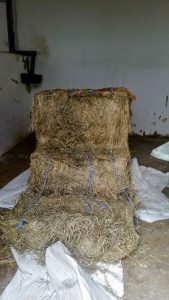 It looked like this before she opened it up. We have seen these all over southern Sweden. 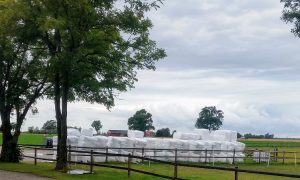 In this method, hay can be baled wetter than we would do in NM, which is advantageous since it rains a whole lot more in Sweden.  The hay then ferments in its plastic wrap and has to sit for at least three months to finish processing before it can be fed.

Also in the picture above, you can see wooden fencing, but the wood is just decorative.  It is lined by electric cord. Almost all livestock fencing we have seen is electrified through heavy gauge wire, electric tape or thick electric cord.

We have seen lots of old stone walls as well.  Electric fencing has got to be much easier to install and maintain, not to mention being more efficient! You can see an electric fence in the picture below, as well as some Fjords!

We saw Fjords! We also spotted a spotted horse that might be a Knabstrupper. 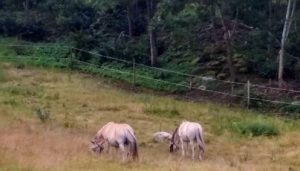 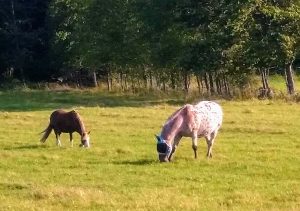 A Knabstrupper? Or an Appaloosa?

It turns out that both Cheryl Pozzi at Whispering Spirit Ranch, breeder of LT, Indy, and Penny, and Heather McLevin at Thunderstruck Ranch, breeder of H, have horses of their breeding lines in Sweden!  We might be able to swing by H’s relative’s place at Stonehill Cow and Show Horses next week (but we have not worked through that plan, yet.)

Once we made it to our second cottage, we found out our host has Icelandic horses! We later went on a bike ride to the Baltic so Jim and Mark could swim, Erika could wade and I could stay dry on land.  Got wet anyway as it started raining and we cycled back in the rain. Did I mention that it rains more here? Anyway, the point of this paragraph was supposed to be that on this two-wheeled excursion we went by a barn that seemed to have lots of Icelandics. 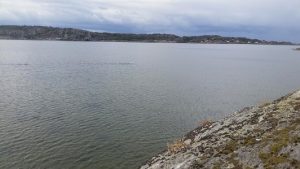 The two tiny ripples are Jim and Mark swimming in the Baltic waters of the Bohuslan Archipeligo.

So, all this horse stuff is lucky for me, because I am, under my 57 years, still just a horse crazy kid.

2 Responses to “Some Swedish Horse Stuff”