The Red Hot Ranch Horse Challenge is in the bag!  Whew!

We had heat, humidity, a flash flood, good cows, and great teamwork by all “our people” and the staff at our venue, NM Expo. Our competitors were just great, as well!! Thank-you all for braving Vesicular Stomatitis. (VS is a viral disease  of horses and cattle that is monitored by the USDA and requires a quarantine if contracted.)

Huge congratulations to Janet Cochran and Rowdy for their outstanding performances!  The points are now audited and they won BOTH the Red Hot and the Ranch Pleasure Challenges (and $2000!!)

Janet also won the saddle donated by Kenny and Nancy King that was raffled off among the top five non-pro riders! 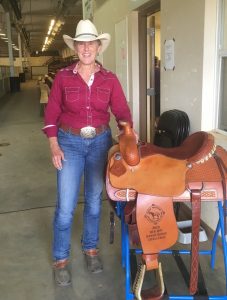 Janet and the saddle! Photo by Joy Roberts.

Here are some of my highlights.

It was great having Mariah, and Jo Ellen and her horse Mocha around!

Atti settled the cattle for cutting and then took two firsts and a second in the class. Considering, she is not really a cutting horse, this was a bit astonishing! I somehow picked out two easy going cows, and we did not “lose” our cows, which is a five point penalty.  Lucy also went in cutting and got last, but still had some good moves! 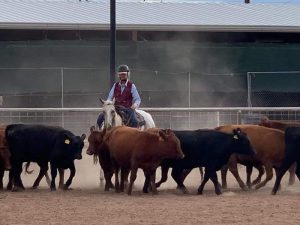 Me and Atti settling cattle for the cutting practice. Photo by Jim.

Anything I know about cutting is all thanks to Ed Krauss.  Ed helped us settle cattle and run the cutting practice on Friday and he helped with the cutting class on Saturday as well.

Atti next went in Jr. working cow horse were she performed some really nice lead changes as required in the pattern, and about five extras as I attempted to run down toward the end of the arena with the cattle. Lucy beat her in that class.

The Red Hot Team made the choice to put ranch trail and ranch riding inside to avoid afternoon thunderstorms that are prevalent this time of year.  We felt pretty smart about that when we had a flash flood on the fairgrounds! At one point the water in the foreground was about three feet deep in the ditches! The outdoor arenas turned into little lakes. 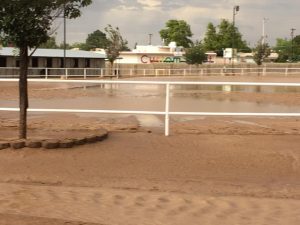 As the flood waters were receding. Photo by Joy Roberts.

We tried a new thing and had our competitors do ranch riding and then, without leaving the arena, immediately complete ranch trail. It was fun doing the ranch riding around the obstacles!  It was challenging doing two patterns in a row.

I managed to do three of my four goes just right, but went off pattern on a loopdeloop trotting part of the trail pattern in go #3 with Lucy. Third time was not my charm.

I seem to be struggling with patterns of late.  Perhaps I need to stop drinking.  At night!  Not at the shows!

I almost blew trail with Atti at the cattle loading obstacle.

On the way out, I pulled the gate latch pin out too far (but I didn’t drop it, like one of my unfortunate friends).  When the pin comes out too far, it is hard to latch the gate, so I was concentrating on that, and my steering went bad. So I ran Atti into the fence, catching my foot and losing my stirrup. Fortunately, I did not totally rearrange the panels, and it felt worse to me than it apparently looked to the judges. 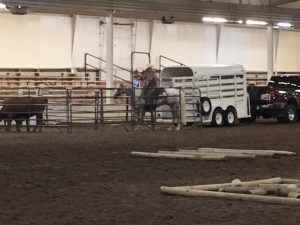 Atti going in the pen to load the two heifers into the trailer in the trail pattern. The cows were super nice and went in and out of the trailer really well for everyone. Photo by Joy Roberts.

I got to show Jo Ellen’s mare, Mocha, in ranch riding and rail. She sure likes to move out, which is perfect for ranch rail class, and also a lot of fun!  She and I are not completely on the same page as yet, so I was sitting up there super stiffly, trying to convince her to stay a little wider and not run over the judge, but not so wide that my knee cap scraped the rail, while trying to make it look like “I meant to do that!”  The judges liked her anyway and she got a first and a second and some Appaloosa points.

Jo Ellen is just starting back to the show ring after missing most of this year.  She did a fine job and she has three more shows and a ranch horse clinic in her sights in August and September!  Way to go!

In ranch conformation, everyone shows together, so Judith (Atti’s breeder and owner) showed Atti while I showed Lucy. Judith tried to get out of this task, claiming she had lost her showing mojo, but alas, there was no one else to do it.  Evelyn, our outstanding show secretary, lightened the mood by telling us about the old cowboys that hate the conformation class and stand there with a hip cocked and shirt-tails untucked, glaring at the judges.

It may be that she borrowed some of my halter mojo from Friday (when Atti got a grand champion mare placing!). Lucy was sort of standing correctly but was basically sleeping and I wanted her to look a little perkier, so I picked up her head.  All this did was jar her from her nap and cause her to fidget and stand cattywampus.

Let sleeping horses stand, I guess!  We got a fourth and two sixths out of six placings, which, of course, I thought was a travesty (tongue in cheek) because to me Ms. Lucy is darn cute and looks like a perfect little cow horse!   More practice on the halter stance is in order!! No sleeping on the job!

The show had wonderful competitors, mainly from NM and Colorado.  Thank-you all for coming and for being such a  great group of people to show with!

Now, we can start planning for next year… in a few weeks because Write Horse is going on vacation to SWEDEN for 16 days.  I am taking my computer, and we are renting a cottage on a horse farm for three nights, so I might just have something horsy to say…or I might wait to post and start that planning until I get back.