Back Country Horsemen, Pecos Chapter, have been trying to get to Red Canyon trail in the Manzanos all season, and we finally made it.  The trail was passable to stock but there were about 10 trees that required the two man saw, and numerous reroutes around those that needed to be rehabbed.

The first tree was this one. Big and high off the ground making it a bit challenging.  Four of us that were on this project are certified sawyers (kinda cool to be a certified sawyer), so we didn’t just start sawing and hope for the best. 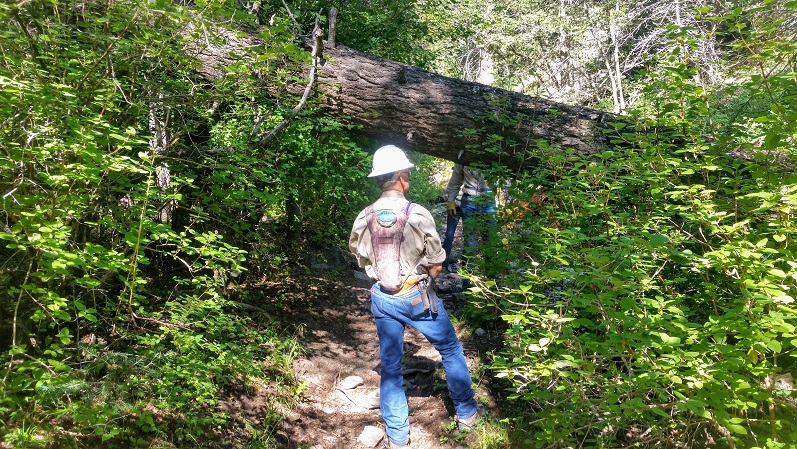 Richard and The Tree.

We analyzed!  The tree was neatly pinned between two large, live standing trees on the uphill side, so there was negligible “side bind” or sideways pressure that would make it swing once it was cut.  There was some possibility that it would slide down hill some, but that seemed unlikely as the slope was not that great and the tree was green and heavy.

So, we started cutting! With a tree this size, we take turns on the two man saw (we work in the wilderness, so no mechanized tools.) The last bit of sawing that gets you through the log is the Glory Cut.

Jim W. got the best Glory Cut of the day! 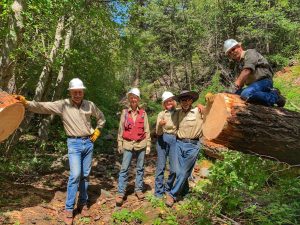 All done! Jim W., Me, Terri and Jim G., Richard. Picture by Amber on Terri’s phone.

While we are busy cutting, the horses are tied.  LT was not a very good BCH horse while she was being a competitive cow horse, but she is nine now and has relaxed a lot.  She even stands still. (I also give her Aloe Gut before I trailer to a project, and while that product is to soothe the gut and reduce potential ulcers, and is not a calmer, I do find that this horse feels less anxious when I use it.) 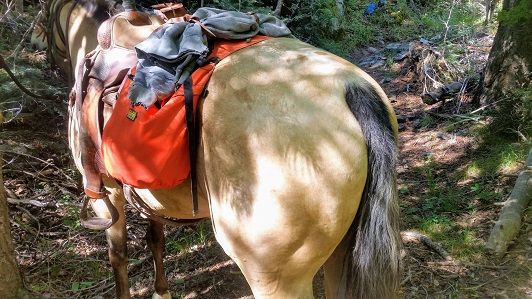 I thought the shadows from the trees on her butt were pretty.

We finished all of Red Canyon and then rode across the Crest Trail to Spruce Trail.  The Jim and Terri Gore had ridden it the previous day, and while it was not clear, they made it.

But they didn’t have a pack animal.  Oops.

We did have to work on a few spots to allow enough width for William the mule, who was packing our tools. There is also one really big wreck that can be skirted by picking your way over a lot of down logs.  LT didn’t love that part, but it was short, so she survived.

The Crest Trail goes along some narrow ridges where you can see down both sides (but it is not scary narrow).  There are some really nice views! 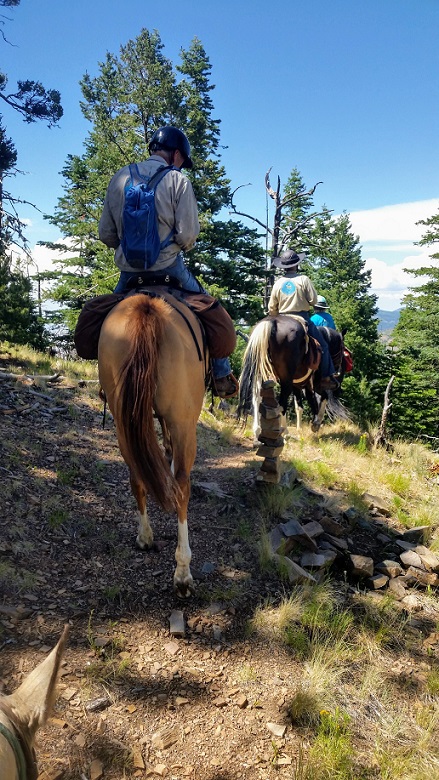 Almost a really nice view, but the real feature in this picture is the Jenga cairn by Jim W’s right foot. And LT’s ear. 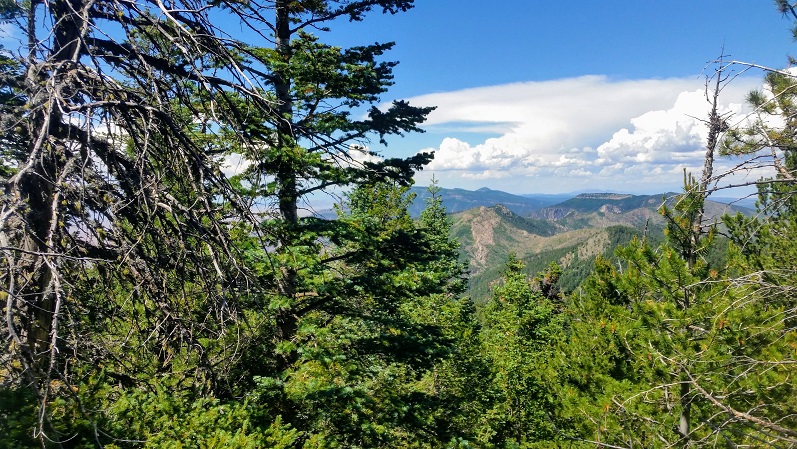 Here is a good view!

We finished the loop by going down Spruce Trail, which BCH had cleared earlier his summer (and we had repaired the spring hose).  Richard fixed a kink in the hose this time (by cutting it out.)  The horses appreciated the spring.

It was a pretty long day–we got off the trail close to 6pm, but wow! Gorgeous country just 50 miles from our house!

Now, we just have to go back and finish the Crest trail between Red Canyon and Spruce!

One Response to “The Glory Cut”