The week of the Fourth of July means a visit by my mom, sister and two nieces. This year it also included my dad and my son and his wife Erika. (They came last year as well and fortunately had a wedding to go to in NM the 6th this year!) Whoop!

We did our traditional East Fork of the Jemez to the Jemez Box hike.  My mom is 78 and my dad is 81.  No biggie.  They made it. 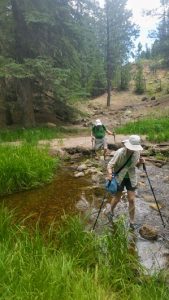 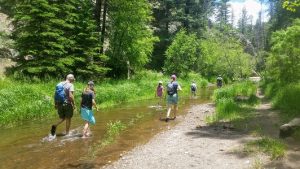 Heading to the Jemez Box.

We then stayed overnight in Los Alamos and went to several museums that covered the Manhattan Project. 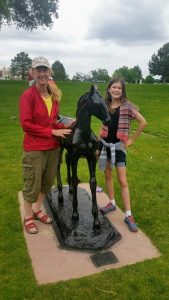 Then, we were off to the Valles Caldera where we intended to hike, but it poured, so we hung out in the visitor center and watched a movie about the Caldera. 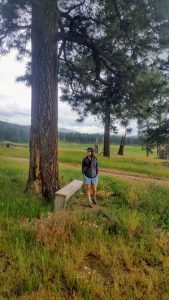 Erika, prior to the deluge. The Caldera is stunning. This is near Longmire’s cabin, in case you have watched that show.

I also scoped out riding possibilities at the Caldera:  Be at the gate by 8, get a permit, which is currently FREE. The rangers will point out trails that might be impassable to stock due to dead fall.  There are 1000 (I swear he said 1000) miles of trails–but that really can’t be right, can it?! Then the rangers will send you out to find a suitable place to park, such as “The Barn” which has a big open area with space for an easy turn around. You have to be out by 4:30 as there is no overnighting in the park unless, it seems, you are hunting.

The Caldera is stunning rain or shine.

Back at the house, I got several people out to ride! Laurel and Maryanne both rode Cometa (on different days), and my sister rode Penny. She even got Penny to trot, an improvement! 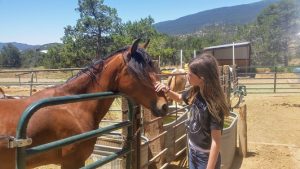 Laurel petting Dancer, the formerly unsociable. Dancer came right up and begged Laurel for attention. I think the magnesium is working. 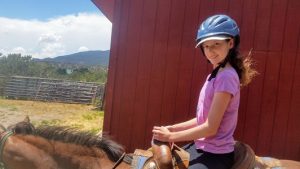 On the 7th we ate Dutch Babies for breakfast to help the US defeat the Netherlands in the World Cup!  It worked. Whoop!

We drove to the top of the Sandia’s and hiked to the Stone House (Kiwani’s Hut).

Now it is back to the normal routine–like getting another horse in!

Mary Ann Shinnick’s Placitas Mustang, Sombra, arrived Wednesday.  He is 2 (he smiled at us and we scoped out his teeth) and around 14 hands.  He looks very Spanish (like our Spanish Barb, Cometa, and also like Dancer, who is a Paso Fino cross.)  He is gentle and has a pretty quiet demeanor, but is not halter trained. Based on his generally low key attitude, it will not be long! 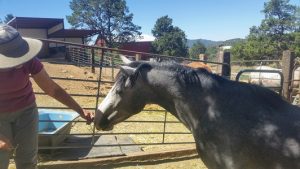 Mary Ann and Sombra just minutes after he stepped out of the trailer. 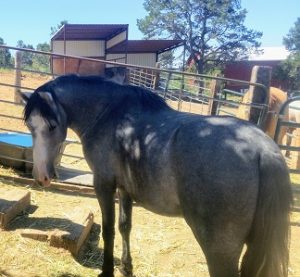 He is quite flexible and when he trots, he picks up his head, tucks his nose vertical and springs off!

No pressure, but the vet is coming to give him his shots next Friday, so I have to have him catchable by then!!

Mary Ann S., doesn’t know this yet, but I am also going to look into possible registration for Sombra with the Spanish Barb registry. I don’t know if he will meet the criteria, but he sure looks close. 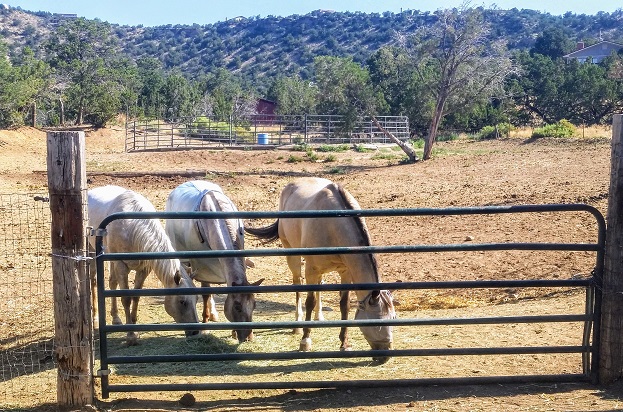 Atti, Lucy and LT did not want to be left out.