First off, happy day after the 4th of July! A lot of my family is here and we did the Edgewood arts and music festival and the car show.

Then, I took my parents for a hike on the hill and the other folks did games in the arena (on foot). We ate chicken grilled cooked on the outdoor grill, chips and guacamole, corn on the cob, cole slaw, ice cream and rhubarb pie (thanks Carolyn!) out on the patio with a nice view of the Sandias.

After a year of waiting, High AF, barn name now H, arrived last Friday! He was bred by Heather McLevin at Thunderstruck Ranch, Alberta Canada. Judith Huchton and I are co-owners and we are excited about him. 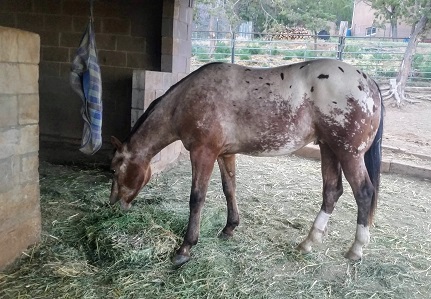 David Cornely, who brought Lucy down from the Canadian border (Lucy is from Connie Hunter at Sunset Stock horses, also Alberta, Canada)  last year, brought H for us this year! What a deal!  (No more new horses, Canadian or otherwise, in the pipeline for next year, though!)

H is two, and is similar in height to Lucy when she arrived.  He is a  bit stockier though.

So far, this is what I have learned about him. 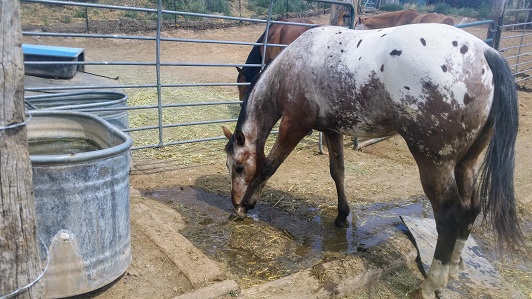 I overflowed a tank, and water was streaming through his pen.  He stood in the running water, drinking!  He also will drink out of the hose.

He ties well.  The first day I tied him, he fretted, but since then, he just stands there (well, he did untie himself once and he will mess with the rope…)

He ponies and is really laid back out in the neighborhood and on the trail, but his feet are not yet dessicated to New Mexico Rock Hard.

He is friendly but not pushy! Yay! He follows us, wanting attention, when we are in the pen with him, but he does not try to be overwhelming!

I took him to Ed’s when I worked cattle on Lucy and Attie on Monday, and H loaded right up and managed to back out when we got there, as well.

H is not bothered by cows one bit. It will be fun to see how he is on cows under saddle–excellent,I suspect! Another working cow horse! 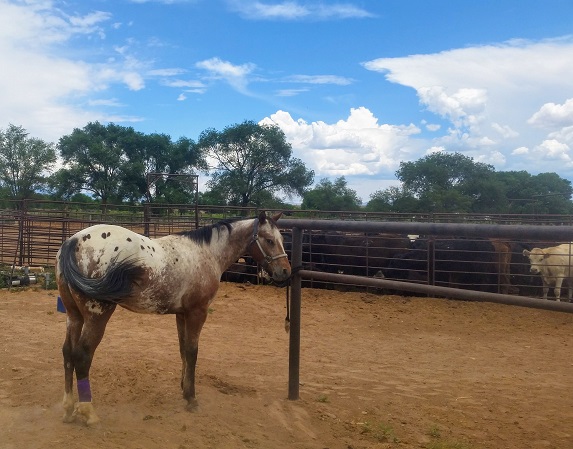 He has the free moving kind of trot I like and that should do well for ranch classes. 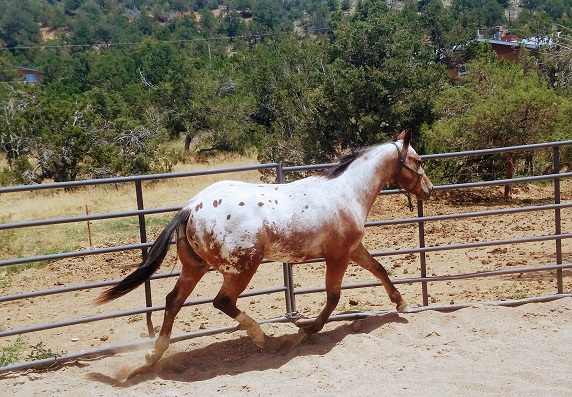 He cut the heck out of his left hind leg last fall, and it will still be a while before it is fully healed.

H didn’t want me to touch it at all, so I was thinking I was going to have to twitch him or something.  Then I thought I’d just use a rope to pick up his leg and desensitize him before I went all hard line on him. As soon as I put the rope on his leg, he stood perfectly quiet and  still.  Don’t know why, but credit to Heather, who doctored him for months!

On the advice of Dr. Dralle, we have ordered Medi-honey paste (really good for difficult wounds, it claims…). We can also can use hemorrhoid cream (Yup, like Preparation–wait for it— H!  This promotes cell growth but reduces proud flesh) and antibiotic cream. We will keep it medicated and wrapped with non-stick antibacterial telfa pads until it finally fills in, which will still be awhile. He will have a nasty scar, but other than that, will be just fine. If does grow proud flesh, we have another product to help with that.

By this time next year, H and Lucy might be the Canadian team for some Back Country Horsemen projects, in between their shows! 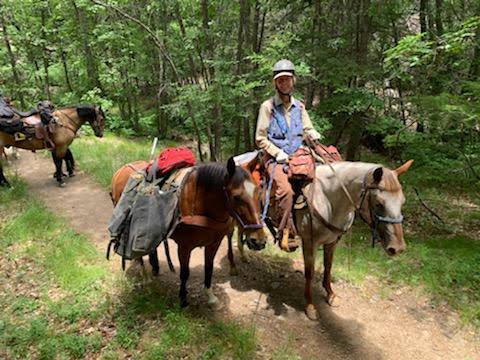 Lucy in the Manzano Mountains 6/28/19, ponying our old guy, Cometa. 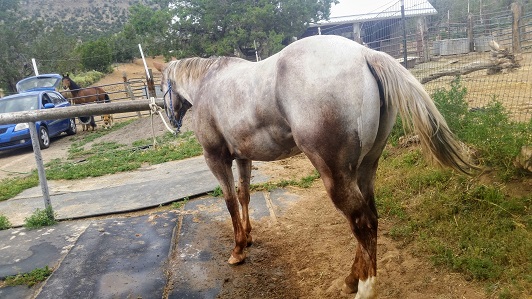 Here is what I do know: He is going to be a lot of fun (and I think he is pretty darn cute, not being biased or anything!)

2 Responses to “H, Another Canadian in New Mexico!”