This past weekend I gave my first (annual?!) Practical Trail Clinic at the Trout Stalker Ranch in Chama, NM. What a great location!  Thanks for hosting! 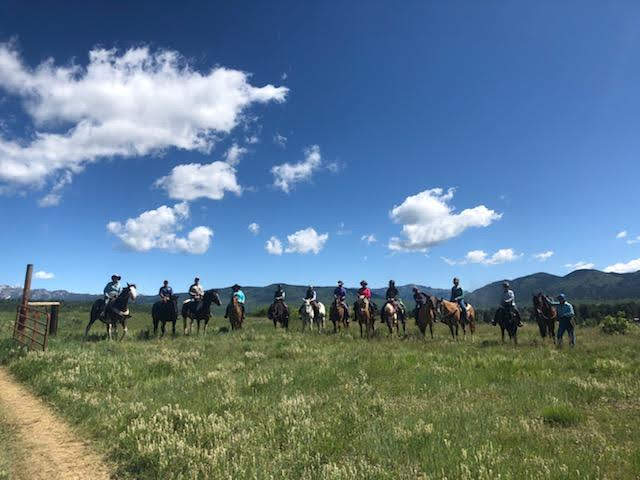 Wow! It was a lot of fun and we hope to make it an annual event! We thought about a second one in the fall but I have a trip to Sweden in August, a new granddaughter due in September and the World Appaloosa Show in October… and Trout Stalker is pretty busy, too, so next June, it is!

Huge thanks to Brittany, the Trout Stalker Ranch Manager.  She managed (cuz she is the ranch manager?!) the paperwork.  She got horse pens, dome tents and a horse playground built for the Clinic. She organized the food, participated in the Clinic, and even put me up in her house!

Speaking of food, lunches and Saturday night dinner were prepared by Brittany’s husband, the Ranch Chef (which may not be his official title) but regardless, he is not just any Chef.  He is a Le Cordon Bleu Chef. The food, needless to say, was lovely!

And now, on to some horsey highlights!

We did some standard ground work, but with emphasis on how the various moves might be useful on the trail. The time flew right by! It was fun for me to get to work with different horses and people.  It was great to see the changes everyone made and hear what people learned about their 4-legged partners! 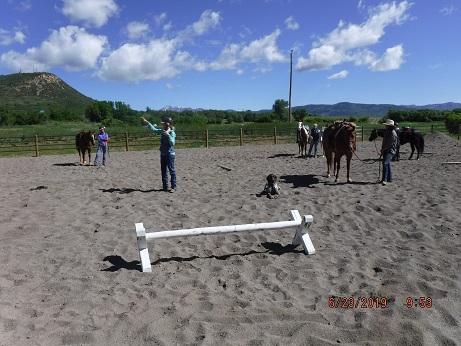 We did some riding arena work, emphasizing body control items like stopping, turning and backing and why these were valuable in a trail horse.  We barely got out of a walk and I was worried that our lack of speed might be boring, but it turned out, perhaps because of the idea that the moves could be applied to the “real world”, it was not! 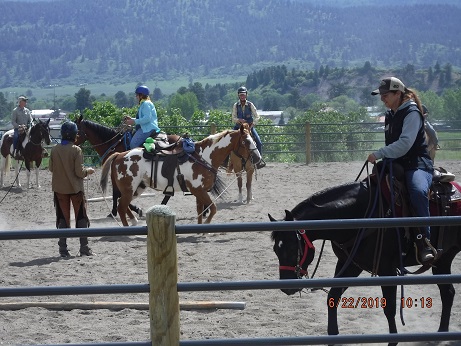 Then we hoofed it (haha) to the playground.  There were two ways to get there–over the Saggy Bridge or down Pig Alley (thanks Colleen N. for the great moniker!)

I lead us on the bridge route to get to the playground because the pigs on Pig Alley had a way of popping out of the woods and causing horse hysteria (ok, more like horse anxiety, but I couldn’t let go of the alliteration in “horse hysteria”). (We came back on Pig Alley.)

There are no pictures of our trips up Pig Alley.  Everyone was too busy monitoring the pigs and helping their trusty steeds!

I had scoped out the bridge the day before.  It was 8 feet wide, the planks were 2x6s, and it really did not look that substantial.  Underneath, however, were three 6×6 beams.  There were no railings and the irrigation ditch was running full at two to three feet deep. We all led our horses over the bridge the first time, and found out that it had a lot of give under the weight of a horse.  A bit disconcerting, but hey, a great obstacle for a Practical Trail course! The Saggy Bridge! 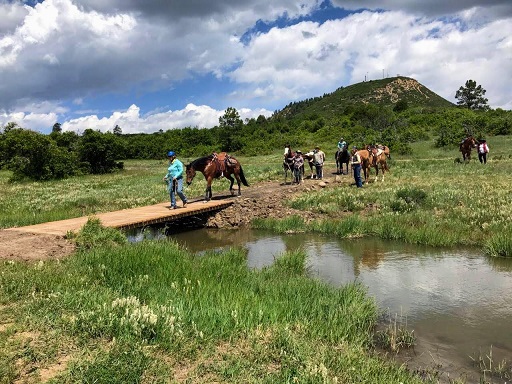 Colleen leading Rascal over the Saggy Bridge. Some horses hesitated once they got on, but similar to Dory the fish in Finding Nemo, my advice was “Just keep moving! Just keep moving!” Everyone did great and many horses were able to ride right across the next day. Photo by Natalie.

Down at the playground, the pigs made their appearance and some horses were a bit thrown off, but since the pigs were pretty calm, friendly and out in the open, most of the horses soon ignored them. 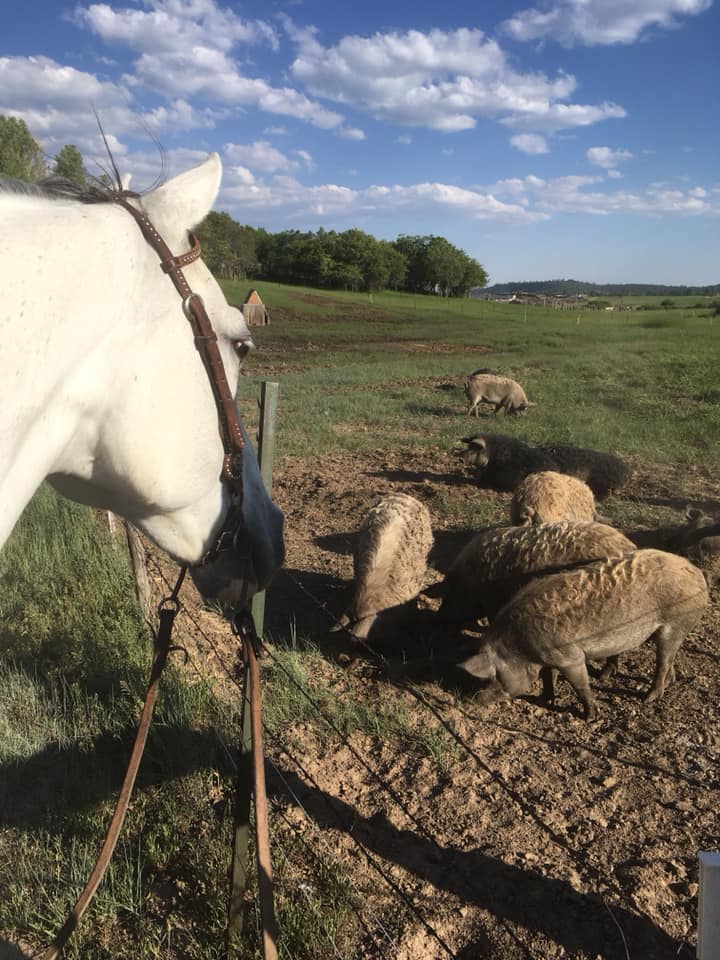 Rowdy was wary at first, but soon he was down with the pigs out in the open. Those along Pig Alley still haunt his dreams, though, says Janet!

The playground was fun! There was a “cowboy curtain” which helped prepare us for Sunday’s scrub oak bushwhacking 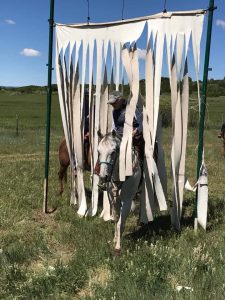 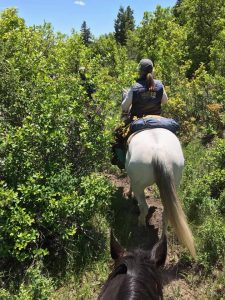 I think both these photos are by Natalie. In the second photo you can see the rider ahead of Janet, obscured by the oak and Natalie’s horse’s ears!

There was a tippy bridge (in addition to the Saggy Bridge!) 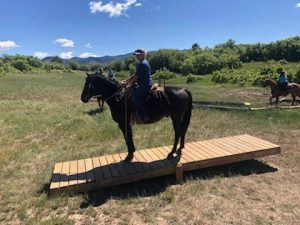 Catrina and Black Jack, on the tippy bridge! Photo by Brittany.

Black Jack got a little tense now and again, and at one point I suggested that Catrina relax her hands and let out a big breath, explaining that sometimes our horses will mimic us and do the same.  As soon as Catrina exhaled, Black Jack let a out a huge sigh!  I thanked him for his perfect timing!

There was water to cross and my horse Penny helped a couple of reluctant crossers.  They both went over on their own on Sunday! 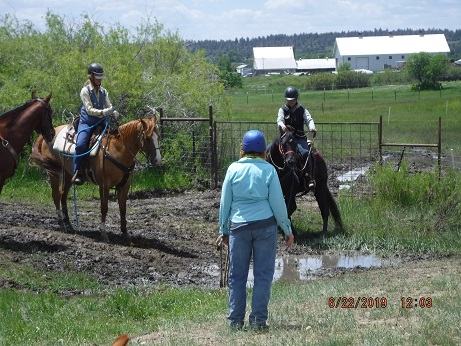 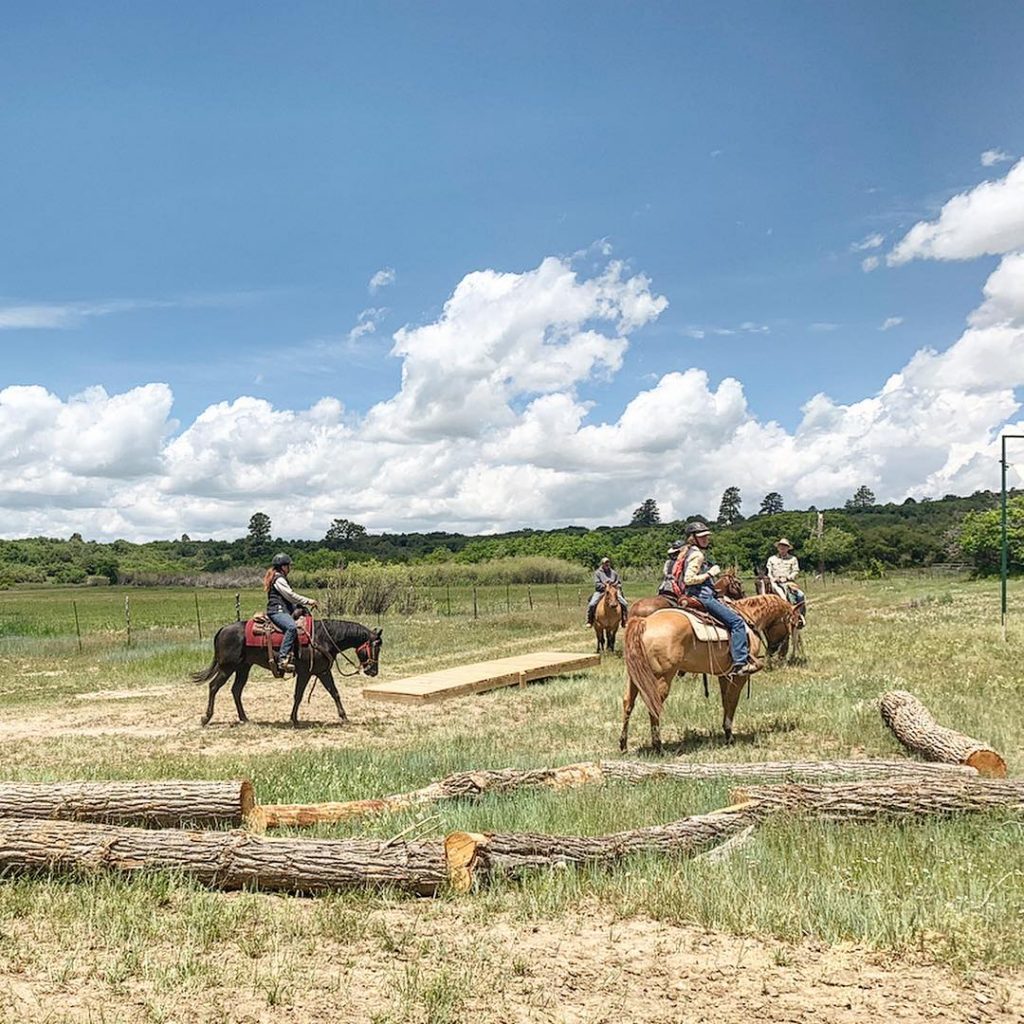 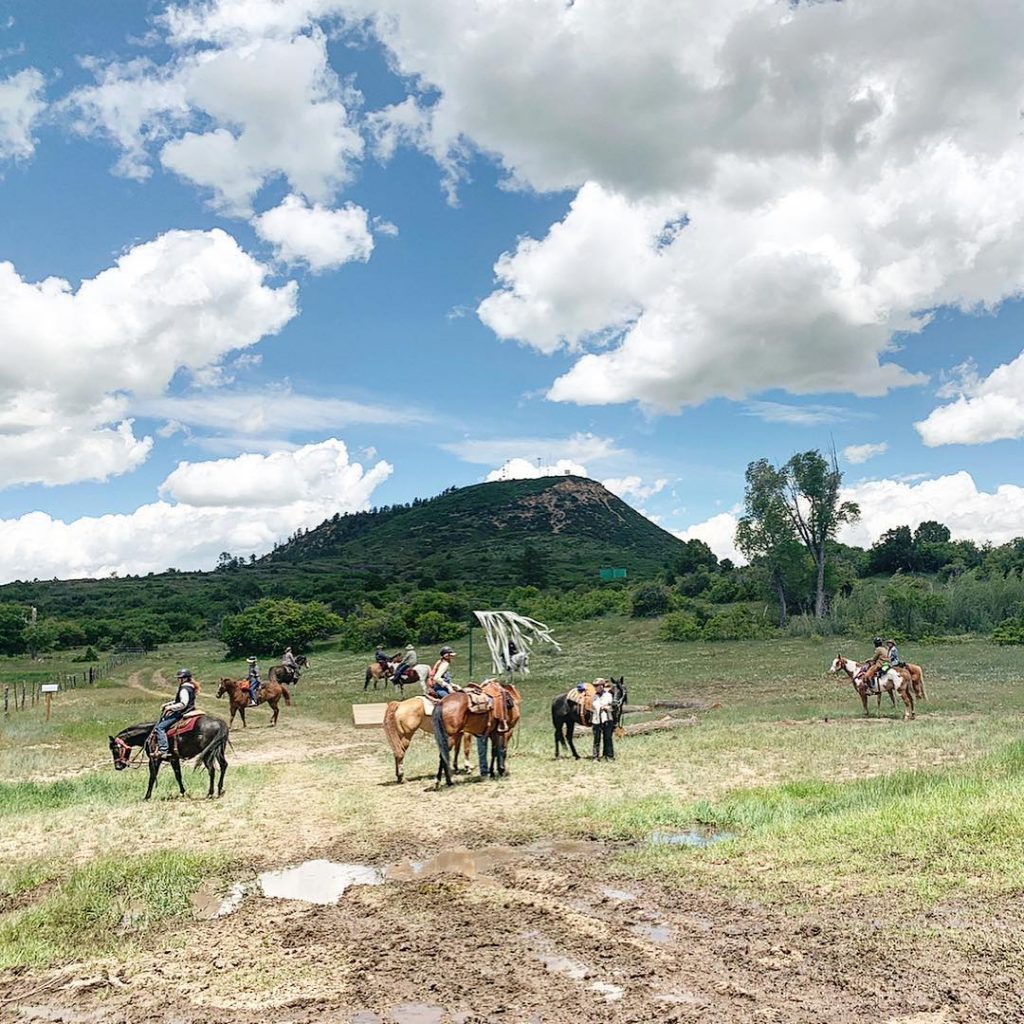 After the playground, we had lunch.  Penny really enjoyed her lunch time…eating her neighbor’s Texas Coastal hay and standing in her feed bucket. Penny has been known to be a bossy mare, but she took to Gina’s horse Kit instantly! (He was over at his trailer grazing for lunch.) 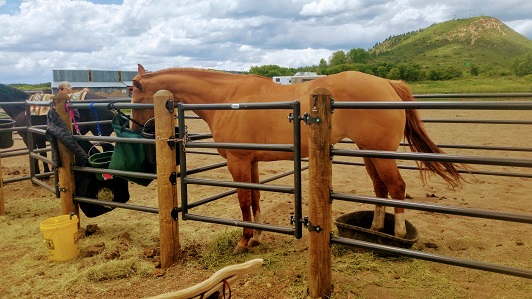 After lunch, we all headed out to tour Trout Stalker Ranch on horseback, but a cold front blew in, and I mean blew.  At one point we were all wondering if we needed Ruby Slippers because the wind was so strong! We decided to turn back so we would live to ride another day!

Sunday we did a bit more ground work, arena work, and playground stuff.

We practiced backing uphill! This turned out to be a good thing because Patty from Texas got hung up in a branch and her horse was stuck, so they just backed up a bit and were all set! 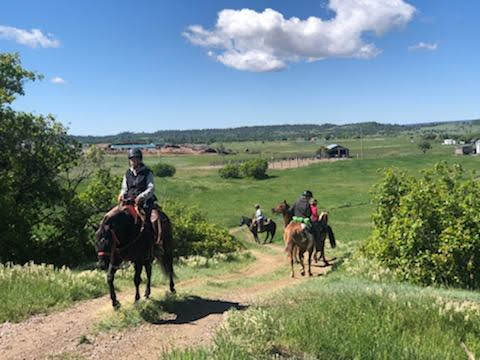 Natalie in the front. Marcia and Siri backing up hill! Photo by Brittany.

Then we went on a longer trail ride and had lunch in a beautiful meadow on the Sargent Wildlife Area! (We had our habitat access permits, in case anyone was wondering!) 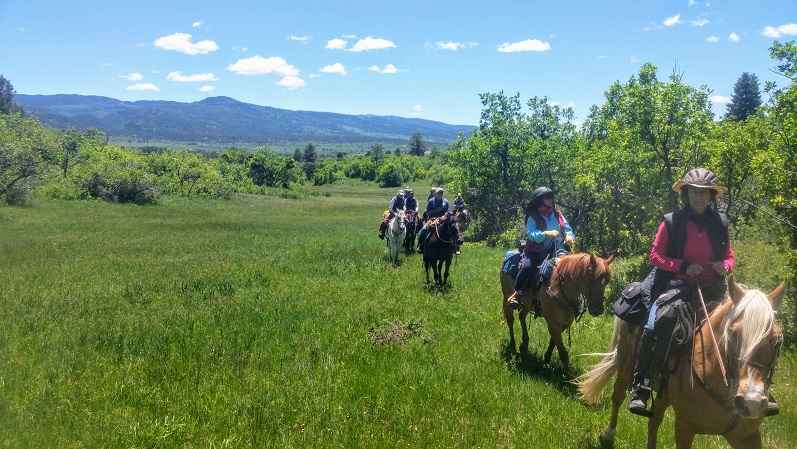 On the way to lunch. Foreground: Siri, Lily, Conlon. Sunday was so pretty (especially compared to Saturday afternoon) and the views were something! 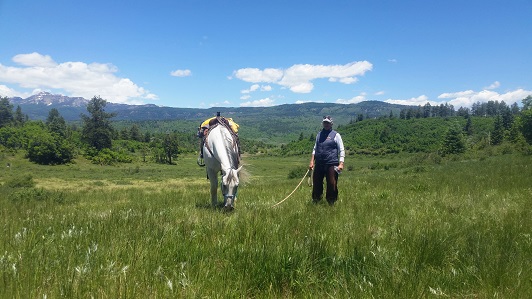 Our lunch spot. Janet and Rowdy in a shot worthy of a calendar! 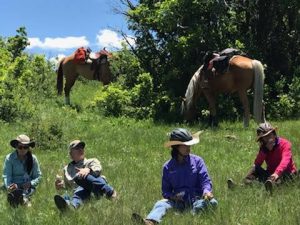 Patty and Jim from Texas (not me and my Jim), Gina and Siri at lunch. Photo by Natalie.

Thank-you to such a great group of horses and riders!

Here’s to next year!

2 Responses to “My Practical Trail Clinic”