Last Friday I hauled Stella, Lucy and Atti to the NM State Fair Grounds.  Atti and Lucy came to get ready for the NM Appaloosa Association, 50th Anniversary Road Runner show and Stella came for experience.

For the introductory rides, I kept two at the trailer and rode the third.  This arrangement seemed to suit them.  All three rode around indoors and outdoors, quite well!

And then we went to the stalls…

Got everyone returned to calm. Put Stella up and went to put Lucy in her stall.

She said, “nope. nope. and double nope.  not going into the black hole horse brain sucking out place. not.”

I backed her in.  Ha.  Sometimes people are smarter than horses!

Next up.  Bathing.  Atti really enjoys being bathed, but Lucy has been worried about it.  Stella wasn’t showing, so she just came to the washing area so she wouldn’t feel abandoned back at  the stalls.

Lucy took some convincing to come into the wash area, but at least she came in forwards. Still, she was not happy!

She went sort of catatonic, and stood almost perfectly still for the 20 minutes it took to wash her, looking just like this: 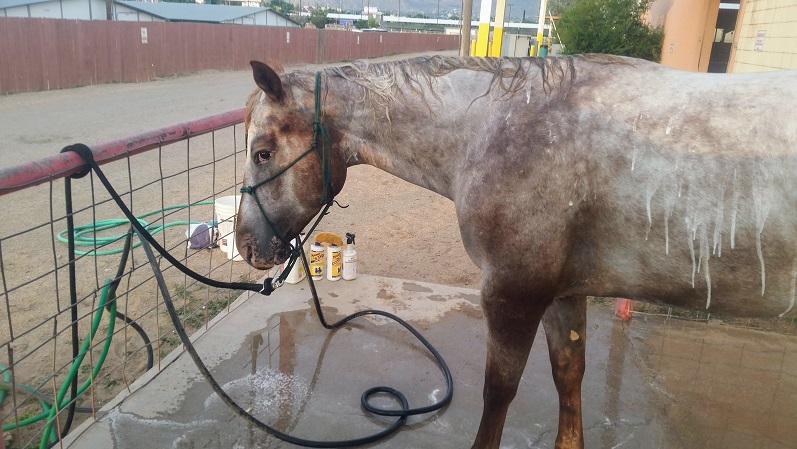 if i just pretend i am out in a nice green pasture, this will all go away… 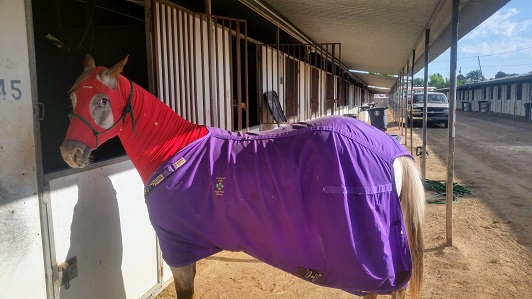 Still skeptical but regained some perkiness!

So, we tucked them into bed with sheets and slinkies to keep them clean (Lucy had to be backed in, again) and took Stella home.  Apparently, Atti was distraught over this development, and Scott, who was staying on the grounds overnight,  sat outside her stall, which Atti really appreciated. So did I.

The next day was the show and we entered Discipline Rail, a class that is essentially Simon Says.  Atti won!  And then, we entered Egg and Spoon, where we edged out Christy.  Her egg fell off just a tick before mine did!  Those two classes earned Atti $100!  Then she won Green Trail under both judges and Lucy took second! Atti split Jr Trail with Ashley’s nice gelding and took 2nd and 3rd (of 3) in Ranch Trail–largely on the lack of rope handling skills by me, and our if-you-stand-on-your-reins-is-it-ground-tying? exhibition. 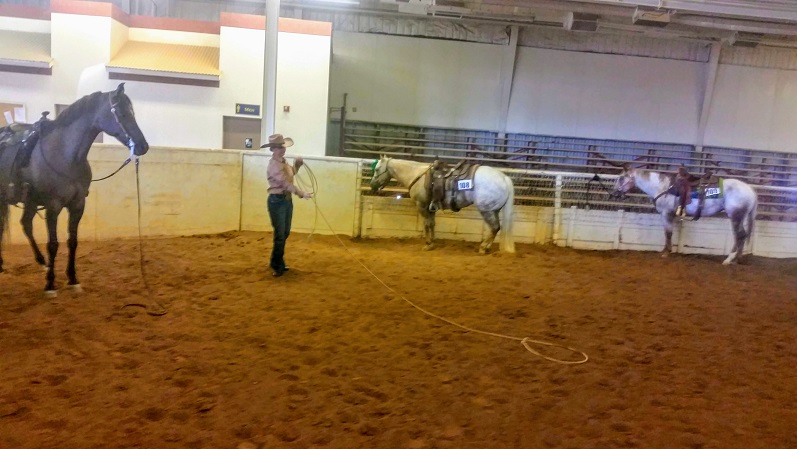 Christy sharpening her rope skills while her horse, Lamont looks on. Atti and Lucy are tied to the rail.

Lucy had a little ground tying learning moment as she tried to sneak forward just as I started twirling the rope.  I accidentally whacked her in the head!  (I said I was sorry!) She stepped back to her spot and stood still.  This earned her a second place under one judge!

At the end of the day, I got them rinsed off and turned in for the night.  I left off their sheets because it was so hot.

Lucy spent the night trying to perfect her look for the Green classes, which to her surprise, are for beginner horses, not those covered in green manure.  I had to re-bathe her in the morning, which was a little rushed because we decided to enter Atti in halter at the last minute. Tristanna lent me a suitable halter!  Thank-you!

I was a little stressed, but it paid off as Atti won her class and got reserve grand champion mare for the show! (Good thing we practice “standing square” for halter almost every time I unsaddle. I will just have to add ground tying in there somewhere!)

Thank you Bill S. for the picture!

I was very pleased with her Ranch Riding–she got 2nd by a hair to Tristanna.  I really liked her fast lope to the trot transition.  I want to get a solid flying lead change on her instead of a simple and improve her spins. Lucy helped Judith film.

Lucy also did Ranch Riding and you can see the potential she has but also the “greener” performance (along with her lead change in the front but not the back–“dragged a lead”). Thanks Judith for shooting the video!

Lucy came back and won Jr. Ranch Reining with two decent lead changes and a little sliding stop (we are just getting there–not in a rush.)

Lucy also got shown by Kathryn Erickson in Ranch Rail (since I had to ride Atti and everyone goes in at once) and behaved just as well as she would have for me, which I want to say is all because Lucy is so cool, but in truth Kathryn rode her just right. (Thanks, Kathryn!)

All in all, we got National points for both horses, and all three got good experience!

Plus, we had a fun group of people to show with, which always makes it better!

Our next show is in July and we are going “down the fence” with Atti and Lucy in working cow horse!

One Response to “The Road Runner 50th Anniversary Show”