The Pecos Chapter of the Back Country Horsemen was tasked with rebuilding the bridges at Stewart Lake and No Name (a little lake).

Our president, Mary Ann, and myself, took on the job of chief worry warts! We had to pack 24 lumber pieces that were 3″ x 8″ x 6′.  Each animal would be loaded with 150 to 200 pounds on a 7 mile mountain trail, finishing at over 10,000 feet, with the usual mountain trail hazards, plus possible snow.  We thought there was a lot to worry about.  I mean, someone has to do it!

We scheduled a packing practice early in May.  But it got rained out.

We had six solid pack animals selected (LT was NOT on the list!). One dropped out.

So, to be as prepared as possible, here is what we did.

Our lead packers, Richard and Peter, watched this video in which they are packing loads nearly identical to ours.  Peter and Richard learned a really nifty hitch.

Second, Mary Ann led four of us on a recon mission on Friday to assess the snow and make sure the trail was clear of logs. 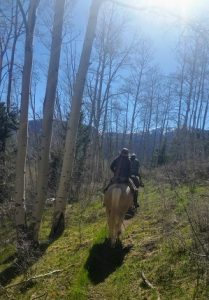 Siri on Tabooli (bred by Peter, trained by me, now owned by Siri–all in the BCH fam!) Patty and Bill S., Siri, Me and Mary Ann were the recon crew.

We pulled a good number of small logs off the trail and cut a few more, and wa la, the trail was clear.  (Another Pecos trail crew, the Erhman’s, had made an earlier sweep.)

We did find some snow drifts, too big to haul lumber over, about seven miles in.  That dictated our drop spot! 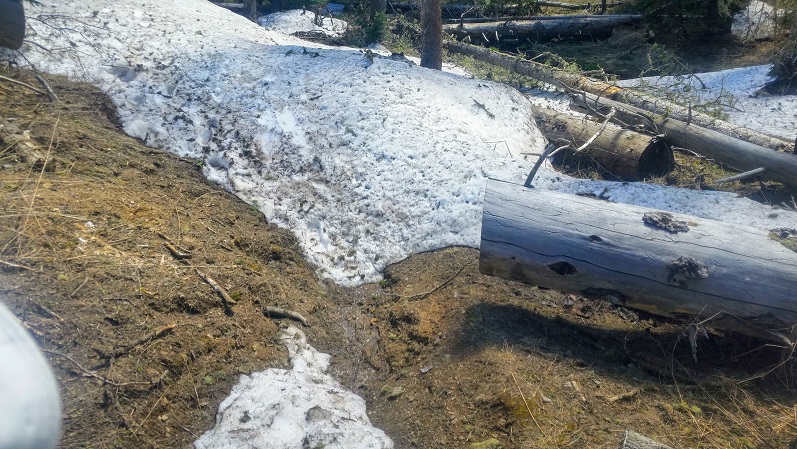 The snow is over 5 feet deep here and soft. No point trying to get lumber-loaded equines past that until it melts!

Next, we decided to practice on Saturday and depending, either pack in a load or practice some more and haul it all on Sunday.  But first, we had to weigh the boards so we could make balanced loads. 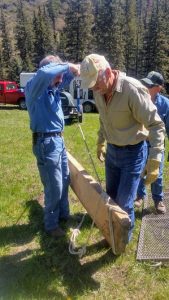 After weighing each board, we marked the poundage and arranged them in numerical order. These were rough cut, so they were not all that uniform in size. Our lightest was 35 pounds and the heaviest was 58.5. 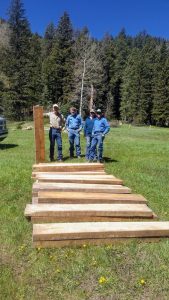 Weighed and arranged by weight.

Then we made six packing loads of four boards each.  In the video, they duct taped the boards, but we wired them through holes Peter had drilled to facilitate the bridge construction.

Then we loaded up Peter’s crew. He had two riding and two pack animals, that are pretty bonded.  We supplied Cometa for Jim, who was to be the outrider. 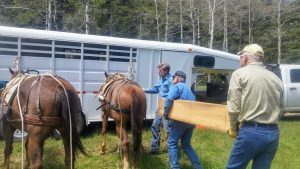 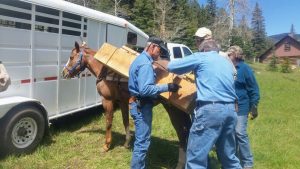 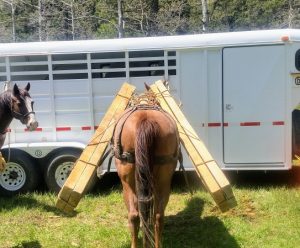 Once we were loaded, the board haulers had no troubles standing there, so we went for a practice tour. You can see this in the video. Peter is on Alameda leading Longshot, I am on Squirt leading Cinco and Jim is on Cometa.  The video is fairly long, but just watching a bit will give you the basic idea. Video by Richard Kingsbury.

It went well, so we headed out!

We had to readjust our load right off the bat as the right side load got too low.  Given that the trail wasn’t a big wide road or flat meadow, the uphill side wanted to drag. We improved things but we still had some draggage. This did not bother the horses at all, which I found interesting (and pleasing!)

Peter and Me. Photo by Jim.

The cool thing about this hitch is the load floats, so the dragging end bumped easily over things it hit. Also, once set, the knots do not slip. The loaded animals has zero trouble with what seemed like would be a very awkward load. (I had worried about that ahead of time, you know.)

At the end of the haul, we discovered that on the top left (only) the rope had nearly worn through on both our packed animals.  We were not checking for that, so got lucky that we made the drop point before the rope dropped the load for us.

The next day, we loaded the same team of horses plus Jim on Penny instead of Cometa as the outrider, and we loaded the Kingbury’s team of mules. We made some adjustments to decrease the rope wearing and made sure the loads rode a little higher. 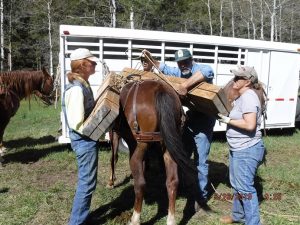 Me, Peter and Patty S., loading Longshot. Photo by Siri. 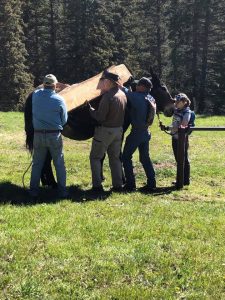 It was a team effort! Bill, Keith and Richard.  Abby is holding the mule. Photo by Patty S. 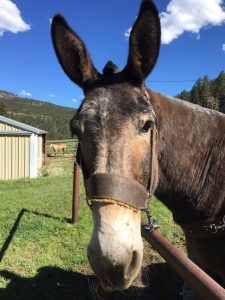 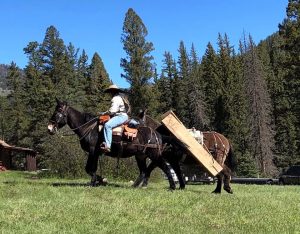 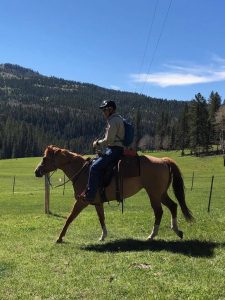 Our Sunday plan was to hit the trail and march the seven miles to the drop spot, but, of course, that did not work out.  We had to make some unschedule stops. Alameda needed some bute as she was sore from Saturday, three loads shifted a bit (all to the right) but not at the same time, and one rope had wear issues.

It was great having two teams.  When one team had to stop, the other team kept on, and since each team was made largely of one herd, the animals in each team were unified and didn’t worry about the other team.

Here we all are, on the trail.  Video by Richard Kingsbury.

(The bridge itself should be done the weekend of July 5th.)

2 Responses to “Board Walk”