My mom always wanted me to play tennis. She said it would be a good social activity as I aged. (Plus, she loved it!)

Last Friday, I had the privilege to ride with three other Back Country Horsewomen on our foray to Spruce Spring in the Manzano Mountains. Our combined ages add up to something around 235.  Turns out horseback riding and wielding a two-man saw in the Wilderness is a viable social activity for the “older” broad. He! 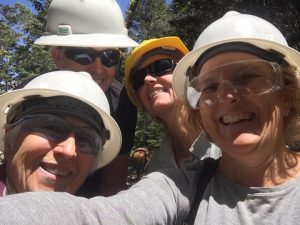 Last year, Mary Ann E. and I did a ride to this spring and found the spring box so lacking in water as to be non-functional.  This year, rumor had it, water was geysering out. That sounded like it would make a fine blog.

Spoiler alert:  We did not make it to the spring!

Token horse picture. I took LT, alone, which she doesn’t love to do, being a social butterfly.   I gave her some Aloe Gut before we left, just for the heck of it, and I thought she travelled better than usual, and when we got there, she seemed really content.  Not that you can tell by the picture! 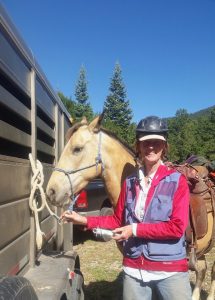 Me, LT and the empty tube of Aloe Gut.  Patty S. took 12 pictures and LT looks like this in all of them, so I went for one where I looked decent! Photo by Patty S.

Back to the story.

Before we even left the parking lot, a camper came hurrying in because a big bear had been circling his camp in a threatening manner.  He had lived in a Alaska and was worried this was a grizzly, but we assured him that we only have black bears here, and that they come in colors other than black. His camp was up on Spruce Spring trail.

Oh well.  We headed out anyway and did not see said bear.  On the way back, we saw the bear trap the Forest Service had set up, though.

There were lots of small and medium sized trees down, but we were making good time until we got to this. 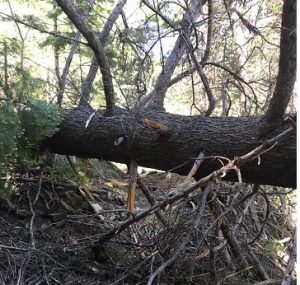 First we limbed it (which took a while as it had a lot of branches), and Patty S. debarked it. 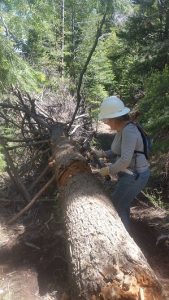 Then we did our first cut. 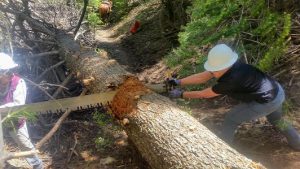 Mary Ann and Victoria, making the old saw sing! (Saws do have a  singing sound if you get the sawing rhythm right!)

We finished from the uphill side so no one would get squished if the log rolled.  I got the “glory cut”–the final cut! 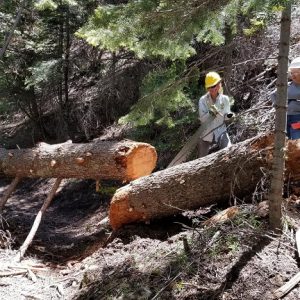 On to the second cut. 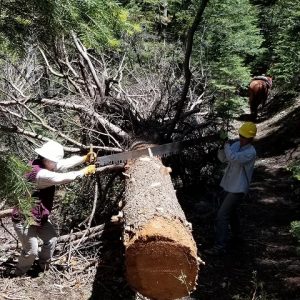 Photo by Victoria. Mary Ann and me.

This was a little trickier because the log was fairly high off the ground , but steady did it. 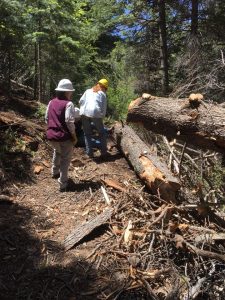 That took us a couple hours.  We took a lunch break, and then we continued on.

There were a lot of small “draggers” (trees or branches that one can drag off the trail ) and a few that needed to be cut.  We cleared two that were half on the trail at just the right height to snag a pannier that were left over from last season.  We stepped over five hoping to make the spring, but at 3:30 pm we hit a three tree wreck that turned us back.  We debated about walking past it just to get to the Spring but decided we’d clear those five we’d left as we made our way back.

We got four of them!

It was a good day’s fun. And social!

BCH also worked Albuquerque Trail in the Manzanos on Sunday (Jim went but I did not) and we are off to the Pecos for Memorial Day Weekend where we hope to work on Dockweiler Trail and haul boards for a bridge rebuild at Stewart Lake! 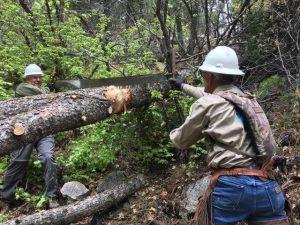 One Response to “BCH Broads”