There are many opinions as to when one should begin under saddle training in horses.  Some futurity and race horses are started at 18 months. On the other end, there are advocates for waiting until four or five years old.

I generally saddle my own in the fall of their two year old year, at about two and a half.

I have started a few “older” horses, the oldest being a nine-year old Fjord, Mojo.  He ended up belonging to Roger and Mary Ann and staying at my house.  Loved that boy. 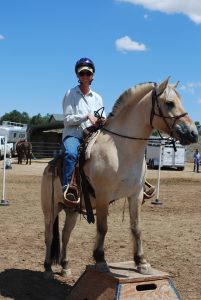 Right now, I have Ms. Stella, who belongs to Kimberly Clark.  She is seven and might have had 30 days of training when she was three, or maybe not. We are not quite sure.

Sometimes older horses have baggage which explains why they are older and not started.  Those can be tricky.  Often though, they are just horses that got missed for one reason or another. Stella is one of the latter.

I haven’t started the older horses any differently than the younger horses.  Every horse has his or her individual strengths (and weaknesses).  It is the job of the trainer to build on the strengths and improve the weak areas.  That is one of the joys of training! (When you get it right!)

Thirty day wonders are not my thing.  I really like to try to build a nice horse with really good basics that can perform in an arena and out on the trail. I can usually get a solid start on one in about three months, which for me is about 60 rides, but that’s what it is–a start.  A “finished” all around horse that can show and do ranch or mountain work will take me three to five years. (And even finished horses have to be maintained.)

Stella has been here about 19 days and I have 12 rides on her. Whoo! well on her way to the five year mark!  LOL.  She will be here up to 90 days. I did a few days of tying and ground work to assess her personality. 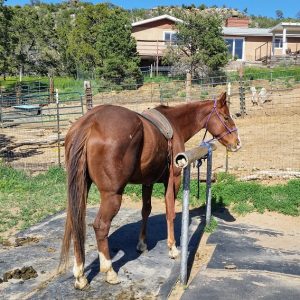 Stella says, “wait! i thought i was a pasture ornament! what’s with this tying stuff on me stuff?!”

I saw that when she free lunged, she was quite forward at the trot and sprinted at the lope, but she didn’t buck, rear or sull up. Yay! I like to see NO airs above ground. It makes the first rides way less dramatic.

She is bit tense though, so the primary challenge is to help her relax into new tasks while moving her training forward.

Her biggest defensive move is to stiffen her neck into a flexless board.  This makes steering and pretty much everything else rather difficult!

We are spending a lot of time asking her to soften her neck so she can follow her nose in a nice circle or bend her neck and move her hindquarters.  Both will really help with steering and using herself more fluidly.

So far, at 12 rides in, she is moving nicely forward at the walk, starting to find a sweet jog, and loping on both leads, but without a lot of cadence (because she has only three days worth of loping under her girth!).

She did well in the round pen under saddle on day 7, so on day 8 I wanted to try some other locations.  That day, it kept trying to rain, so we rode from shelter to shelter (30 feet), and up and down by the tie rails while a drop or two fell on us. 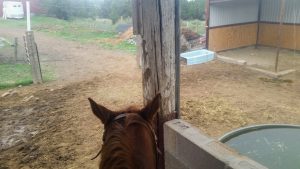 Rainy ride 8. I took pictures from the saddle. We went back and forth from this shelter to the one with the blue bathtub and we rode out toward the trailer and into the arena.  It was fun to help her navigate the railroad ties, some mud and even the bit of rain. 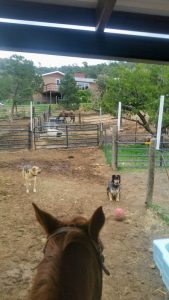 The dogs are such good helpers. Stella was not sure  this was the greatest thing ever, but she was willing to go ahead and give it try.

On ride 10 we did a trail ride in which she went forward, did not spook, but would have preferred to do the whole thing at a long trot rather than the sedate amble I had in mind.

And for more adventure, we hauled to Ed Krausses twice.  Stella  watched Lucy work cows both times and on trip number two we had ride 11 in Ed’s arena. 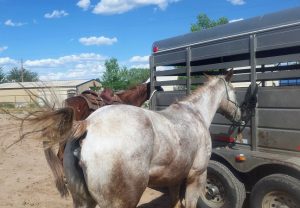 Lucy had just finished being dramatic about the wash rack at Ed’s and was taking it out on Stella by flicking her tail. 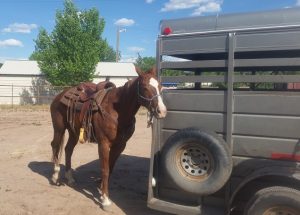 “i was just standing there! I had nothing to do with that hose! geez!

She is a nice moving, pretty and friendly mare with a lovely eye.  Once we get enough wet saddle blankets, we ought to have a horse! 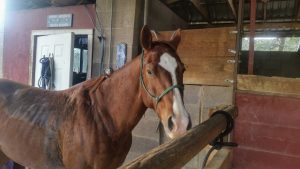 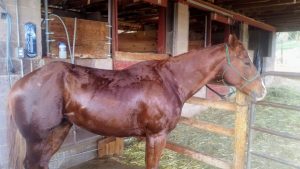 Stella got hosed off, at my house. She handled it much better than Lucy! Kinda funny because under saddle, Lucy is the laid back one.

3 Responses to “Starting an Older Horse”