In Which the Red Horse Would Liked to be Touched. No, nevermind.  Yes, touch. No, changed my mind…
Including the Twisty Lips Power Song
by Doranna 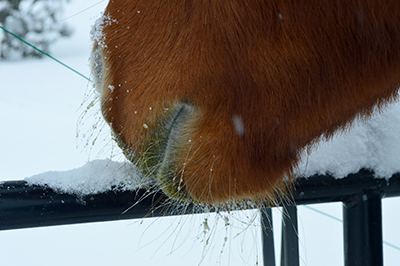 Sensitive red muzzle with ALL the whiskers!

Takota is a horse of phases.

Not surprising–he’s in a new situation, being asked to think in ways he hasn’t done before, and being asked to respect manners and boundaries that he shows no signs of previously encountering and no signs of accepting gracefully.

(As these are safety manners between horse and human, they’re not negotiable.)

Most of his “Ohhh, no, we’re not doing THIS!” habits revolved around food: he mugged the human for any bucket–shoving, reaching, lip-biting*, and then pushing  the human aside to get into the stall food plus flinging himself around inside the stall in a high dither if he rushed in before the human got out.

(*Lip-biting: “I’m not using teeth so it doesn’t count that I’m roughing you up with my superhero lip strength!”)

Since arrival, he’s learned that he can’t do any of those things.  He’s had to back up before he gets treats, he’s not allowed to approach the stall door while I’m setting out food, and he’s learned to look away and drop his head in order to get a treat.  He’s learned to let the treats come to him.

None of this came overnight, and none of it maintains itself–it’s a constant reminder for him, and he goes through phases of pretending he’s never been taught such things before WHY I NEVER–!

One result of all the learned manners is that he now isn’t sure how to interact with the human.  All his previous interactions were of the pushy, shoving, gimme gimme gimme variety.  They were about the food, not the human.

He went through a phase of hanging at the back of the paddock until called or fetched, but he’s mainly over that.  If I’m outside the paddock (doing chores, training the dogs), he follows the fenceline around to be at the closest point.  He even follows my car for the short distance the paddock parallels our little hey-it’s-paved-now! road.  And now he comes readily to greet a human in the paddock knowing there’s a boundary between him and any food.

And then once he reaches the human, he’s at a loss.  He reaches out to nudge, then retreats.  He offers himself for a scritch, then isn’t sure.  Haltered, he has no issue with any of it.  At liberty…he’s just never developed this part of himself.  He doesn’t know what he wants.

But he does always start with twitchy lips.

Once upon a time(TM), I was riding a Fjord who was a very nice boy indeed, but who could NOT keep his mouth to himself.  I mean, it was constant.  And he used TEETH. I’d never seen anything like it, so it weighed upon my mind, and I decided that if he had a need for oral contact, I would give it to him.  I would greet him with chin, mouth, and lip rubs.  Every time he reached for me with teeth, I’d return the gesture with rubbing and pulling.

And it worked.  I mean, he was never a model citizen, but his nipping attempts decreased significantly.

So I thought…Takota wants contact, but doesn’t know how to make it.  What if I take the twisty lips as an invitation, and give him mouth and muzzle rubs?  In his case, quite gently–he’s easy to overwhelm.

He’s still easy to overwhelm, and it’s really just a beginning.  I’m doing it in halter, to establish the language, but also at liberty as possible, and…  Well, I guess I’ll see!

In the meantime, discussing the mighty power of those twisty lips after food inspired one of my Facebook readers to burst into song, via the Power Rangers theme song. I think the heavy metal aspect really suits him.  Enjoy, courtesy of Betsy Copeland!

2 Responses to “The Red Horse Diaries: The Takota Nose”