I am excited to announce that I will be giving a clinic called Practical Trail June 22 and 23 at the Trout Stalker Ranch in Chama, NM!  We will work on horsemanship skills, play in the horse playground, and apply that to actual trails!   Here is the link if you want to register.  Only $300 for the all inclusive weekend!

Slots are limited.  We have a cap of 12 riders and it is filling up fast!

Penny was the mentor horse.  She was a polite and confidence boosting mentor, and did not bring out her Boss Mare persona!

I got to be the leader for our 18 rider, 20 equine and one hiker Back Country Horsemen training ride starting at the Golden Open Space and continuing to a stretch of live water in the San Pedro Creek Canyon on BLM land.

Running water in NM is a bit of a scarce commodity, so even though this is a small bit, it is still exciting. We had four horses  that wanted some practice (well their riders wanted them to have practice), so we sent most of the group on to see a small pond and kept the four, along with me on Penny and Jim on Cometa, at the practice spot.

This water was shallow, there was no step down into it, and it was not especially muddy, so it was an ideal spot for Water Crossing 101.

Two of our four declined to cross. “not right now,” they said.  “our hooves might get muddy.” 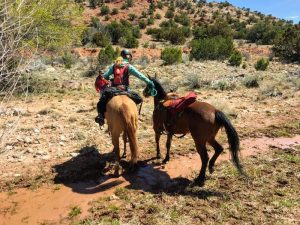 This ponied horse is Regina. We wanted to go slow enough so that she stepped in and did not jump. It worked! 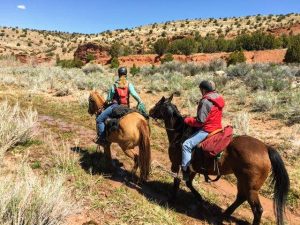 Pat and Regina, done with over and back and on to up and down the creek. 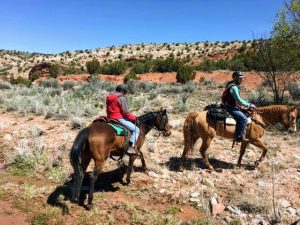 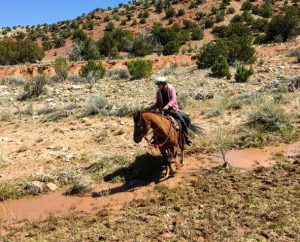 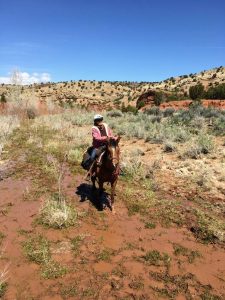 Cap says: “water! i love water!…now that you got me in.” He loved it so much he started to think about laying right down in it and having a bath!

This was introductory water crossing, so it is to be expected that when these horses first encounter a more difficult water crossing (difficult being all relative–our Pecos Wilderness water crossings are not deep or lengthy), they may need support.

Both were so willing and level-headed, however, that closely following a mentor horse is likely to do the trick, and if not, they could very easily be ponied again.

With just a little more water under their hooves, these two horse and rider teams will be NM water-broke!

I was able to read the 1972 article ” DRUGS, PERFORMANCE AND RESPONSES TO EXERCISE IN THE RACEHORSE 2. Observations on Amphetamine, Promazine and Thiamine G. A. STEWART, M.V.Sc. Three horses were used in the trials. Injection of 0.5mg/kg 3 of thiamine 30-60 minutes before galloping resulted in calmer horses on the way to the track in 3 of 7 gallops. It was not clear if the response was seen in one animal three times or in all three animals, once each. There was no effect of thiamine on heart rate, respiration or speed, whereas promazine slowed things down and amphetamines increased the rates.