In which the Red Horse Learns to Gear Down
by Doranna

Takota got his feet trimmed today, which was a pleasing occasion.  He arrived with ugly mismatched angles and quarter flares (in spite of one remedial trimming already behind him, but such fixes must be made gradually).  Now it’s 11 months later and his hooves have grown out healthy and strong; they’re holding their angles and showing no flare.  Very nice!

Takota Red Horse is an interesting enigma.  He really wants to be a good boy, but in so many ways, was never taught how.  Well, he was for sure taught that standing quietly for the farrier was a Good Boy Thing.  He demonstrated that quite ably today. 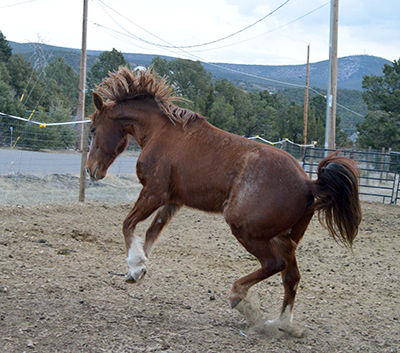 Nothing to do with standing nicely for the farrier–rather, in bucky-snorty alarm mode over forest fire smoke on the wind. But it’s a more fun pic than standing nicely.

But.  He wasn’t ever taught ground manners about crowding or feeding time respect, or if he was, someone thoroughly erased that learning along the way.

He also wasn’t taught diddly about the most basic work-in-hand, by which I mean the faintest good handling manners outside of patterned events like…well, farrier trims.  And because he wants to please, being asked to think about new things–things to which he didn’t already thoroughly know the answers–instantly made his brain hot.

Takota knew only Go.  The human mounts up, the horse goes.  Not in any kind of balanced fashion, but an anxious, tense slow-to-fast rack, flinging forward–avoiding work through his back, stressing his front.  Easy enough to sit, though, and beguiling in that way.

Because of the various layers we’ve had to unpeel (the saddle, his obvious concerns about the saddle fit, the bit, the onion down to his basic foundation), it took seven months before I could ask him to walk with any duration.  Then we had weather, illness, and human injury, so yesterday when we left the paddock for the first time in just over two months, walking was something of a rediscovery for him.

Takota Horse (rush-racking): I am walking.

Yeah, he talks in all-caps a lot.

Me: We’ll circle and change directions a lot, see if that helps.

TH: I can do that really well!

Me: Except for the part where you’re still gaiting.  Just listen.  Breathe.  Stretch.  Relax.

Me: Does my seat say you’re done?

TH: Three steps.  FOUR.  FI–OMG WHAT IS THAT I SEE A THING A SCARY THING AND IT’S COMING THIS WAY–oh.  That’s a person way down the road. I did good sideways though, didn’t I?

Me:  Yeah.  Awesome sideways.  Nice job with that.

TH: But I AM REALLY GOOD FOR MY FRIEND FARRIER.

Yes, Takota Horse.  You really are.

2 Responses to “The Red Horse Diaries: Learning to Walk”