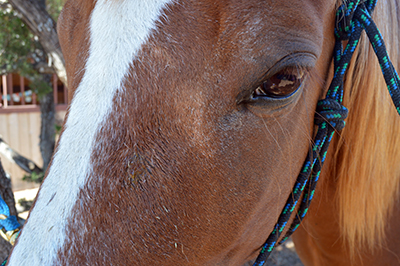 So, some of you are wondering why I’m not writing about the stupendous gray unto white Lipizzan who still graces my bio page (and always will).  Some of you already know.  Either way, that’s a story for another day.  Some things are still too hard.

In the meantime, the paddock now holds a little red Kentucky Mountain Horse named Takota.  His name was originally Lakota, which didn’t sit perfectly with me, but since Takota means “friend to all” in the Lakota language (as much as my ignorant white person self can research), things worked out pretty well.

Takota is a lovely boy a soft eye and a sweet soul–a bright red chestnut with sooty overtones and a some rabicano roaning and chrome.  His conformation is quintessentially gaited mountain horse, right down to the slight front turnout.  He’s got a hunter’s bump, heralding long term lumbosacral stress–likely poor saddle fit on a super-sensitive back.  That’ll never go away, but we can and already have built muscle for better support.  And he somehow made it to 15 years old as a remarkably uneducated horse, in spite of a history of trail riding.

Well, what he knew was “I go at the start of the ride, I rush along thoughtlessly, I stop at the end of the ride, and if you ask me to think then I’m gonna blow PS don’t touch the reins or I will jerk you.”

He also came dramatically undernourished and weedy and lacking foot care (although already the better for having been a couple months at a great interim barn), which manifested in hoof flares/hoof quality, unshed winter coat in June (not Cushings, no), crappy mane quality, no muscle (not just lack of exercise, no), and, weirdly, he didn’t smell right!  It didn’t take long to address most of that. His summer coat gleamed when it finally came, I trimmed the ugly patches out of his mane without creating too much of a disaster, and his feet are almost grown out and no longer flaring even at the end of the trimming cycle.

People have suggested tragic background stories for him.  I don’t find any interest in that, and I don’t for a moment think anyone abused him to create his anxieties; they simply didn’t teach him that he could think beyond any initial concerns, and so those concerns built.  In the end it doesn’t even matter what his first fifteen years were like; I don’t need to know.  It matters only how I address the horse in front of me.

I have to admit, getting from there to here (so far) has been something of a wild ride.  From the saddle hunt for a horse with shoulders back to there, strong but wide withers, a flat back and a short weight-bearing zone (still sorting that out) to the bit hunt, which sent me to bitting places I never thought I’d and is currently settled there, at least for now.  Horse’s choice, after all.

Initially we worked from the ground, which was a good option, especially as he absorbed his new nutrition and strengthened…and became more dramatic when asked to think.  “My brain is hot!” he said.  “I don’t know what to do with that, so I’ll PANIC!”

That was interesting.  Yeah.  That’s the word I’ll stick with.  Interesting.

Our progress hasn’t been as fast as I’d like, but there’s definitely been progress.  There were the six weeks between the time he outgrew my saddle and I found another–imperfect for me, but decent for him.  Then we spent a couple of months on the bitting, and literally the day after our first ride in his current bit, got hit with a severe winter (and no indoor facility), then a severe illness.  But there’s always something, and we’re poking away at things.  For a horse who started with no ground manners and no in-hand work and no awareness of what it meant to, you know…just walk, we’re doing okay.

But that might put my delight at today’s ride into perspective–a little noodle in the small paddock after the long weather-sick layoff, trying out a new saddle.  During which he stretched into the bit, rolled out some relaxa-snorts, demonstrated our baby step lateral work (shoulder-in and haunches-in positioning and other gymnastics), and only heaved a great sigh when I asked him to be more thoughtful.  Then he stood at the hitching tree while smugness rolled off him in great waves, a ridiculous and laughable exaggerated sense of self and accomplishment.

Takota Horse: What’s that?  RIDICULOUS AND SMUG?  The hell I was!

(Did I mention, he’s going through a phase?  He didn’t swear when he got here; he just flailed and looked big-eyed and flabbergasted a lot.  Now he swears like a teenager who’s discovered WORDS.)

2 Responses to “The Red Horse Diaries: Takota is Here”