The  term “pheromone” was “first coined by Karlson and M. Luscher in 1959. Early work was in insects, but scientists soon discovered that pheromones operate in other animals, including mammals.” The Pheromone Site at Texas Tech University.

For a more sciencey take,  Armando Piccinni et. al. (2018) say  “pheromones are volatile compounds released into the environment through body secretions and perceived by members of the same species, in which they trigger a behavioral or hormonal response, or modulate endocrine states and development.”

Equine Appeasing Pheromone (EAP) is, of course, produced by mares.  When foals nurse, they become calmer and feel safer.  This pheromone has been replicated and is marketed as Confidence EQ  as a calming agent.

(Bovine milk proteins are also being marketed as calming agents (Zylkene), but that is another topic.)

I have tried Confidence EQ, and I saw a difference in Atti.

But, my experience with one horse, is not a scientific study.  It is an anecdote.  I wanted to find out if there were good controlled studies documenting the effectiveness of EAP.

The Confidence EQ website provides a nice graph, but does not state the source of the graph. 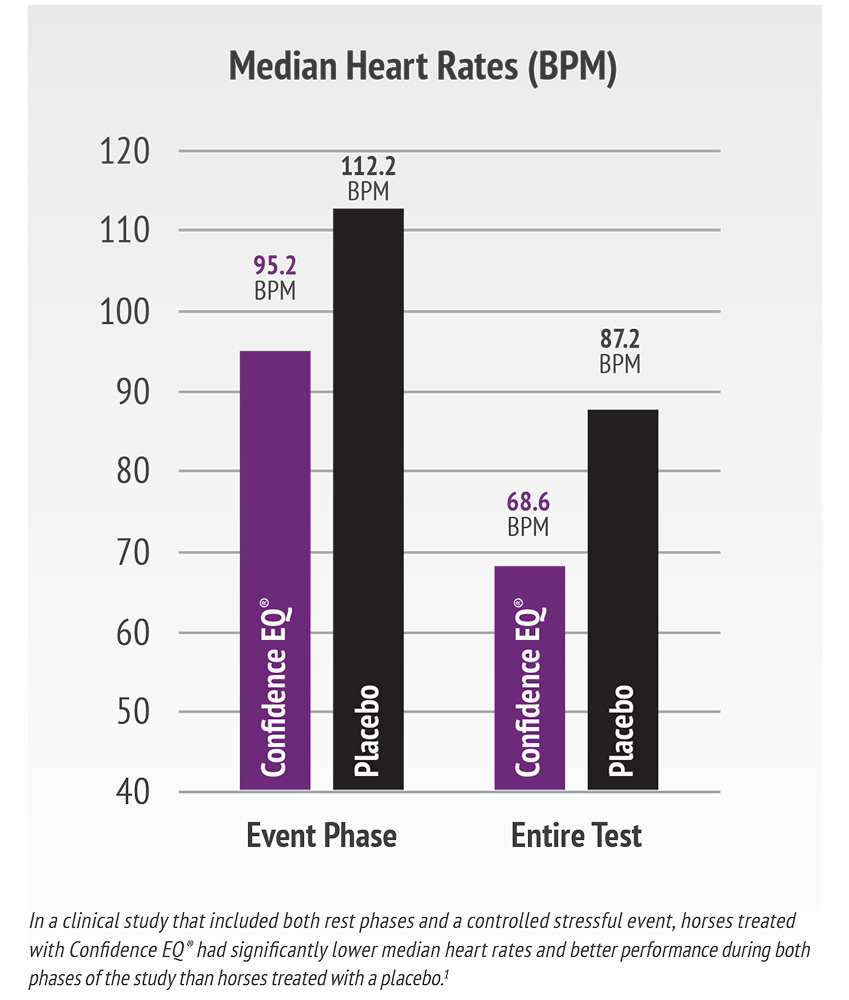 They do cite “Effect of a synthetic equine maternal pheromone during a controlled fear-eliciting situation. C. Falwee et al, Applied Animal Behaviour Science, 101 (2006)”, and this study does conclude that EAP could be useful as a calming agent.

However, another paper, published in 2008, “Effect of a synthetic equine maternal pheromone during a controlled fear-eliciting situation: A critique on Falewee (2006)”, finds some major flaws in the study design of the 2006 paper.

Sue McDonald (2016), in the The Horse, reviews research papers on EAP and cites several showing no effect of EAP.  She also notes there is a lack of study using the actual product Confidence EQ.

A 2012 research poster presented by Alejandro Cozzi at a conference on animal transport (who knew there were conferences on animal transport?!) suggested that EAP works to calm horses during travel (they collected data on heart rate and things like that associated with stress response in horses).  This study was the most convincing to me.

I also came across  a blog done by Jenni Autry (2105).  She ran “tests” on her own OTTB (off the track thoroughbred) mare and concluded that Confidence EQ helped the mare feel more confident out on rides, with the farrier, and alone in the barn. Her blog was fun to read and was anecdotal–no control, sample size of one.

Dr. Dralle at Albuquerque Equine has observed calming effects of Confidence EQ for horses that need a little bit of extra, well, confidence.  He felt that the science that does exist suggests there is something to this product. He did not think this product would work for horses that are going to lose it all together.

Interestingly, a 2018 paper in Clinical Case Reports concluded that Human Appeasing Pheromone works to calm children going to the doctor’s office and has a positive effect (in conjunction with more traditional pharmacological solutions) on some psychiatric issues such as OCD (obsessive compulsive disorder, not the horse joint disease osteochondritis dessicans, also known as OCD), separation anxiety, social anxiety, and self harm.

I wonder if the effect of EAP is stronger in foals than mature horses?  Do some horses stop making the receptors for EAP as they age?

Maybe I should quit all my day jobs and sign on as a pheromone research assistant somewhere.

I will, however, continue to stick the Confidence EQ gel up Atti’s nose before major changes in her schedule because I think it helps her relax. Since the chemical structure of all APs is similar, maybe I could stick some up my nose, too… 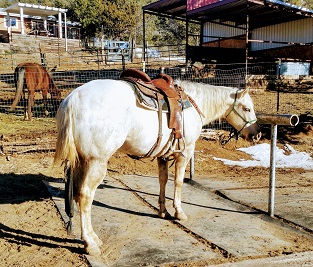 i am fine. i am confident. well ok, sometimes, not so much. i used to hate having my nose touched, and that gel felt weird, but I am good with it now.

Many products sold have wild claims made about them that are just that, claims. I was pleased to see that there is at least some peer reviewed research that supports effects of pheromones and Equine Appeasing Pheromone in particular.

So much information is available on the Internet and anyone can post anything. It can behoove us to do a little research and recognize fact from baseless claim.

One Response to “Equine Appeasing Pheromone as a Calming Agent”