It is getting late in the trail work season, but the forecast for last weekend was looking good, so we put together one last Pecos Chapter of the Back Country Horsemen trail project for the Manzanos.

We were scheduled to have seven riders but lameness (in a horse) and a dead battery took out four, leaving just Jim, Mary Ann and me.

It was a good thing we picked last weekend, because Monday, a storm came in and now there is snow! 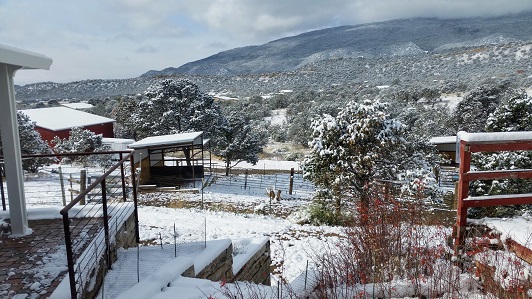 View from my house, at 6800 feet. The trails we clear in the Manzano Mountains, 50 miles south, go up to 9,000+ feet, so the snow is probably going to stay on the ground there rather than melting. There were already some small patches last weekend.

We cleared a big log a few weeks ago, and the trails were clear, but then we got reports that there were a lot of down branches on the Albuquerque Trail-Mosca-Crest-Cerro Blanco-4th of July loop. (This is a pretty cool map and it even shows the horse bypass on Cerro Blanco that BCH put in around 10 years ago. Or more.  Time flies.)

There must have been some sort of wind or maybe ice event, because there were not many whole trees.  Just tree parts. Lots of large branches and tree tops had been sheared off and were littering the trail.

And they were generally spaced just far enough apart that we’d get one set cleaned up, not see any more, get on, ride for a whole three minutes and then find more.

Last year we made a check-list for BCH and one item included was  “the ability to mount and dismount up to 20 times on a given project”.  Some members thought was excessive.  Ha.   I was pretty happy to have Atti because she is not a tall horse!

The oaks really got hit hard. 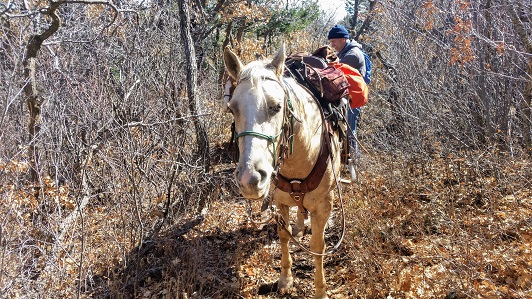 “u know,” says Atti, “we climbed and climbed up from the trucks, and i was getting pretty hot with my new winter coat, but since we hit the oaks, i am standing around a lot. Cometa tried to wander off a little but i am pretty happy standing here, altho i got a kinda bored when patty was shutting that wire gate and went to find a bite to eat.” 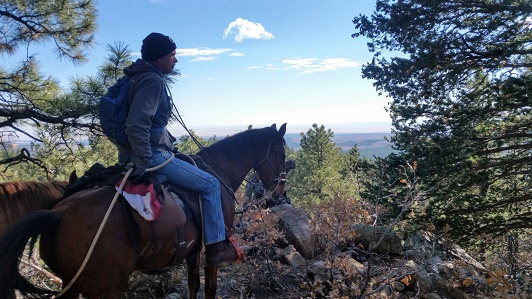 My phone probably has a landscape option that would have captured the view better, but oh well. Albuquerque Trail to Mosca to the Crest Trail does have an elevation gain of about 1500 feet, most of it in a fairly short stretch on Mosca.  Here is Jim on Cometa, ponying Penny, on Mosca. 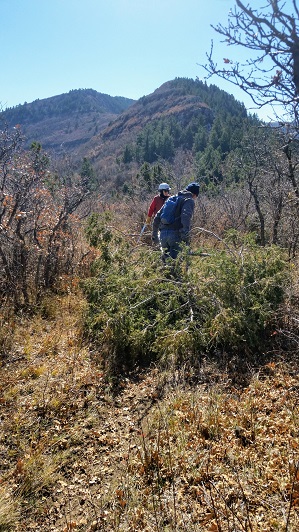 Crest Trail near the junction of Cerro Blanco–we thought we were in the clear because trail here is mainly bordered by brush, but NO, a juniper had cracked and we had to cut these branches off to clear the trail. They are not huge, but definitely big enough to block a path.

We had a nice lunch in a sunny little clearing just down from the Crest Trail toward the Cerro Blanco junction.  Atti thought it was great!  She snacked the entire time.  Everyone else (horse-wise) had a bite or two and took a nap.  We people ate our lunches and then we enjoyed the sun as well. 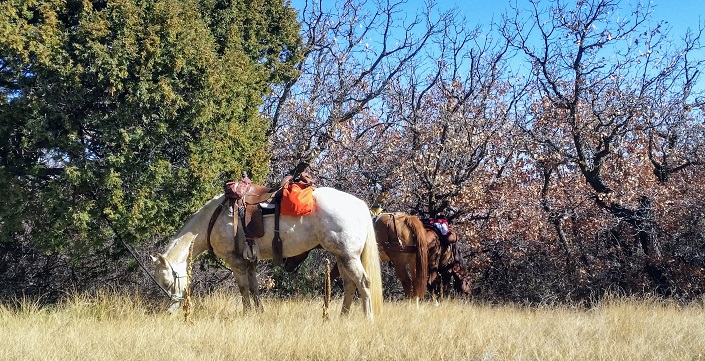 “this is great!” says Atti.

We saw three deer, 25 yards away, unperturbed and broadside (perfect for hunting, which of course, we were not).  And we saw some really big piles of bear dung.  I should have taken  pictures.  The volume may have been more than a quart in one of the excretory efforts.  There was a smaller pile under the juniper where Atti was tied in the above photo.  She sniffed it, but it did not make her hair stand on end.

The 30+ branches we cleared were all on the ride up to the Crest, for which we were grateful.  The ride down had been cleared by someone else, so we were able to enjoy the trail.

Atti even led and her walk was reasonably ground-covering!  That is useful for the back country, but also necessary for the class Ranch Riding that she will be showing in again next year.

I am really proud of Ms. Atti (and I do mean her and not me as her trainer–ok, I am a little proud of me).  But anyway, she has gone from “I CAN’T, I WON’T, I QUIT, I HATE YOU” door slamming teen-agerish temper tantrums to being a go-to horse around here.  She can handle tough backcountry trails, she can pony young horses (and she herself is only three) and packed horses, she can lead, go in the middle or the end of a group, and she is relaxed and unflinching with unexpected obstacles such as when Jim flipped (the leafy end) of a giant branch on her butt in the course of our trail clearing.

It took me a while to figure out that her acting out early on was largely due to fear and frustration (we ruled out pain and tooth issues).  I did not understand that because nothing we were doing was particularly taxing or complicated according to most horses I have.

Well.  Every horse is unique! Now I know that if she freezes up on me, she is not being a pain just for the sake of being a pain and I can modify my approach.

I was whining to a trainer I was taking lessons from one time about getting beat at a show.  He had no sympathy.  He looked me in the eye and said, “Get better.”

I never forgot that.

It applies to horse training and general riding, as well as showing.