Last Monday, we returned from our hunting trip in the Carson National Forest in the Cruces Basin Wilderness.  Indy and Cometa went on that.  It was Indy’s first hunting trip and because she had Cometa, our old and very level-headed Spanish Barb as her companion, she really did well.  I have considered selling her, since she is currently relegated to a walk-trot horse due to her bone chip, but, well, not yet.

The habitat consists of meadows, some big like in the picture below. and some small.  The trees are mostly aspen and spruce.  The aspen was turning and the gold leaves are so stunning! 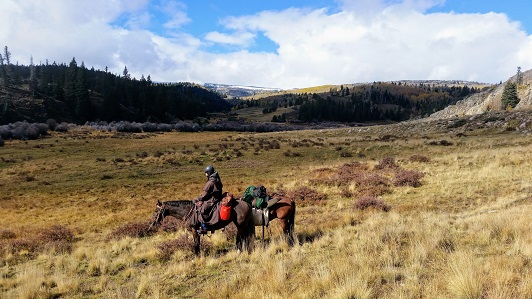 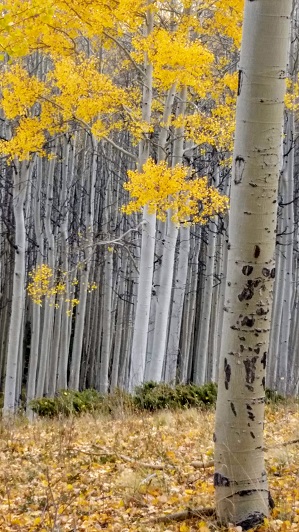 Last Friday, Mary Ann Ende and I went to the Santa Fe National Forest in the Pecos Wilderness to get trash, already bagged by other trail volunteers, from an abandoned camp near Stewart Lake.

The habitat is similar to the Cruces Basin, in that there is a lot of spruce and beautiful fall aspen.  There seem to be more deer and fewer elk, though. 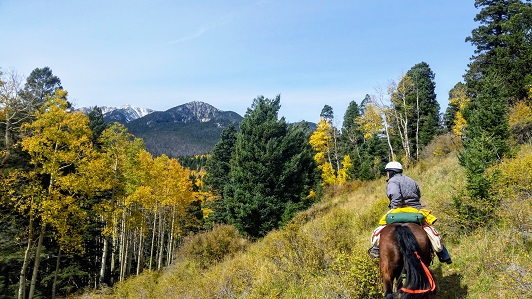 There is snow in the Pecos from that storm we were in on Monday up in the Cruces Basin! 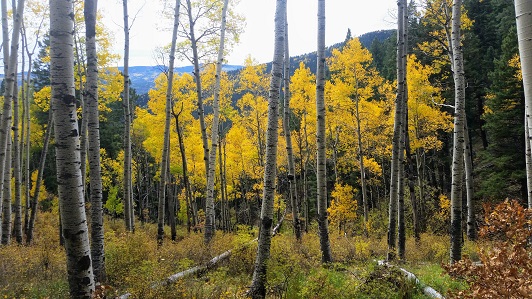 Aspens in the Pecos!

I took Atti and LT.  Atti, at three, has become a very useful working girl!  She was my lead horse and LT got to pack the trash. 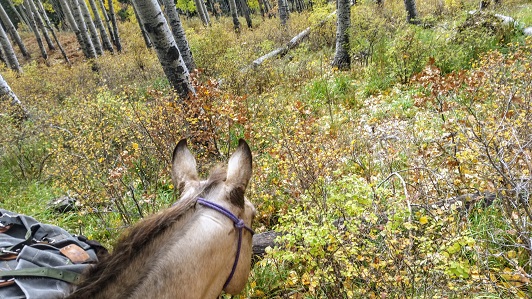 “i needed my picture in here”, says LT

Atti doesn’t like to walk very fast, so we had to trot a lot on the uphill trek to make decent time and keep up with Tulip’s good walk.  Also, she had never crossed water, but I was 100% confident that she could do that in short order.

She got over the mud spots easily.  She balked at a wooden bridge, which surprised me since she was posing on our wooden bridge just two weeks ago, so I got off and led her over that.  I also led her into the next two water crossings as she made it clear (by backing and getting really stiff-necked) that I was asking her to work above her pay grade.  Since I have gotten to understand her, I know that when she quits me, it is due to anxiety, not stubbornness, so the best thing I can do is help her understand.  Unfortunately, sometimes she quits before she has really given whatever it is a chance, but she is getting better month by month.

At any rate, she followed me into the water and got a drink and then I rode her around in it a little. 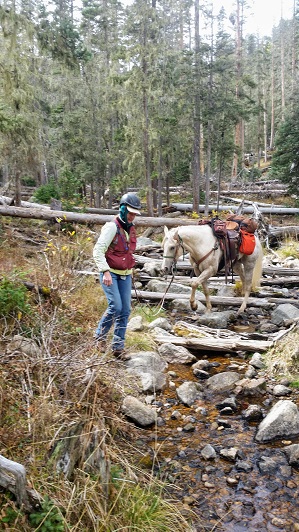 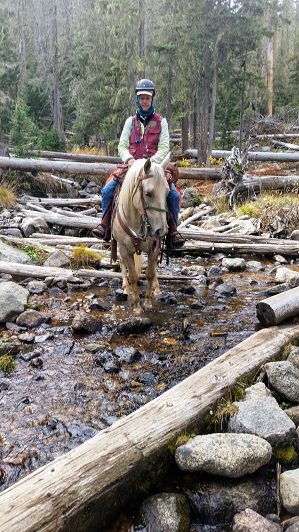 She walked into the last creek crossing with me on top, with only a 30 second hesitation.  She is not ready to be the lead horse across water, but it was a very good start!

LT packed the trash bags, and being LT, managed to run her load into a thing or two and scare herself. Whereupon, she would rush up on Atti, who to her everlasting credit, would just hold her space and decline to get rattled at all!  I was VERY proud of Atti.

In addition, at one spot there was a log blocking the trail.  Tulip declined, LT jumped it but Atti stepped over like a seasoned pro.  Very proud again!!

If I can just convince Atti to try no matter what, we could be killer in the show ring class Ranch Trail, but new stuff,  like the water crossings, can still make her brain turn off.

On the way down, Atti started to pick up a more swinging walk, and she kept it up even on the flatter part. It just took about 8 miles for her to figure that out (the ride was about 14 miles)

Back at the truck, we discovered the trash was only part trash.  The rest was a tent, three sleeping bags, a decent poncho, some camp dishes and some ukky wet clothes.  I wonder why people bring all that stuff in and then just walk away from it?

We each drove home, and then we woke up and met Mary Ann, Tulip and her Icelandic horse, Shorty, but this time in the Cibola National Forest, Manzano Wilderness.  Our plan for the day was to cut a big log off Albuquerque Trail.  I took Penny and ponied Lucy, Jim came along and rode Cometa, and Sandy Madsen on her horse, Cap,was there too, making us an awesome foursome of people and sixsome of horses.

The Manzanos are farther south and the habitat is quite different from the other two forests.  There are some amazing juniper trees, scrub oak, soaring poderosas, and maples.  In some areas there are aspens, but the maples were the star attraction on this ride. 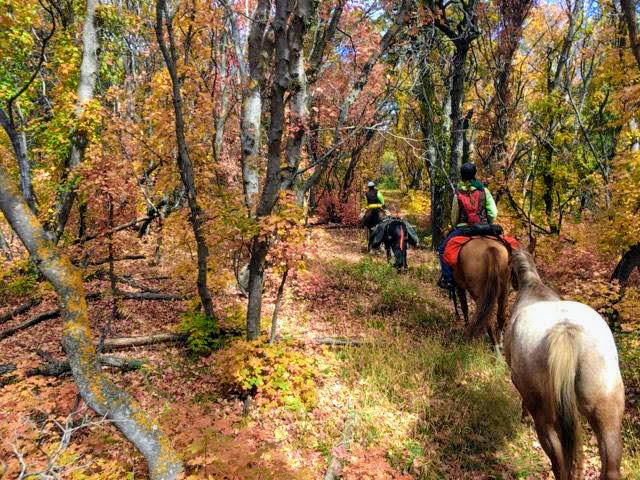 Mary Ann on Tulip ponying Shorty in the maples. Me on Penny ponying Lucy 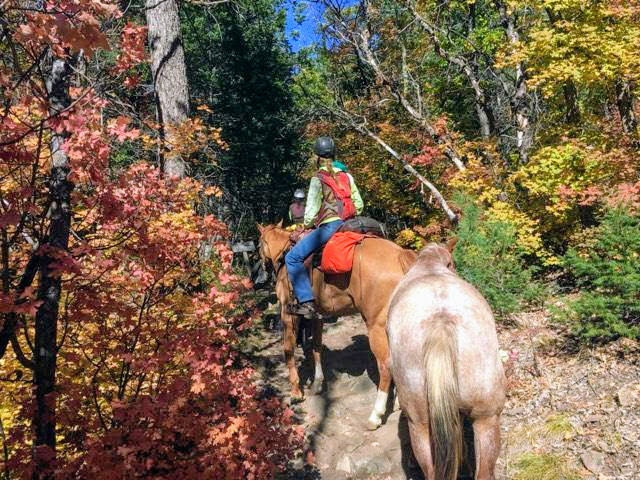 Me, Penny and Lucy, in the maples. 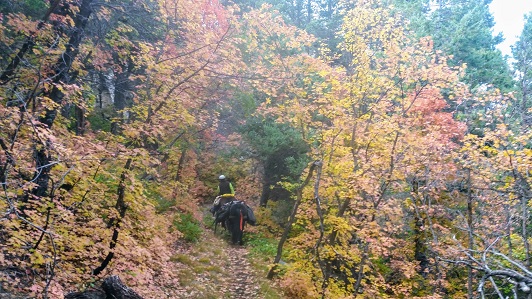 Mary Ann Tulip and Shorty–I got a smudge on my camera lens–in the maples!

We finally found the log, and we did the top cut, got clear through and the log did not budge.  We cut the second spot, got clear through and still the log did not budge.  Jim said he was going to give the wedges we had in there a little whack and I asked that he do it from the uphill side.  That was a good idea, because as soon as he tapped one wedge, the huge section of log we had cut, cut loose and rolled off the trail! 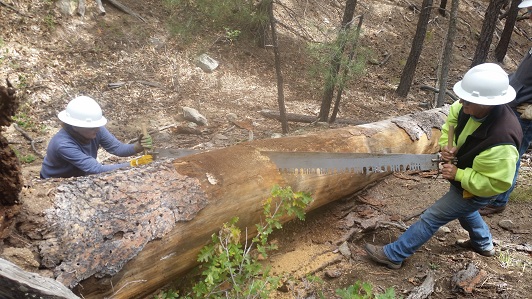 First cut. Sandy is down hill and Mary Ann is uphill. 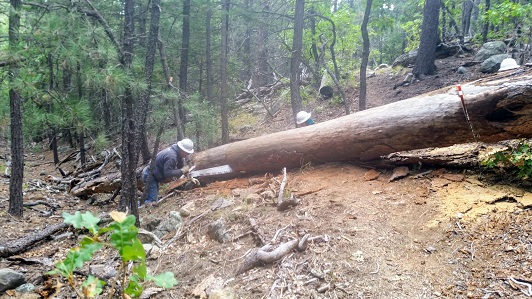 Second cut. Jim is down hill, I am uphill. 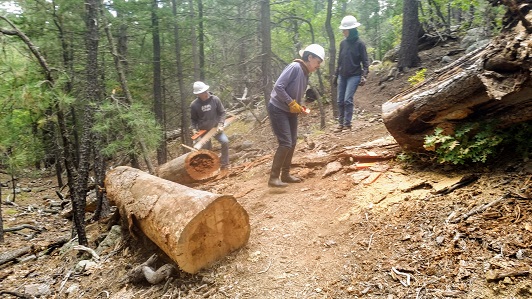 Trail is cleared!! L to R Jim, Sandy and me.

Penny is a joy to ride in the mountains.  She has a tremendous uphill power walk, and Lucy came along behind her, mainly at a walk, so she also seems to have a natural, ground covering walk. It is possible to teach a horse to walk faster than their preferred pace, but it is always nice when they just want to eat up the trail with a long walk! When we stopped for lunch and to work on the log, Penny took a nap, and Lucy followed suit.

I am really excited about Lucy’s show and mountain prospects!! She is pretty laid back, but not dead. I like the way she moves.  I have 11 rides on her and she is just starting to lope. She has been out on the trail, under saddle, walk, trot and lope.

That was a fun set of trips to three of the big national forests in the state!  (New Mexico is the 5th largest state and is about 34.7% federally owned and around 47% public.)

Cloud is out of quarantine!  He has been moved into the barn where he will get a lot of attention. He is getting a richer diet including some grain and he was fine with having a blanket put on him. We had a blast of winter weather come in, with a bit of snow, which is why he got the blanket. He really likes people, it seems. He got his feet trimmed on Tuesday.

One Response to “Three Forests, One Week”