In order to see if my body stays in shape using only horseback riding as exercise, I went backpacking for my birthday with the Spouse and Progeny #2.

We went to Rocky Mountain National Park. Rocky mountain high, a la John Denver.  (Which, since 2007, is one of the official state songs of Colorado. Click the link to hear it.)

My trip leaders billed this as a very leisurely 6 mile hike up Inlet Creek.  It turns out doing pretty much anything outdoors with that duo results in the Epic Dial being in play. And it was 7 miles.  Just saying. 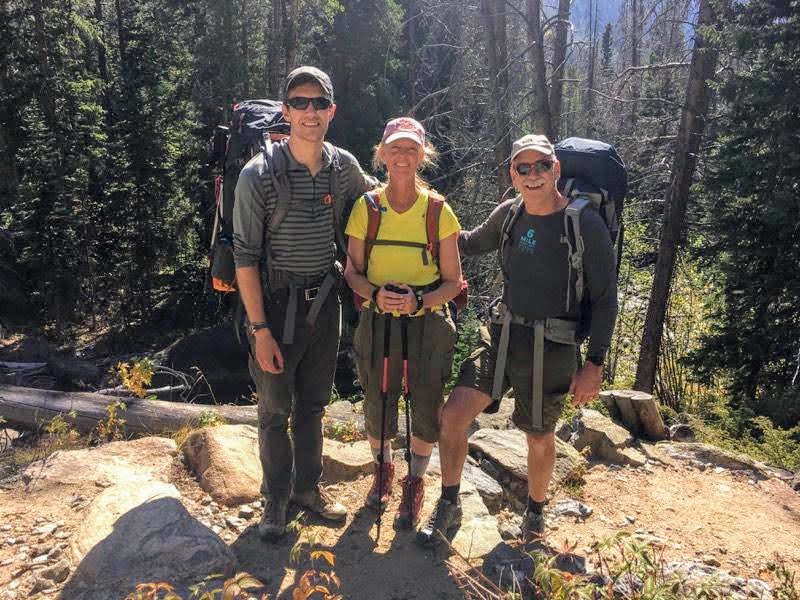 Mark, me and Jim. Mark’s wife Erika, missed the fun. She is in Vancouver!

First off, we drove from Estes Park (the town) into the National park, and the park was spectacular!  We saw a huge bull elk, a huge dead bull elk, pronghorn and then I said, “I would sure like to see another moose” (having seen some in Alaska).  We turned the corner and there was a bull moose!

I then tried conjuring up a bear on the drive, but that did not work. (We were also bear-free out on the trail, which was fine with me.)

The hike in was uphill, but the grade was gradual, so while is was not “very leisurely”, it was not strenous.  Also, my pack was light (this being a one night excursion), so the hike (and a short-on purpose-freezing cold swim in the creek for Jim and Mark) went well. 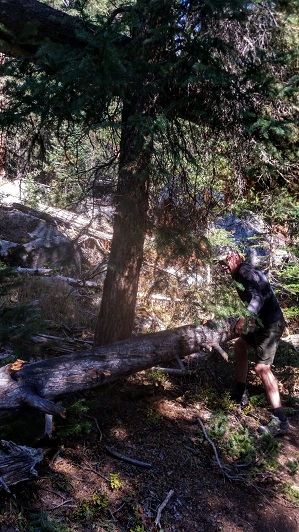 I took note of the light stock use, and the fairly stock friendly trail.  There was even a stock by-pass area near a popular waterfall. 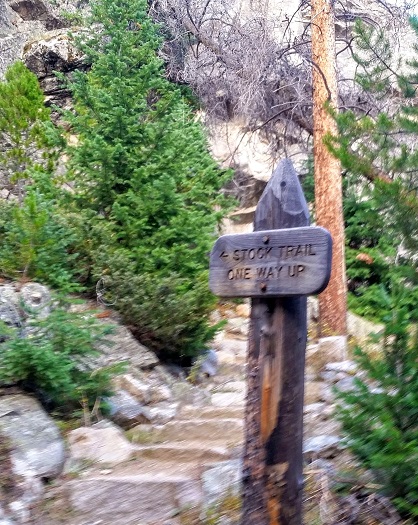 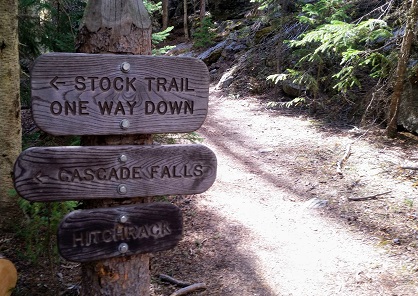 In general, the trails we hiked were really well maintained.  This is because the park has THREE paid trail crews and they have a chain saw exception for some of the work they do in the Wilderness, which normally is off limits to machinery.  Here in central NM, the step-child of the trail crew world, I guess, volunteers do the bulk of the work, with no chainsaw exceptions, and we can’t keep up. Trails that used to be maintained in the Pecos and the Manzano Wildernesses are currently impassable to hikers, let alone stock.

We made it to our reserved campsite (Ptarmigan) by mid afternoon, got our tents set up, and of course had to do just a little more hiking.

“Oh look,” they said, “It is just a short way to a little lake. And there is supposed to be a social trail up this creek.” It did look straight forward on the map–except for the pesky, very close together, contour lines, indicating extreme steepness–as in 1000+ feet in that short way.

Of course, the whole thing degraded into bushwhacking over lots of big dead fall and scrambling (but not actual rock climbing) up.  This  always happens when you go off trail with those two. Every.  Single. Time. 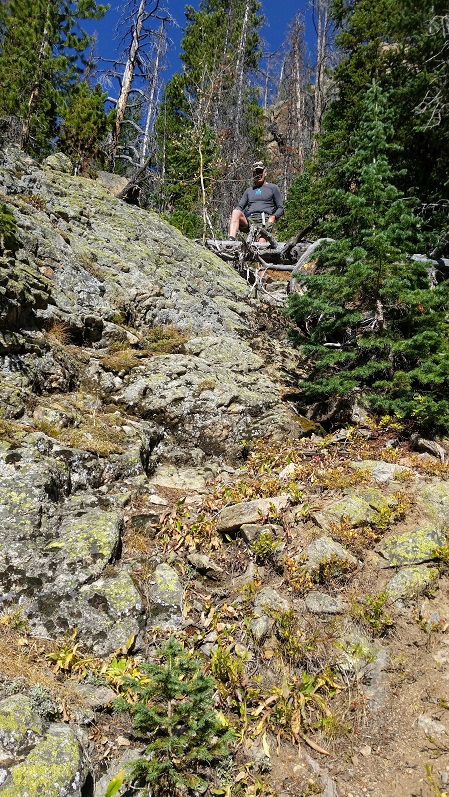 Yes, this is the “trail”. Straight up.  Typical. 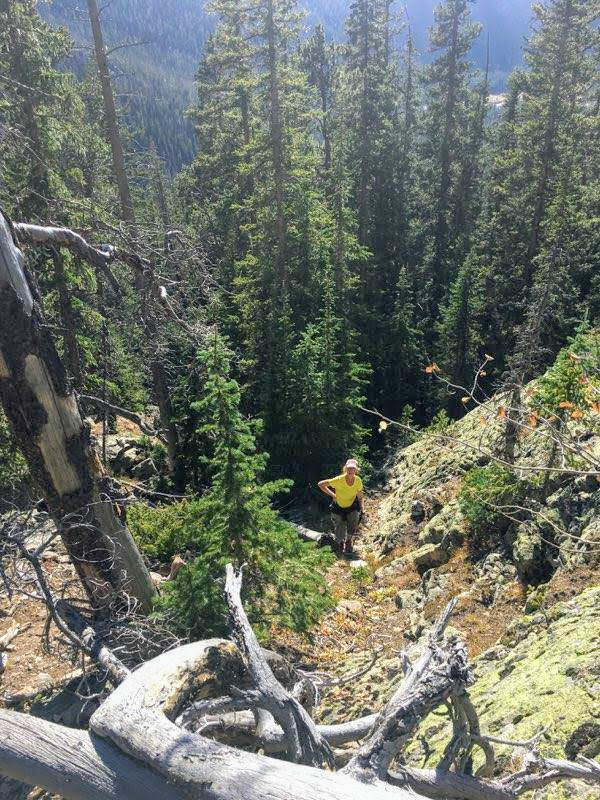 The lake was lovely though. 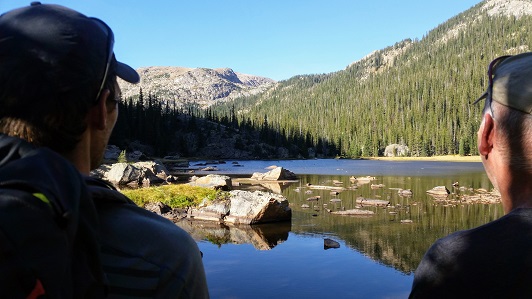 Coming back down was part of the adventure. 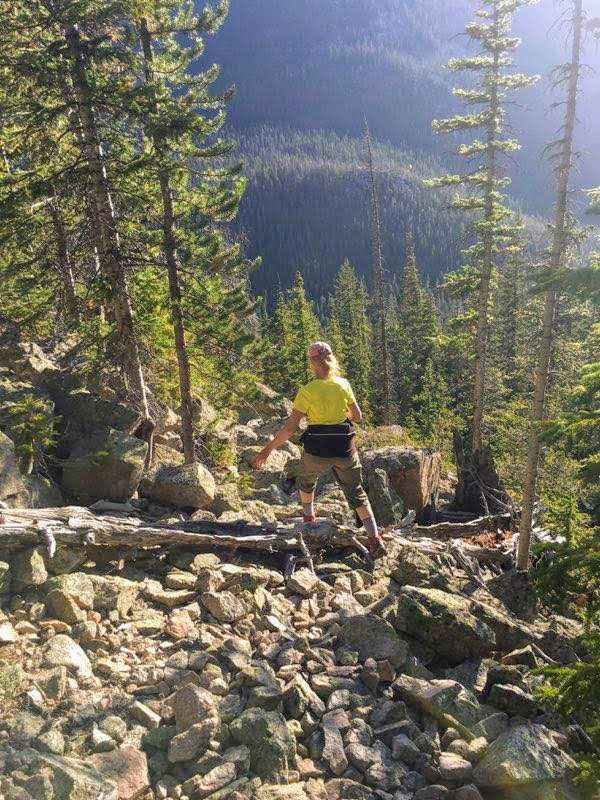 We camped in the valley straight down from my head. The campsite was closer than it looks, but it was as steep as it looks.

The next day, we had to hike the seven miles back out, but before that, well, hey, let’s hit this other lake, three miles in the opposite direction, and up another 1000 feet. 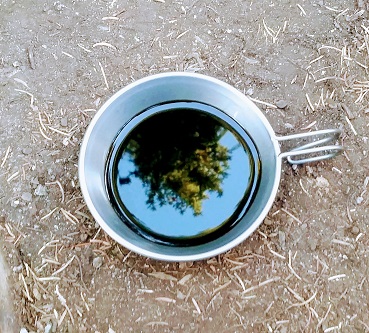 There is a tree in my cup! 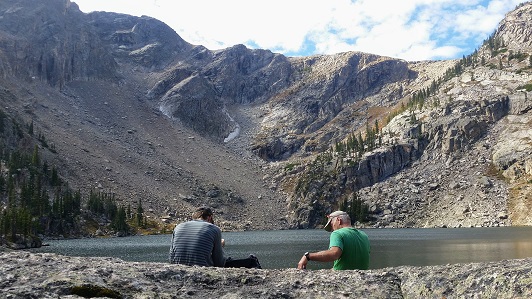 This was the second lake, near 11,000 feet. There is even a shred of last winter’s snow on the far face.

It was a darn good thing the three miles back to our camp and the seven miles back to the trailhead were virtually all downhill, because by the end of the day, my muscles had lost all their uphill power. This was probably due to a combination of glycogen depletion, micro muscle damage which is a result of vigorous exercise, and calcium leaking from the sacroplasmic reticuli (Yes, I am teaching an anatomy and physiology class this term.)

Nevertheless, it was a 13 mile day and close to 21 miles in two days.  That is a decent showing for the Only Horseback Riding Fitness Program!

I am only-ow-a little sore!

In other news, I talked  Walkin N Circles into rescuing  a 16-year-old Arabian gelding (with the deal that I’d be his sponsor).  He is in very poor shape, but he is in good hands now, at the ranch, where he will stay until adopted.  I will try to go meet him this weekend and will post stories as he progresses.  He is named Cloud (after the gray gelding in my book, Callie’s Star.) Visit the rescue ranch website if you’d like to donate time or money! It is a 501C3, so contributions are tax deductible. 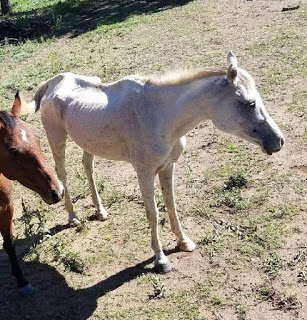 This is one of the Livestock Board pictures from 9/16 or so. His legs look decent and he has a nice head. And he is SOOOO thin.

SO thin. But I still like the look of his legs. 9/26 at Walkin N Circles. Photo by Mary Ann Shinnick.