For the last eon, the Pecos Chapter of the Back Country Horsemen has gone to Beatty’s Cabin in the Pecos Wilderness over Labor Day. If you click here, you can check out five years of Labor Day blogs.  I am sure there are more.

But this year, we went to the Manzanos to work on the Ox Canyon Trail.

We stayed in the Ox Canyon Campground. 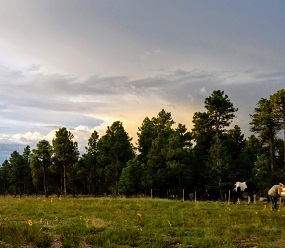 Pretty ! Jim and Terri set up an electric pen. We highlined.

Here is a link to a topo map.  This is not a very well known campground and it was perfect for our bunch of horse trailers.  I think three other parties drove through over the weekend and because we had sort of taken over, they moved on.  It is a a dry campground, in that there are no water spigots, but there are nice tables, fire rings, and a decent outhouse!  There are good places to highline stock and plenty of trailer parking.

On Friday, Mary Ann and I met Jim and Terri Gore and we went on a little reconnaissance ride. Of course, there is a fire scar.  It is from the 2008, Trigo Fire, I think.  There is good grass, ponderosa regeneration and lots of acorns on the scrub out.  There were many deer and we saw bear sign (big piles of poo), too.

We noted over 20 trees that needed clearing, and some spots that needed lopping. The trail, as far as we went, was very pleasant. 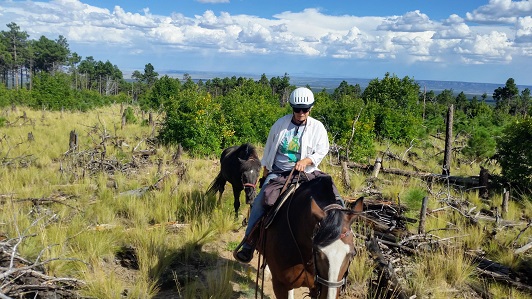 Last time we rode Ox Trail, we all got scared on a particular section of trail. I was hoping there was a reroute, but we didn’t far enough to find out on Friday.

On Saturday, we got up, ready to work, and were saddled and about to head off at nine am, right on schedule.

The sky, however, was blackening and lightning started flashing closer and closer.  Just about everyone but me was mounted.  (I was slowed up due to packing up LT with tools, which is a bit of a dicey business as she doesn’t like to be banged.  I padded the panniers and made sure everything was secured to the pack saddle.) Everyone was kind of looking at each other wondering if we were all about to get fried, when my Jim pointed out that we really ought to wait until this electrical craziness had passed on by. 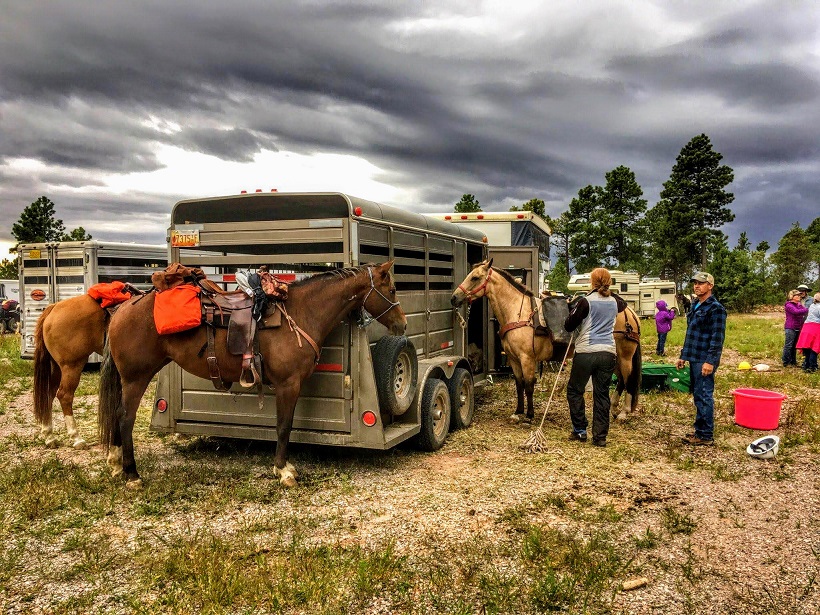 Kind of reminds me of some horsey version of the Wizard of Oz storm. Not that we are in Kansas. Penny’s butt, Indy and LT looking like she is loving being packed (not). Photo by Terri Gore.

So, we dismounted and tied up.  Whereupon, the sky opened and the thunder rolled. This lasted until after 1:30pm.

Most of us ended up untacking and putting our animals in our trailers, out of the lightning and rain.  It was nasty enough weather that the animals seemed happy to be trapped in their trailers.  It was a lot warmer and dryer inside!

Us people hunkered down in our campers and tents.  We had cell service (!!) and the radar kept saying it would quit raining around 2pm, and it was right. The rain stopped, the temperature rose, and a fog sprang up. 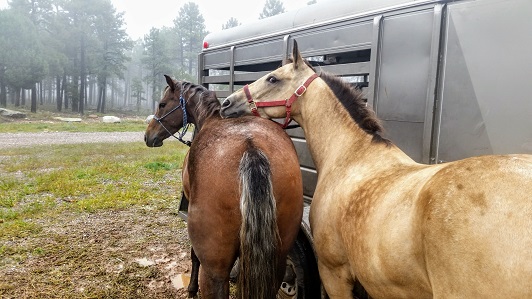 ah! out of the trailer! indy, where’d that fog come from? 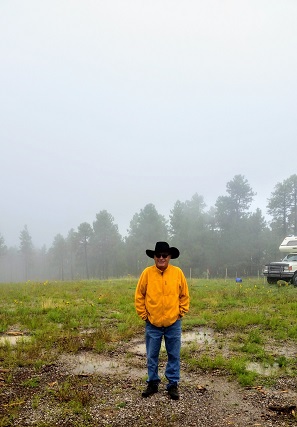 Alan in a fog!

We decided to tack up any way and we rode out. It kept getting warmer, and the fog was thinning. 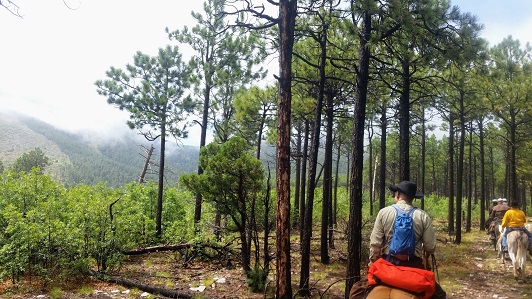 See the bit of blue in the upper right hand corner?

Then in a magical swirl, the fog lifted and was gone.  In a mere instant! I wish I had a video of that because it was so surreal!

Apparently, Jim W., with his halo-ed helmet was the cause of the great fog dispersal! He attracted it all to his hard hat! The afternoon became positively beautiful and we eventually shed our rain gear and cleared 20 trees and lopped scrub oaks that were crowding the path!  A good afternoon! 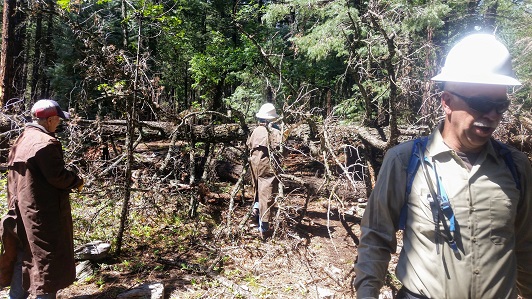 We had a potluck dinner to the singing of the spadefoot toads.

On Sunday, we had a wonderful group breakfast hosted by the Kingsbury’s and then another big black thundering rain cell taunted us from the south as we tacked up.  This time, the weather stayed south and east of us and we ventured past the easy part of the trail. We cleared another 16 trees were on the look-out for the new bypass around the scary cliff edge of my memories.

Except, no by-pass exists.  The trail still has a scary cliff edge section and I found the spot where Cometa hung his lash cinch on my last pass on this trail. We trimmed that up, lopped shrubs to widen some areas and did a minor re-route. It is much better now, but still not a trail section for the weak of heart. I’d take Penny, but I’d think twice about a green horse. We did not actually ride our new and improved pathway, as it was getting late.

We headed back, instead.

Jim and I hung out with the dogs for a bit before driving home, and we found the toad’s water hole that no doubt got a big inflow from Saturday’s rain! 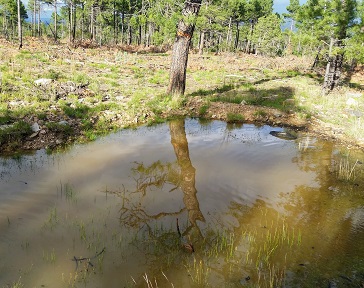 I sure do like our Back Country Horsemen chapter! These are the people I know will step up for each other in times of need. Great group of folks with diverse ideas and beliefs and, huh, we can still get along and like each other.  And we have grand adventures!