Chapter 15 of Callie’s Star is posted!

As you may know, my new Appaloosa ranch horse prospect, Lucy, is here!

She arrived two weeks ago. Thank-you Connie and Don for selling her to me and getting her from Canada to Montana and David for getting her to New Mexico from there.  I have only done a little of this and that with her so far, but I have still learned a few things about her!

She understands horse language and herd dynamics.  She was raised out on pasture with other horses and it shows.  When she first met the crowd over the fence, there were no dramatics.  She is still in a pen alone right now, but as soon as two horses head home, she will be out with LT and probably Atti. Yes, there is always a risk, but the horses seem so much easier to be around when they also have horse friends they can touch. 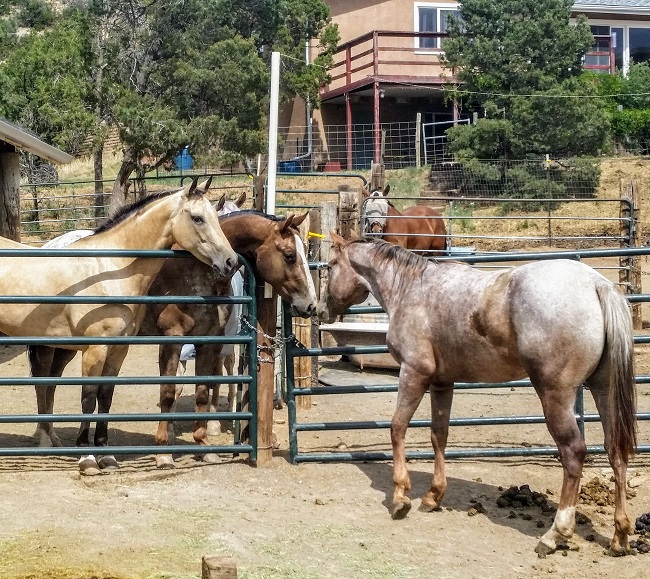 L to R: LT, Cannon, Atti anxious to meet Lucy. Cometa is in the background.

She is short.  She is 14 hands at two years old and put together nicely.  I am fine with short.  I think LT might have been about 13.2 hands at two and pretty tiny.  LT is only about 14.3 now at 8 and she is a fine athlete.  Lucy’s half sister, All Round Sundown, that I rode for Whispering Spirit Ranch, was 14.2 and also an excellent performer.  Lucy should mature to 14.2 or 14.3, which is, to me, a great size.

She is cute! I liked her eye very much in the photos I got before I bought her, and I find her even more engaging in person. 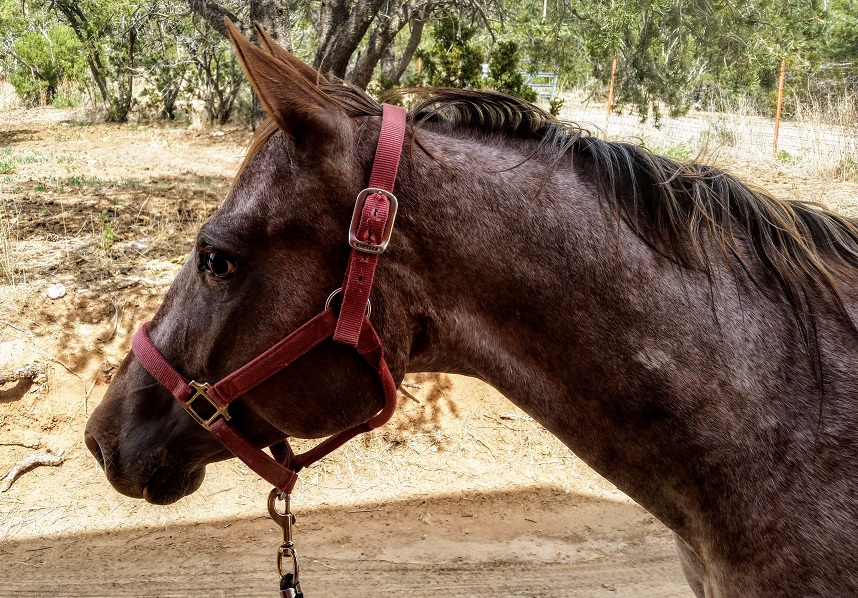 She often has an interested and friendly expression. She is an ears-up kind of girl.

She is friendly.  She follows us around and wants to know about everything, but she is not pushy.

She has a TROT!  I liked what I saw of her trot in her video, but when I put her in the round pen to get some pictures, OH WOW.  She can really trot!  I love a long trot. 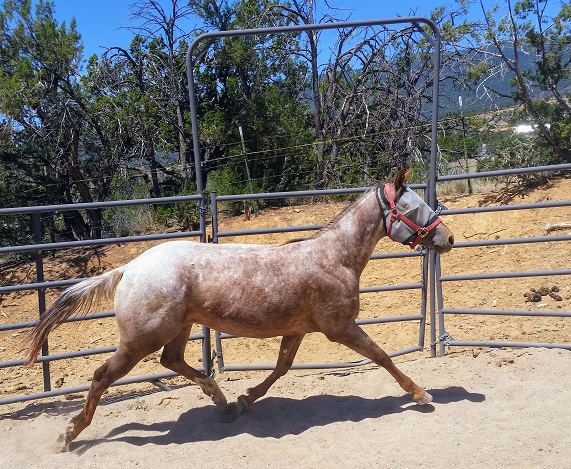 She is handy!  She sits down to stop, moves lightly and with spring, and David said she can turn on a dime (when she didn’t feel like being caught one evening and he was trying to get on the road…)

She is sensitive and attentive.  She moves easily off of pressure but seems to evaluate things and figure them out.  She really did not care for the fly mask going over her ears or the sound of the velcro or fly spray, but she doesn’t fall all apart either.

She fell asleep on her last foot when her feet were trimmed.  Sometimes the last foot feels like the last straw to impatient youngsters. My farrier, Naomi, is very kind to the horses, and Lucy sure thought Naomi was the bomb.  She hung her head and closed her eyes on the last foot. 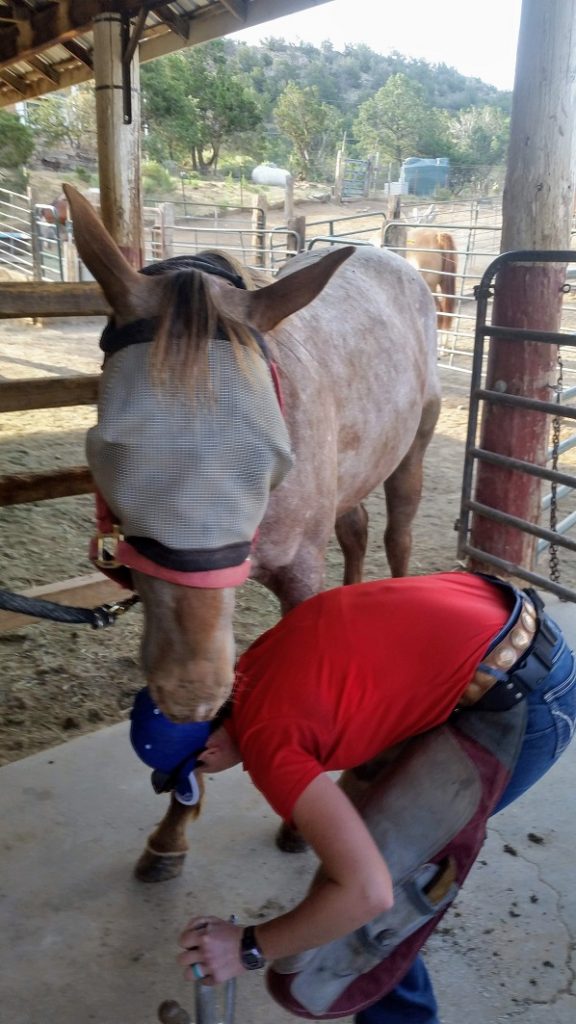 She ponied off of Atti just fine and negotiated the steep railroad tie trail down the hill easily. And kudos to Atti (3 years old), who, with her eight months of training and her basic personality, is becoming a go-to horse around here.  I felt comfortable letting my sister, a non-rider, ride her.  I can pony the babies off her, and I would pretty much take her anywhere and feel like she would get to work. She does still need more experience in new locations to show off all she can do here at home, but given her initial reluctance to trying new things, she has made amazing progress! 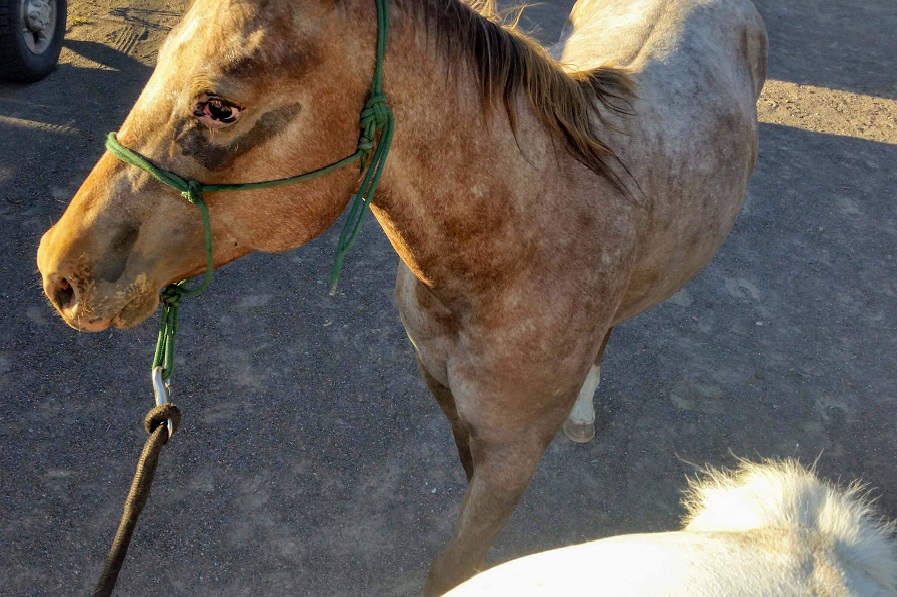 It was sort of hard to get a good picture that included both horses, it turned out. So, we have a sliver of Atti’s hind end, and earless Lucy! Her eye decoration is roll on fly repellant!

I am really excited to begin riding Lucy, but will wait until the fall.  No futurities in her future.  Yes, I do hope to show her some as a three-year-old, but it is when she is four or five that I hope she becomes really competitive as an all around ranch horse: Reining, cow horse, trail, rail. Plus, of course, a backcountry mountain horse who can also pack.

BIG OL GRIN on my face.