By Guest Blogger Kathy Davies (with rebuttals by Patty Wilber) 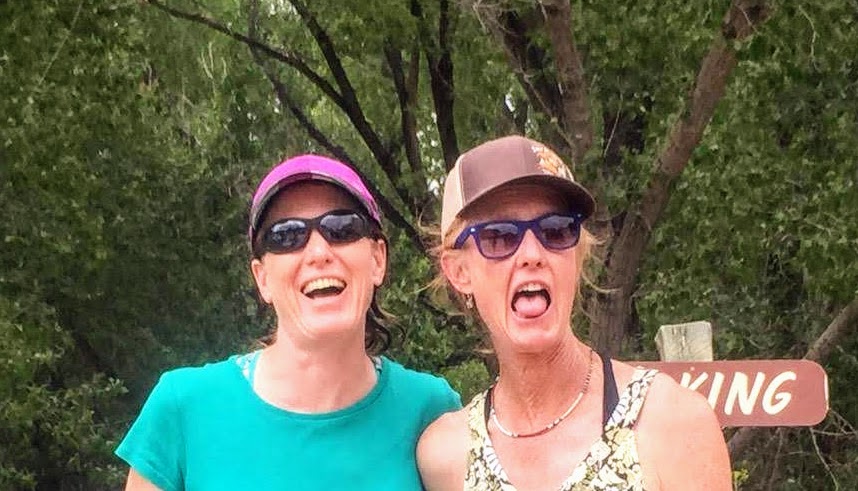 Kathy and Patty at Ghost Ranch

FYI, I am Patty’s younger, horse-clueless sister, here for a week-long visit.

The “lesson” started with grooming, so that went smoothly.  We brushed Cometa and Penny, while Patty saddled Atti.  Then Patty asked Maryanne (my 10 yr old daughter) to take Cometa out to the arena, with strict instructions: “Do not let him eat!”  Maryanne did not let him eat, and I told him repeatedly, “DO NOT eat!” Maryanne did a great job, and we held him in the middle of the arena, far from any tempting grass.

(Patty says: I am pretty sure I saw him eat once, but we will let that go.)

Patty then brought up Atti, and Laurel (my 12 yr old daughter) brought Penny. This is when it got interesting.  Patty said to me “Get up on that horse.”  I, having gotten on a horse zero times since last year, was not clear on how to do that safely.  Patty did give the helpful instruction, “Put your foot in the stirrup and jump up!”

(Patty says: well…what else was I going to say?)

It was helpful to grab onto the mane, which Patty later suggested.

(Patty says: after I had her get off so we could straighten the saddle since it got kind of sideways when she hauled herself up –her words–really! the first time.)

Once on board, I was holding holding the reins wrong.  Apparently those of us who ride once a year, don’t always remember the finer points. 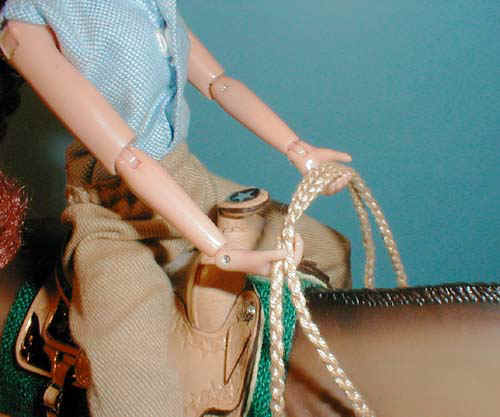 From this site, which is pretty entertaining…

So I fixed that…  It did go better at that point because I felt more comfortable, but then we had to move.  BTW, Laurel was up on Penny and seemed like she totally knew what she was doing, and Maryanne was up on Cometa and also seemed confident. Yep. My 12 year old and 10 year old were much better than I was!

So, then the idea was to walk around the arena.  This sounds simple.

I said, ‘Walk” and kicked Atti’s sides a bit.  She stood there.  I said it again and kicked some more.  Nothing.  Meanwhile, everyone else was walking around on their horses, no problem.  I clucked.  I bounced around.  No dice.  Patty at this point, said, “Ok, hop off.”  I did.  Patty got on, rode the horse around a little (apparently checking to see that Atti could still walk.)

Then I got back on, and we did indeed walk.  For a few feet.  Than a few more.  Patty told me some more helpful things, like “Get your heels down!  Sit on your pockets!” and “Everyone, walk around the arena  next to the rail.”

We all kept walking over to Patty in ever smaller circles.  Patty said, “You know, this isn’t  bunch ball soccer for 5 yr olds!”

(Patty says:  I did nearly get run over (in a low speed way), more than once.)

I think that Atti was thinking, “If I just walk over to Patty, she will take this idiot off my back again.  It worked that first time…”

(Patty says:  Kathy is definitely not an idiot!  Atti just figured I might pet her and let her stand around if she came and stood by me!)

We did walk around a bunch, finally, and then Laurel and Maryanne trotted on Penny and Cometa.  I walked around some more.  But then I found the thing that we were really good at!  Backing up!  When I asked Atti to back up, she did it!  It was great!  That will be a new horseback riding event – backwards riding. I will totally win at that!

OK, then Laurel and Maryanne got thirsty.  So that was my chance to try trail riding.  Thankfully, Patty recognized that I would do better on Penny.  So we swapped it up.  I got on Penny, and Patty rode Atti.

We headed out on the trail. It was great.  Penny followed Atti and we were in beautiful terrain on Patty’s property across the road.  Then, we fell a bit behind.  Patty said, “Ok, catch up!”  I clucked to Penny and tapped her with my heels, and ZOOM!  We were off!  I might have shrieked a little bit as we caught up in a hurry.  Patty said, “Oh good!  You loped!”  I just attempted to breathe.  It was awesome.  And scared the snot out of me!

(Patty says: Yup, I did say “Catch up!” and then I heard hoof beats behind me and glanced over to see Kathy and Penny, yes, loping!  That was not actually the plan, but hey it all worked out!)

We looped around the side of the mountain.  The trail gets steep and narrow so I was pretty freaked out, but the views were awesome.  The trail was rocky, and in a few spots I told Penny, “Thank you for knowing what you are doing…” Or maybe I just thought that.

(Patty says: I did hear some thanking of Penny going on, so either we have a telepathic connection or there were actual utterances.)

I also wondered to myself, “Does Patty take other completely novice riders on this trail? They must have survived…”

(Patty says: Only if they are riding a really reliable horse or are related to me… or both.)

Then we got to a road, which was smoother and more level.  I heaved a sigh of relief.  We trotted a bit and had a grand time!

But the road portion was short lived.  We then got to a single track, heading back to the house.  Atti and Patty headed down, but Penny and I over shot the start of the trail a bit.  And there were some branches.  On the ground. Right in our way.  I was nervous. Penny stopped.  Patty said, “Come on!  Let’s go! I need to get back so I can go to the college to work!”  But we were stationary.  I decided to employ my best skill – backing up!  We backed up.  You know, to get away from the scary branches!   But my attempts to walk forward again remained in vain.

Patty finally came back, grabbed one of the reins and led Penny past the scary branches.  She said, “Your problem is that you have no intention!  You have to tell her where to go!”  I didn’t want to admit to my sister that I was afraid to walk a horse over branches, so I said, ‘Right! Intention!  Totally!”

(Patty says: Weeeellll, OK,I did say she had no intent. but I am denying the “your problem” part. Totally.”)

The last part of the ride was excellent.  Patty said, “Just get down this part any way you can.” – and Penny did fantastic.  We went down a steep twisty part of the trail with railroad ties, and I even steered a few times in a way that I think was helpful. We emerged onto the road, ALIVE.  I was psyched.  Overall, the trail ride was amazing, and I am glad I had the chance to go out there.  It was fun to share this thing that Patty loves so much and to see her and her horses in action.  And luckily, her horses are so well trained that even a complete novice can survive with only minimal psychological damage. No. Seriously, I had a great time!  Thank you, Atti, Penny and Patty!

(Patty says: I’ll drink to that!  And I love having a sister that is one of my best friends (even if horses are not her forte.)) 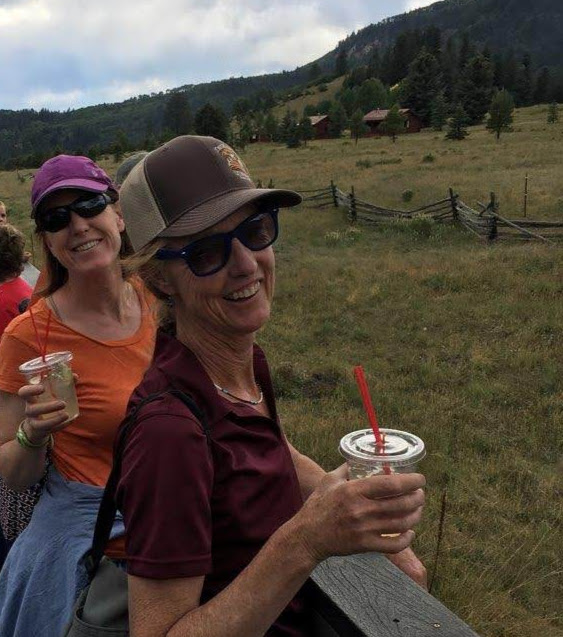 Kathy and Patty on the 4th of July Cumbres and Toltec Scenic Railroad trip.

Kathy says: I am an awesome trail runner and beat Patty at most word games, so that should be worth something!

(Patty says: True. And she beat my high jump record in HS, too.)

Patty and Kathy say: It has been a splendid visit!

P.S. Lucy, the new filly, is doing great and I am really excited about her!! More on her next week.