Chapter 12 of Callie’s Star is posted.

Last week, I left the horses behind and went on a trip that included a tour of the San Juan-Chama Diversion Project.

First, we went to the Brazos Box Ranch.  I had my cattle there in 2011.  Me and Penny (the horse) had a very fine time being cow girls with all five of our mama cows (in a herd that belonged to my friends Peter and David). It was a blast. I have not had any bovines since, but it would be fun to try again. In the meantime, if any one needs some cattle help, you can try calling me (and Penny)! 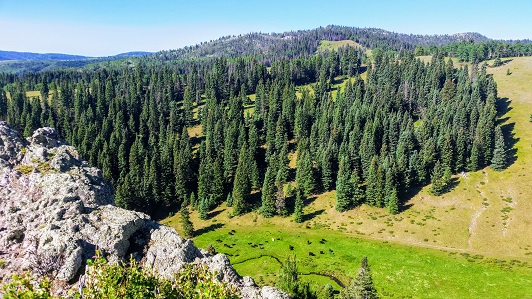 My cows once grazed there!!

There is a lot of wildlife at the ranch and even though it is a very dry year and some of the streams that are usually running are dry, it is still a heck of a lot greener and cooler at 10,000 feet elevation than at 6800 feet at my house. 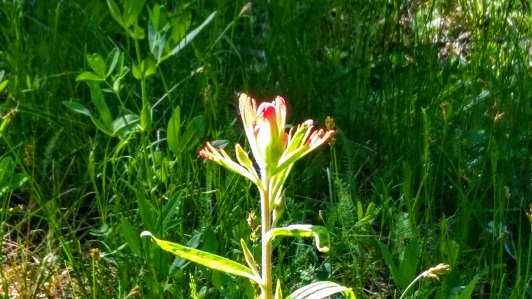 We saw elk, deer and pronghorn antelope.  Seeing them triggers what feels like an instinctive primitive response, making me think I should ditch modern life and go back to a more subsistence existence… as long as I can still have my Internet connection…wine…and a hot shower every few days. Ok, maybe I will just settle for stalking grouse while Jim hunts elk this fall. 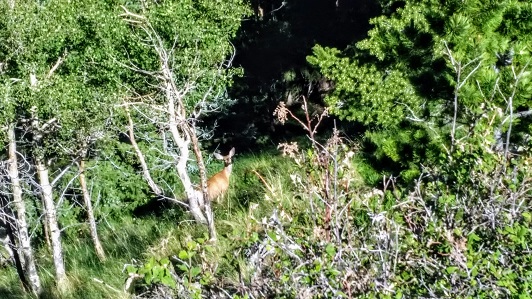 Deer! Not a bad shot for an “aim in the general direction cuz I can’t see a thing” using my phone. 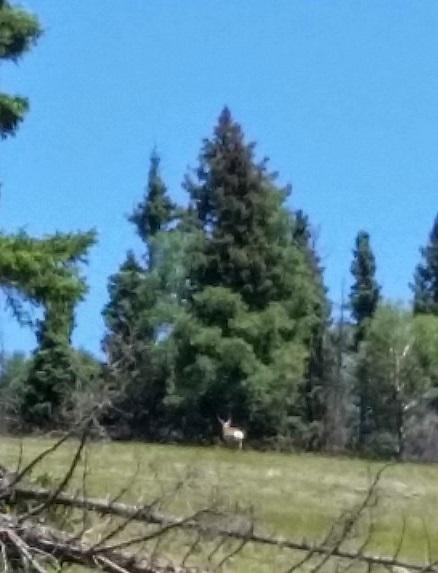 Next, we did the “tunnel tour” of the San-Juan Chama Diversion project organized by the Chama Peak Land Alliance.  We never really saw the tunnels (there are three connected legs), just the inflow sites where water is diverted from Colorado to New Mexico under 26 miles of pipe, and the out flow.

Because of the drought, only 10 cubic feet per second is being sent through the tunnel to the Chama River and then eventually to the Rio Grande.  This project is designed to supplement the drinking water supply for Albuquerque.  Someone was thinking ahead back there 60 years ago since in the 1960’s there was more rainfall, far fewer people and the aquifer level was not falling precipitously. Of course, there was a big drought in the 1950’s, so perhaps that was part of the impetus.  One of the life-long ranchers that was on the tour with us said that 1952 was the year that felt the most similar to this year to her.

My pictures of the project were really awful (most were super crooked and showed basically nothing recognizable).  I also failed to look for “tunnel rocks” at the Azotea site, which is the outflow point.  Tunnel rocks have been tumbled through the tunnels and come out at the end rather round.  Jim has one since these are Bureau of Reclamation (where he works) tunnels and he was up there recently as part of his job! 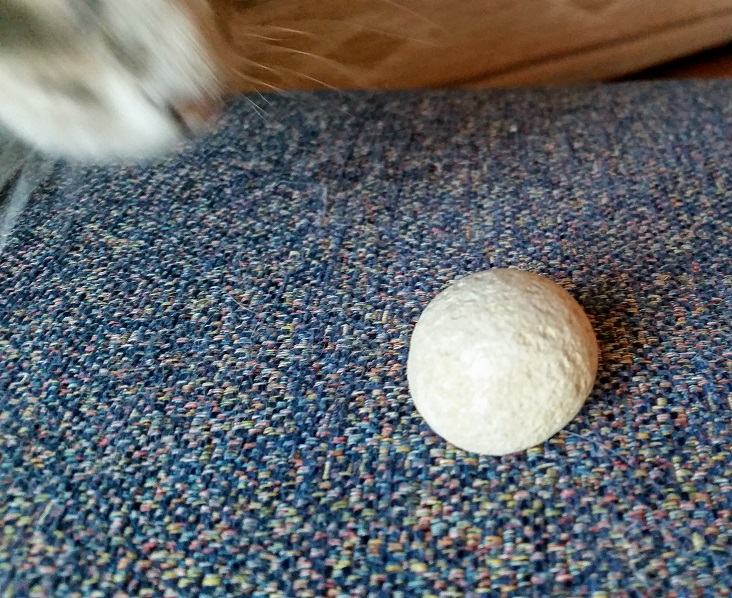 A tunnel rock! Both dogs and one cat were very interested, but only this cat made it in the picture. 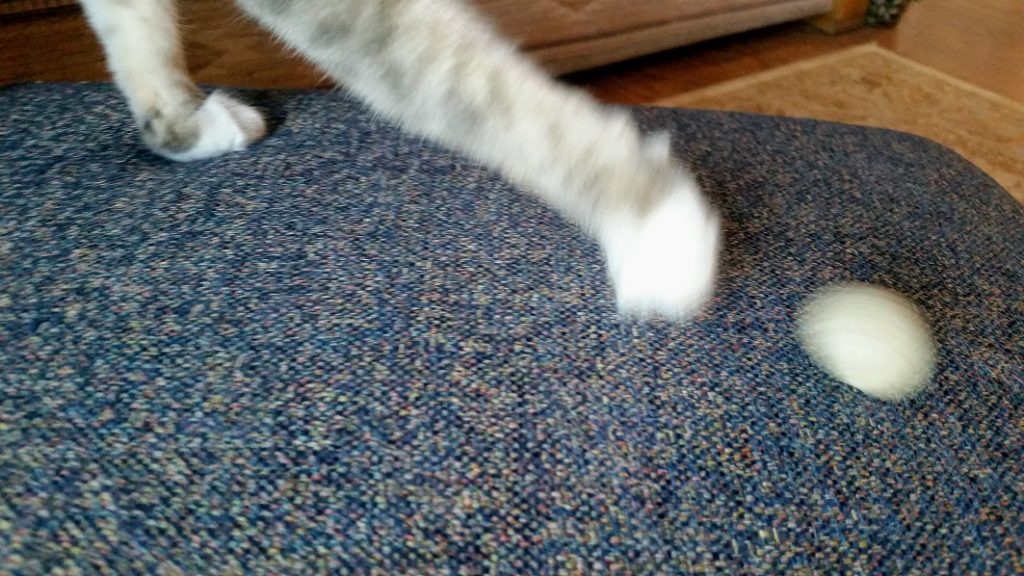 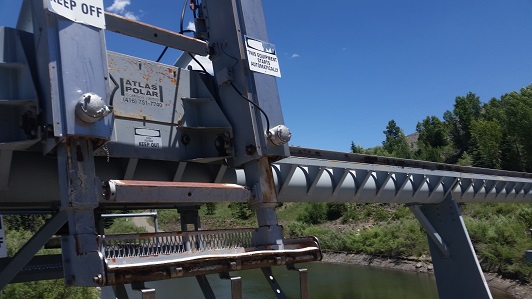 This part of the trash rack cleaner. When water is being diverted through the grates into the tunnels, debris can clog the grate. This piece of equipment goes down and pulls the debris up and into a trash area. Front end loaders scoop the branches out and pile them in a waste area. Artists looking for interesting wood sometimes search the piles. Gravel and silt had to be pulled out of the diversion areas as well, and if you can get to the piles, it is free. I don’t know if one has to work out an appointment and I don’t know if you have to load the material yourself. 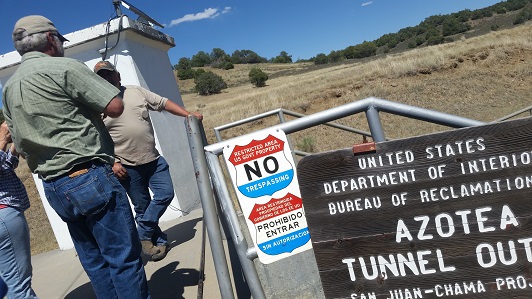 Crooked. if only I had looked for the tunnel rocks!! They can be found on the road as the dredged material is also used to maintain the road.

Rumor has it that at the same time the tunnel was built (early 60’s), a secret underground air force base was also built using the same drilling technology.  To support this conjecture, there were UFO sightings and cattle mutilations, which might have been the top secret airplanes and covert experiments run by the government.  Then there was a fire in the area…but to prevent discovery…there was an earthquake…which was really the secret base being blown up.  If you like conspiracy theories, there is a Wikipedia page for the alleged Dulce Base.

After the tour, we went to a Chama Peak Land Alliance social and I met interesting people doing interesting things with natural resource conservation in schools, at the State level, the Federal level, and on private land. Wildlife or resource management is the sort of career I thought I would pursue, and I still have a hankering for it when I meet such intelligent, innovative and enthusiastic people.  So, if I retire from horse training and teaching pre-nursing majors, perhaps I will look to volunteer in this area. The Chama Peak land Alliance is raffling off some hunting and fishing trips to help fund their work.  You can find information about the raffle here.  You have to call to buy.

Finally, we swung by another property in the vicinity of Cuba, NM.  It is very different from the high country around Chama, but also very beautiful. 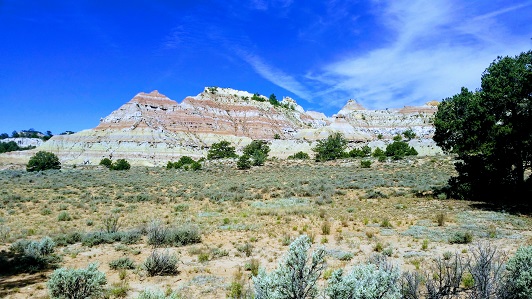 And, for our next round of excitement, Lucy, my two year old filly will be here today, and I have family coming to town for the week!

One Response to “Tunnel Tour”