She Has Attitude, a.k.a. Atti, went to her first Appaloosa show, in Colorado, last weekend.  I confess I was a little nervous, because not that long ago, I was certain she would not be ready.   Even as we left, I was still not positive.

It was a nine hour drive and she handled it really well.  I rode her around after we got there to help her get used to the new place.  I have learned that most of her bad behavior (refusing to go, threatening to rear, no left turn) is largely due to fear, so she absolutely had to be ridden in the arena where she was going to be shown. It took a lot of slow easy work to get her moving comfortably with all steering in working order.

Saturday morning was All Breed Boxing. She did the dry work pattern without complaining and she worked her cow at the level she is at.  We did lose our cow, and then I thought, “Well, hey!  Appaloosa rules for Working Cow Horse say I can call for a new cow within 30 seconds! I will just try it.” So I called for a new cow, surprising the judges, and they acquiesced.  This one wouldn’t move at all, but we still had fun. And we won!  We were also the only contestants.

Sunday started out with halter. We did that so the three year old halter mares class would have some extra entries.  Atti did not stand still very well…

Next was Ranch Trail, and the pattern looked really doable.  Walk though cattle, lope to a big log then go over it, trot to a side pass, go over a bridge and pick up a slicker. BUT there was added level of difficulty…

Going through the cattle and working the gates went fine.  She stepped over the big log like a champ whereas lots of other horses did not.  But then we had to trot to the side pass, which happened to be located next to a “campfire” that had a smoke machine.  Yeah.

“NOT happening,” said Atti.  “i have no idea why there is a cloud coming out of a pile of sticks over there, but it could be a miniature alien ship that has landed with tiny alien cloud people floating over to suck out my brain, and i may not use my brain at all times in a humanoid way, but nothing u can do can make me go over there, and if u try i will try to rear and i won’t turn left.”

“positive,” she said, and proceeded to demonstrate.

“Ok,” I said, as fixing the fear of alien cloud people and the broken left turn was definitely not going to occur in a timely fashion.  We went right, and then I said, “Let’s go do the bridge.”

I didn’t tell her that the bridge was a teeter totter bridge.

She put her head down, looked for a moment, then walked up on it. We got past the tipping point and I held my breath as the bridge teetered and then it tottered.  She didn’t like it but she didn’t panic and she didn’t fall off the bridge. “That was really good,” I told her.  “Now, we will just go get that slicker!”

The slicker drove up in a 4-wheeler and she trotted right up to it!  “Whoo hoo!” I thought and reached for the slicker.  Atti gave a little side step away and said, “nevermind.  i decided i don’t like that 4 wheeler, after all.”

I gave her the side-eye from my seat on top of her, but of course she couldn’t see it.  So, we left the slicker behind and exited the arena.  We went directly to the warm up pen where we worked on regaining our left turn and cooperative mind set.  It took a while since I had to contact the aliens and work a deal in order to get Atti’s brain returned.

She rode very well in Ranch Rail, which is like western pleasure, but faster.

She rode REALLY well in Ranch Riding and got a second and two national points. That was really cool! There are quite a few things we will improve upon, but overall I was VERY pleased.

The last class was Ranch Conformation.  That is halter for the ranch horses.  She might have been a bit tired.  She actually stood still, mostly.  She got a 2nd!  We are going to have to improve our halter skills, though. 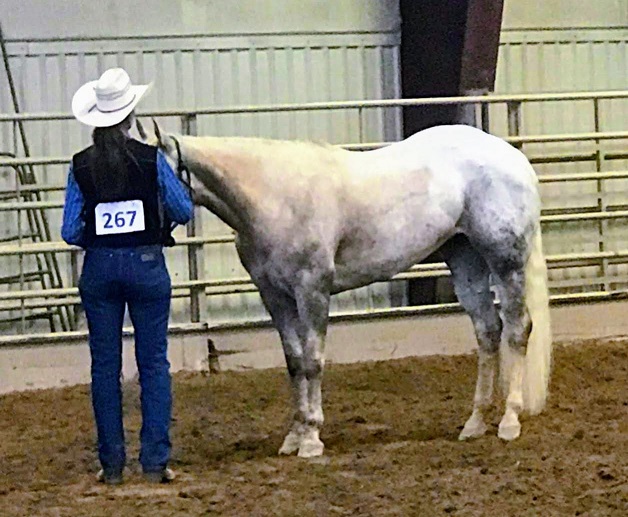 Like, perhaps the handler should not block out the horse’s head?

It was a good show and a good learning experience!  Many thanks to the Mountains and Plains Appaloosa Club for putting it on!

2 Responses to “She Has Attitude”