Our 6th annual spring trip was a blast. Last year we camped.  This year we glamped! 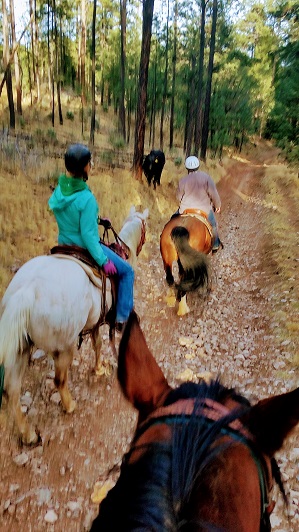 Mary Ann, Siri and I travelled in Siri’s Big Ass Trailer (the BAT–with fabulous living quarters) to the Gillespie Ranch near Mayhill, NM.

We had to take the screens off the BAT so Atti would not eat them on the trip.  I borrowed a fly mask and we managed to tear that instead, so a new one is on order for Siri–cheaper than a new screen for the trailer!

The ranch is a working cattle ranch with 12 full RV hooks-ups and about 30 really nice covered 15 x 15 pipe pens.  Siri drove superbly and Atti travelled well, but as soon as I got Atti set up in her stall, she took a nice long drink and then dumped her rather large water tub into her formerly dry abode.  I am pretty sure she laughed behind my back. Although, why,  I am not certain since she had to hang out in the puddle and I got to hang out in the living quarters! 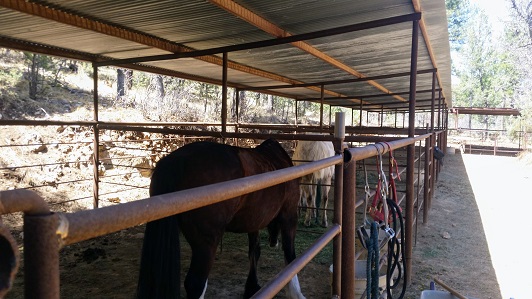 I tied the tub to the stall bars with baling string and she went to worrying the twine immediately.  I tied a second piece, too, and that thwarted her for the weekend.  Ha!  I won! (and I still got to sleep in the BAT!)

I did not hang her halter on her gate (you can see her red halter on Tulip’s pen, above) because I knew she would attempt consume it, or get tangled in the lead rope, or something.  Zodi, her other neighbor, didn’t want her to be bored, I guess, so he took his halter off his gate and gave it to her.  Such a gentleman.  She apparently chewed on it for a while, then stood on it. Fortunately, it survived!

I also wired her gate shut rather than using twine (which she would find to be a toothy challenge).  The gates had good latches, but with Atti, you never know what chaos she will put her mind to.  She did not escape!

It didn’t take long to get the people rig set up.  Siri backed in like an old pro and she did the dirty work (hooking up the black water). Once we were situated, we saddled up. 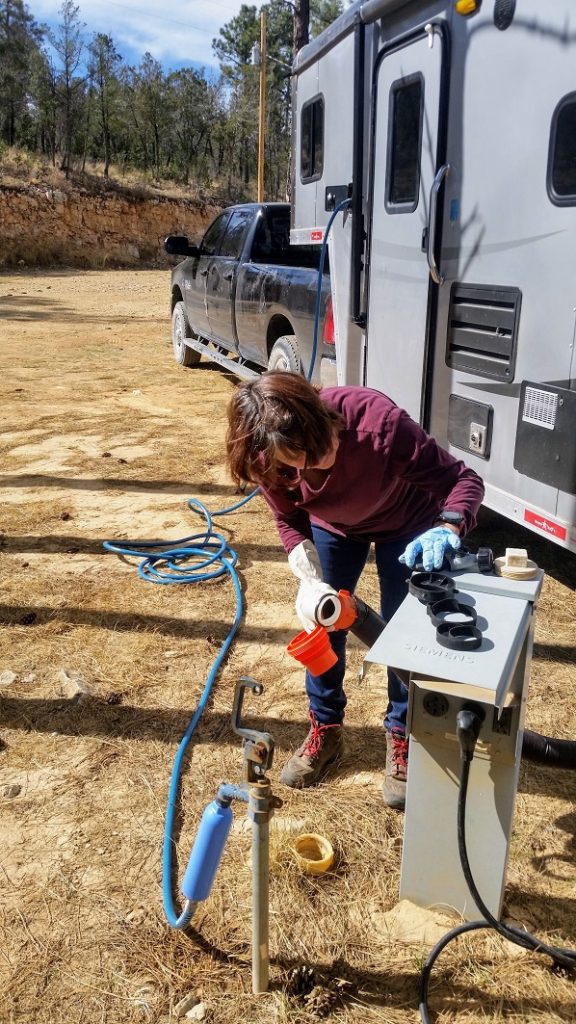 We rode about six miles on the first afternoon. We saw mama cows and  a brand new, still wet, calf!  Even though Atti has been working cattle in the arena fearlessly, out in the wide open spaces, she was a little braver if she could go second. 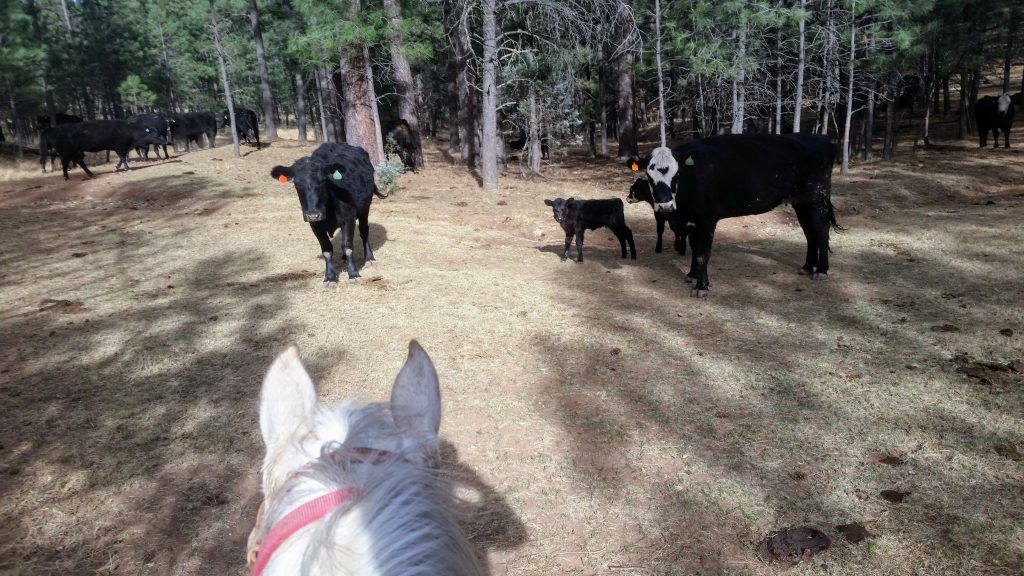 Atti: where is tulip? that cow is looking at me! 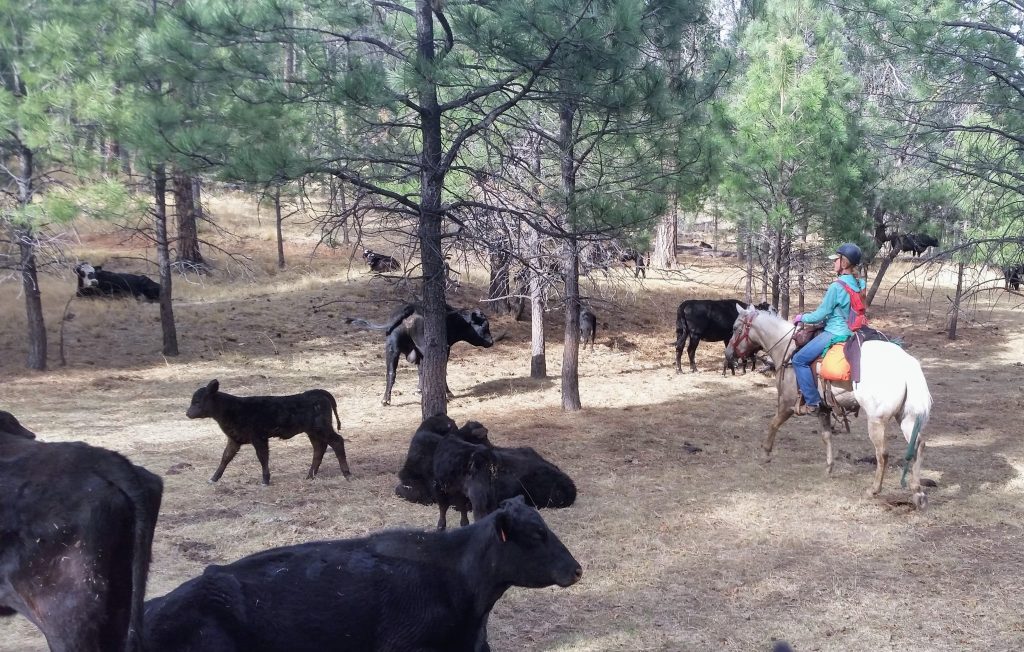 Atti: tulip! zodi! look at me! i am walking in the herd! Photo by Siri.

We made a loop that was not recommended by the ranch management as it had a rocky section.  Rock, shmock.  We’ve got rocks at the house.  Atti was sure footed and comfortable on the steep and rocky downhill section. 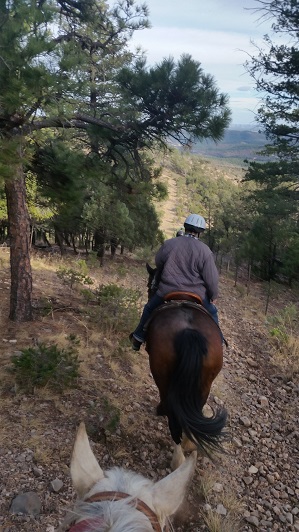 We are heading down! The rocks were not that big, but they got more densely packed and were loose. 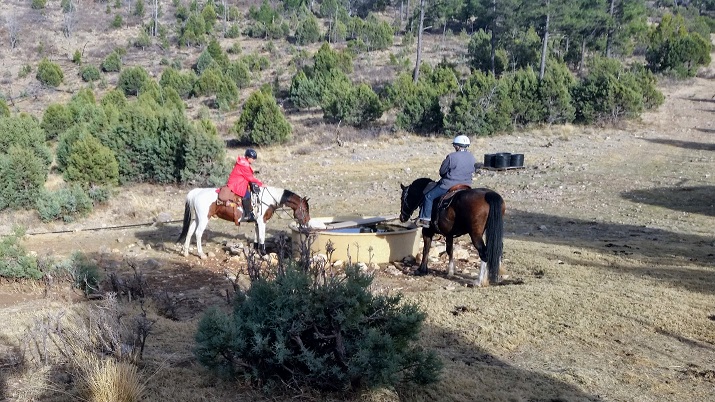 Water tanks were abundant and all our horses were good drinkers! I was proud of Atti-she is only three-and she didn’t have to go thirsty for hours before figuring out the she should drink when she had a chance. She wisely took her cues from her seasoned pals. Siri is in red on Zodi and Mary Ann is in gray on Tulip.

On the second day, we made a 12 mile ride into a 16 mile ride due to two unplanned and one planned side jaunt.

We had lunch at the spot where they do their branding. 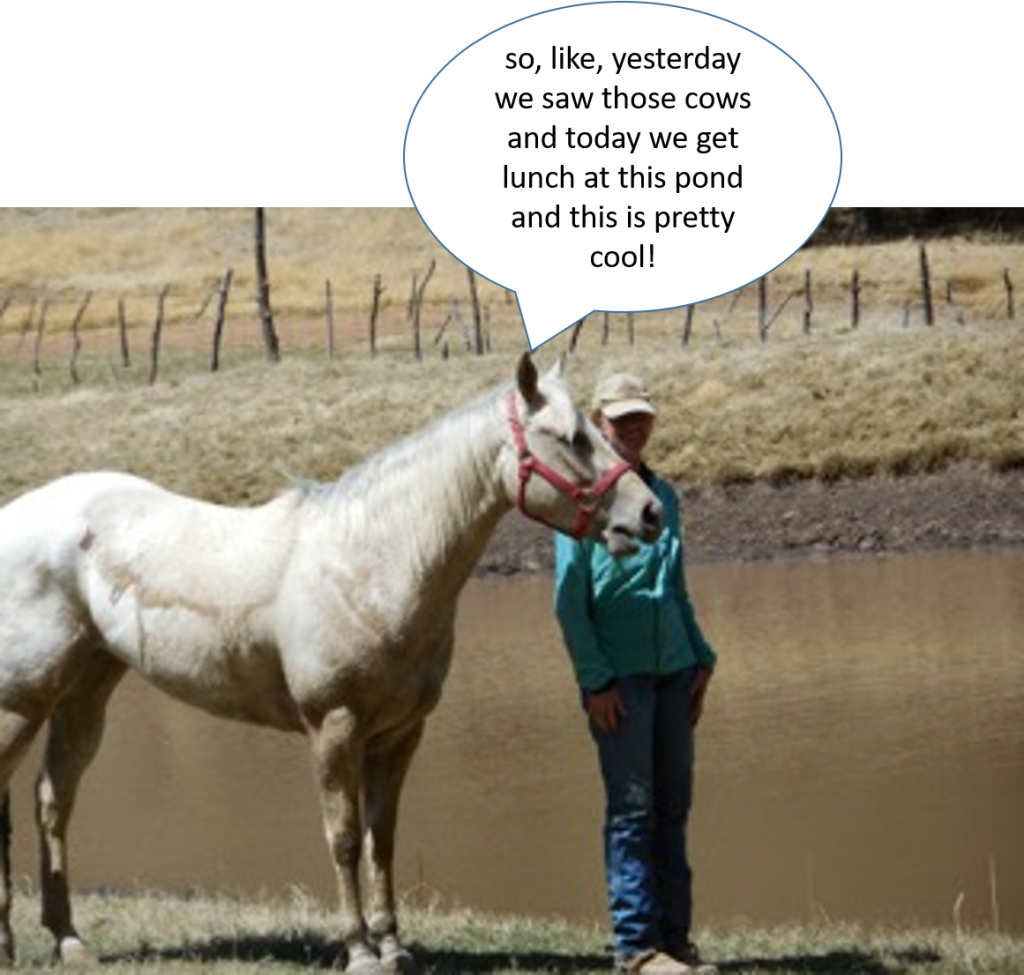 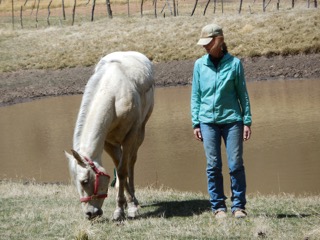 It looks like we are posing for….something. Photo by Siri. 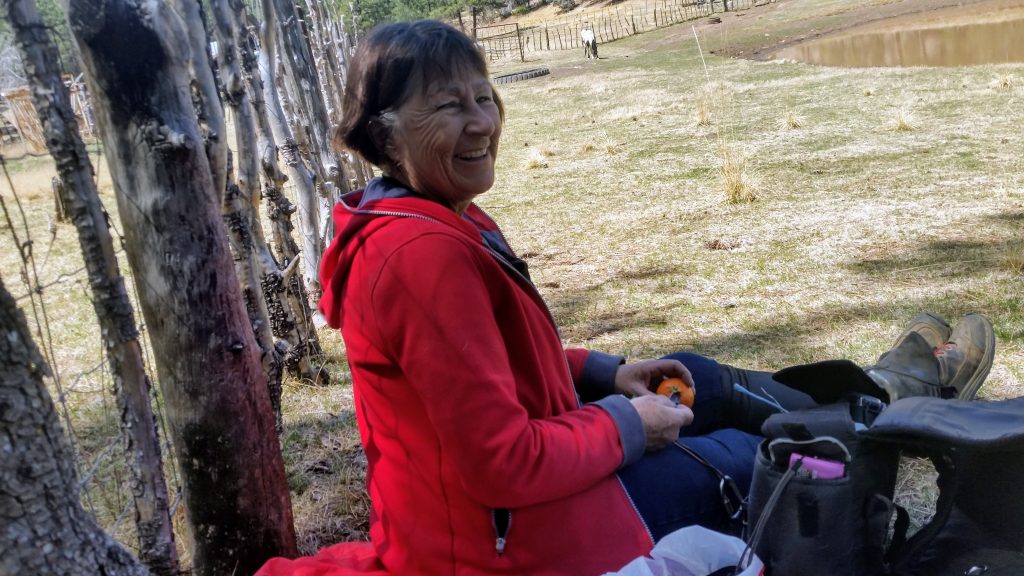 Siri at lunch. I took a picture of Mary Ann, too, but I got her when she was chewing!

After lunch, Siri and her GPS allowed us to make our planned loop.  I got off track on the map and I would have had to turn back. Our route took us by an old homestead with 100 year old crab apple trees.

On Sunday, Zodi said, “no!” to more rocks so we went up a canyon that had more meadows and also more forest.  It was really peaceful and pretty.

Atti was a little slow in her uphill walking speed and she really really didn’t want to lead the team.  I convinced her to go in front a little bit on the way home.  At one point she was trucking along really purposefully, and then we came to a junction.  The ranch was left (where we were going), but Atti was adamant that we should be going right, and furthermore, she claimed I was clearly stupid as I clearly did not know where I was going.  Then, she brought up my getting off track with the map yesterday.

Well, I am pretty patient, but when my horse starts maligning my map reading skills, that is just the last straw (and besides, this time I knew where we were, WITHOUT having to consult a map). We had a little discussion or two, in which I got off and she backed down the trail for a bit.  She agreed to lead for a few steps, and given that we had covered over 30 miles in three days, I called that good and took the pressure off. 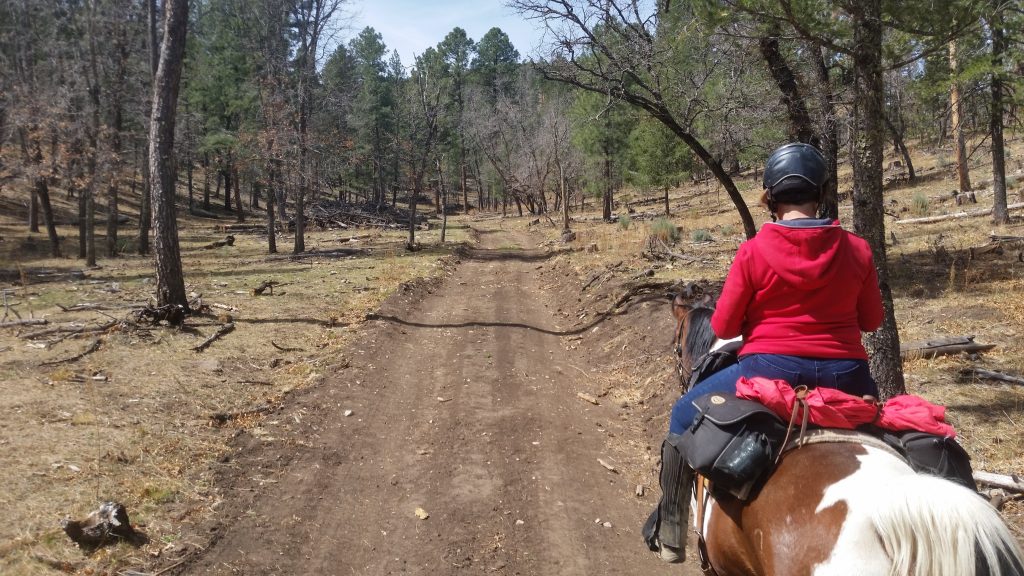 “it is better if Zodi or Tulip lead. they are older”, says Atti.

It was a really fine trip. And how lucky am I to be able to go great places with my friends and our horses (or in my case, Judith’s horse)?

We will have to start planning next year’s riding adventure! Camping or Glamping?