My farrier, who I had used for something like nine years, retired a few months ago.

It has been awful finding a new one! A farrier works for the horse owner, so technically I am looking to hire a new shoer,  but in truth, the best situation is a partnership.  So, rather than a want ad, I think I need an online farrier match-making site.  In my profile I could put:

Looking back on my farrier experiences…

One was afraid of my pony when it seemed obvious to me that she was easy. No second date.

One was really good and I used him for a few years, but then he retired to run a feed store.

One seemed good, so I had him back a few times, but then…Without my permission, he came early, started and finished before our appointment, and (here was the big issue) he put the horse back into the WRONG PEN, with another horse.  Nothing happened, but geez. Stopped seeing him.

I tried a barefoot shoer.  That means she didn’t put shoes on, but instead trimmed so the horses didn’t need them, not that she went barefoot.   I was skeptical as it is so rocky around here, but I was seduced.

She did not have much chemistry with one of my quirky horses and despite initial assurances that all horses can go barefoot without boots, quickly agreed that I was wearing the feet off my animals and they needed shoes.

Another one was quite good for my mountain horses, but then I needed  high-level reining and cow horse shoes.  We drifted apart.

I got set up with a good (and expensive!) reining cow horse shoer but he had some sort of aura that scared the heck out of a stud horse (LT’s and Indy’s Dad, Buckshot) I had in training at the time, for reasons known only to the horse, as I was present for every shoeing.  On the third shoeing, Buckshot started shaking when the guy drove up. I decided to take the advice of the horse and broke up with the shoer.

I told him the story of the stud.  Kelly took his time and soon the stud was snoozing while he got his feet done, and we never had any problems. And Kelly’s shoe job was good enough to carry the horse to a Reserve National Championship in Junior Reined Cow Horse. 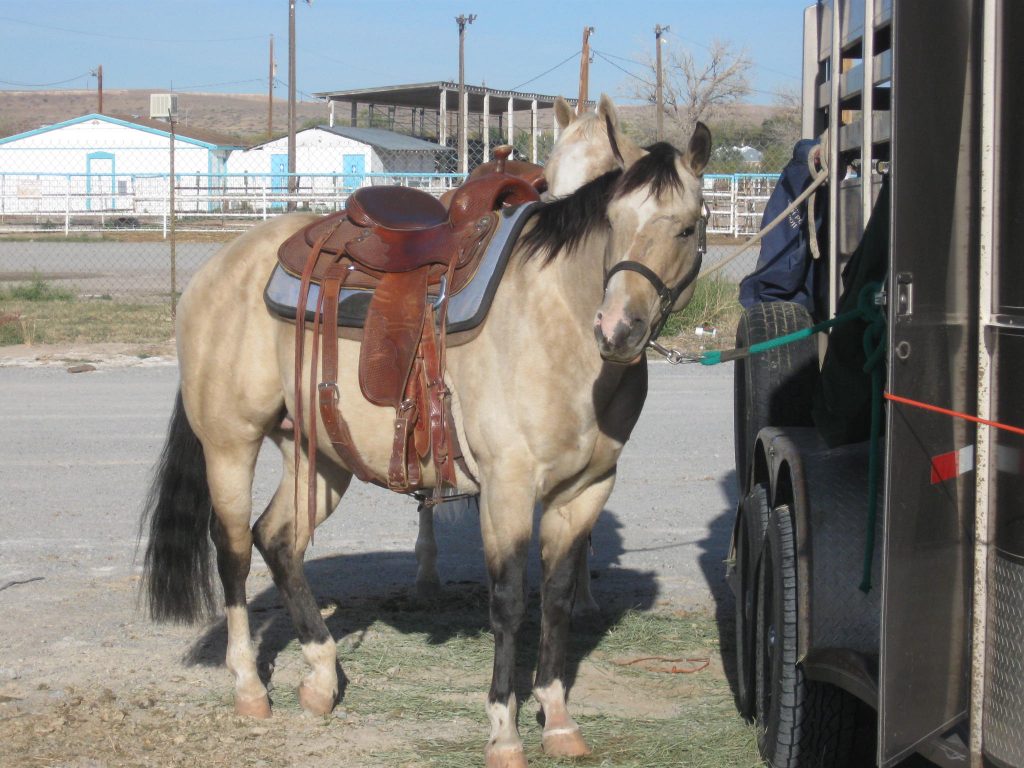 Buckshot, the formerly fearful of farriers. LT and Indy’s Dad.

I warned him about the hard to get along with mare because she would hold a grudge (a vet who missed the vein was never allowed get near again, for any reason).  Miss Horse tried to treat Kelly like the barefoot shoer.  He reprimanded her appropriately and she loved him from then on.

He was able to shoe LT, the perpetual motion machine, without losing his mind. And he performed some shoeing miracles so that she could slide 25 feet in an arena as well as stay upright on mountain trails. 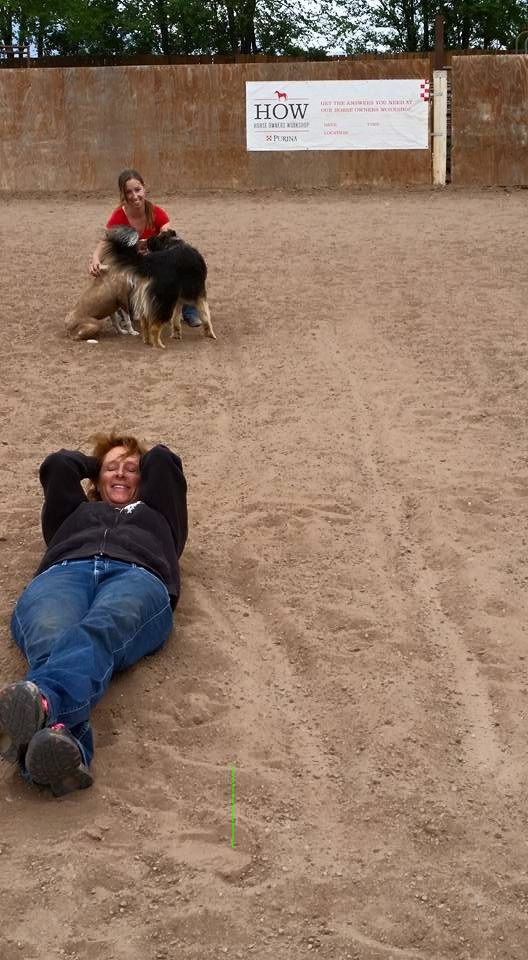 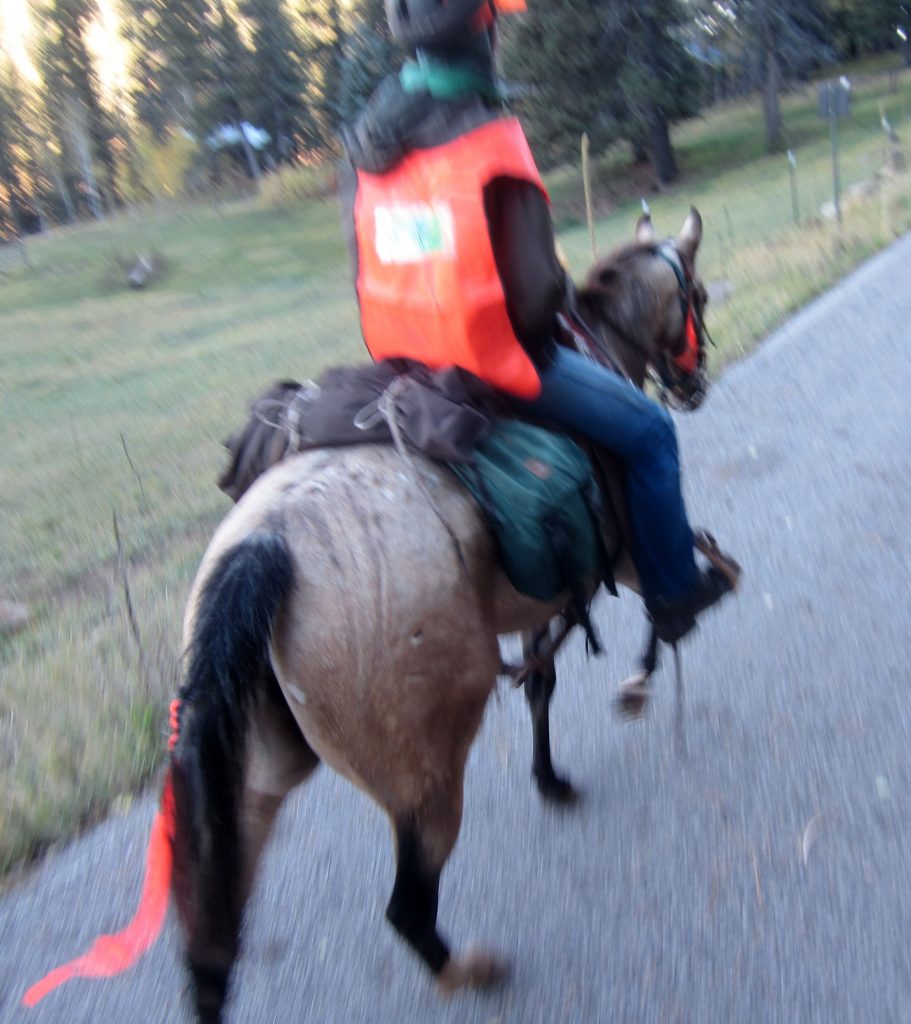 LT is upright here after a 25 mile ride, but just before this, she misjudged a step in a creek and we got a little wet. It was hunting season, so we are very orange. She resembles her daddy! 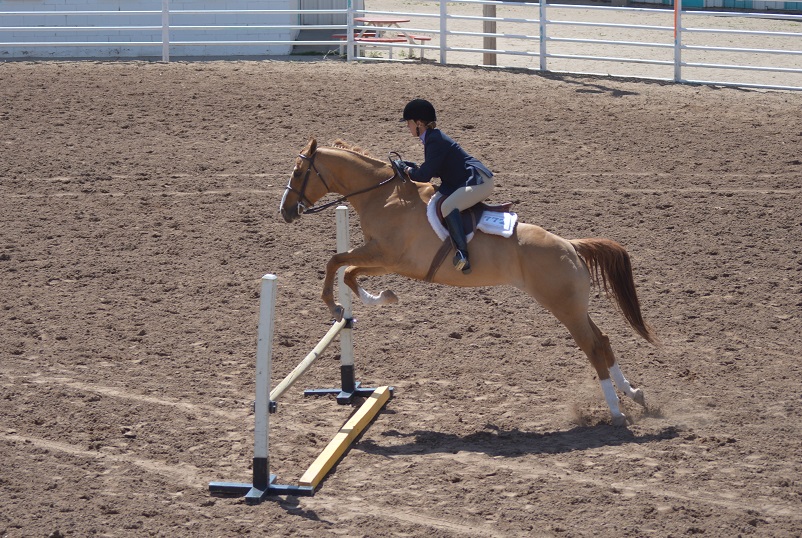 He never cancelled.  Ever.

My horses were never sore.

He would come out to treat abscesses and replaced any lost in the mountains or pulled off shoes promptly.

He helped me halter Indy for the first time as a nine-month old, and did a good job handling and trimming the babies and first shoeings. 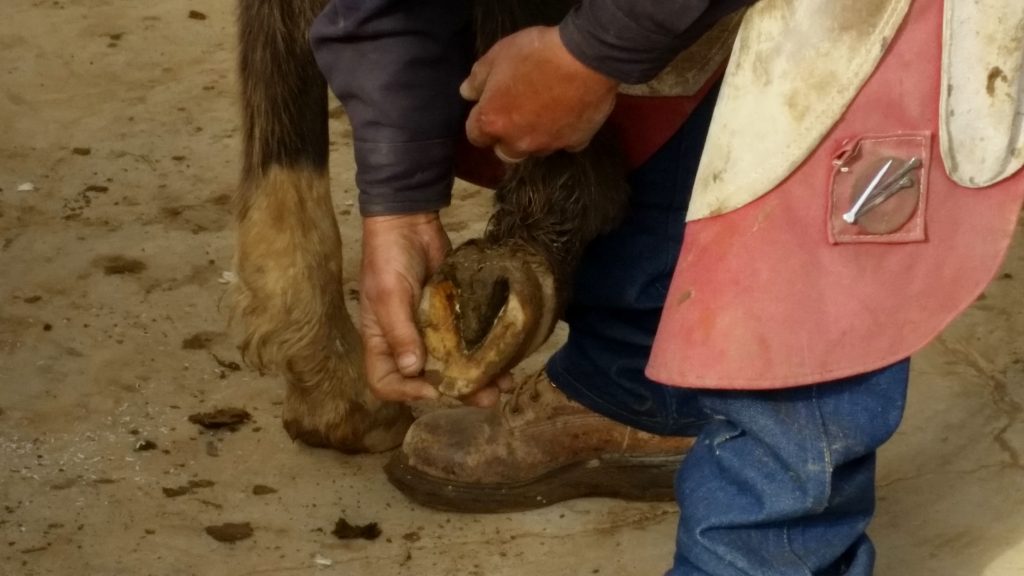 And then age caught up and he retired.

I didn’t even try with those.

Found one that did good work, but it was a bit of a long-distance relationship, so lost shoes did not get replaced, and I got stood-up, twice.

Tried to talk my old farrier out of retirement!  It did not work.

It snowed and rained and hailed this Tuesday, but my first date was not cancelled!  We got along, and things went well with all of the horses, even the one that was kind of nervous and goofy.

I want to be cautious as I have been unsatisfied(!) so often, but, after one meeting, I think I have found my new farrier!

4 Responses to “Finding a Farrier”