From last week: an astute epidemiologist and a disease ecologist that read the blog noted that since horses are dead end hosts for West Nile Virus, they cannot reinfect mosquitoes. Only birds can do that. Thus, vaccinating horses doesn’t create herd immunity for this disease; vaccination protects your animal but does not decrease transmission to other horses. The herd immunity concept does apply for many other diseases.  For West Nile, I guess we need flock immunity!

Because it has been so warm and dry, The Pecos Chapter of the Back Country Horsemen were able to complete our first project of the year, a month earlier than usual.

We had a LOT of participation and we able to tackle Box Trail with one group while another group worked on Spruce Trail up to the snow and then Red Canyon as well.  All the trails had trees. Lots of trees.

The Box Crew started at Red Canyon.  Box Trail is the one mile link from the campground to Ox Canyon Trail. 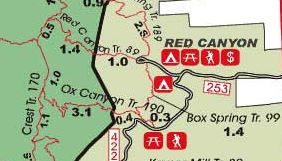 This year we have started a mentorship program for new members and we billed Box as a fine introduction to BCH.  Not steep, not rocky and no water crossings this year since it has been so dry.  We also figured it would have a lot of down trees since it goes through an old (2006?  2008? I forget) burn area (all burned trees must fall on the trail) and because we did not get to it last year.

The project matched our billing very well, except the down trees were all before the burn area. We kept busy clearing big trees and small trees at what seemed like 200 yards intervals.  It was great practice for mounting, dismounting and having horses tied to trees for long stretches.

I took Penny, and she seemed to really enjoy sleeping during the numerous stops because when I would go get her to move on to the next down tree, she could barely wake up enough to unplant her feet!  This was partly why I took her instead of any of the others–she is very relaxed on the trail!

To start our trail day, we first took a “detour” on a No Horses trail (we missed the big sign…) but we cleared two trees in the first quarter mile, so at least we improved things. 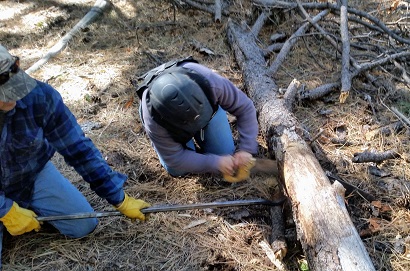 Patty and Bill S. finish off this smallish but tough log with sawing so fast you can hardly see the blade!

Then we recalculated (without Google Maps or anything) and returned to Box Trail, where we hit a huge tree 50 yards from the parking lot!

All of our new members (Patty, Bill, Karen, Lilly, Buzz, and almost new Sandy M. and Marianne R.), and most of our old hands, too, had a go with the two man saw.  It only took a 40 minutes or so to get that tree gone. 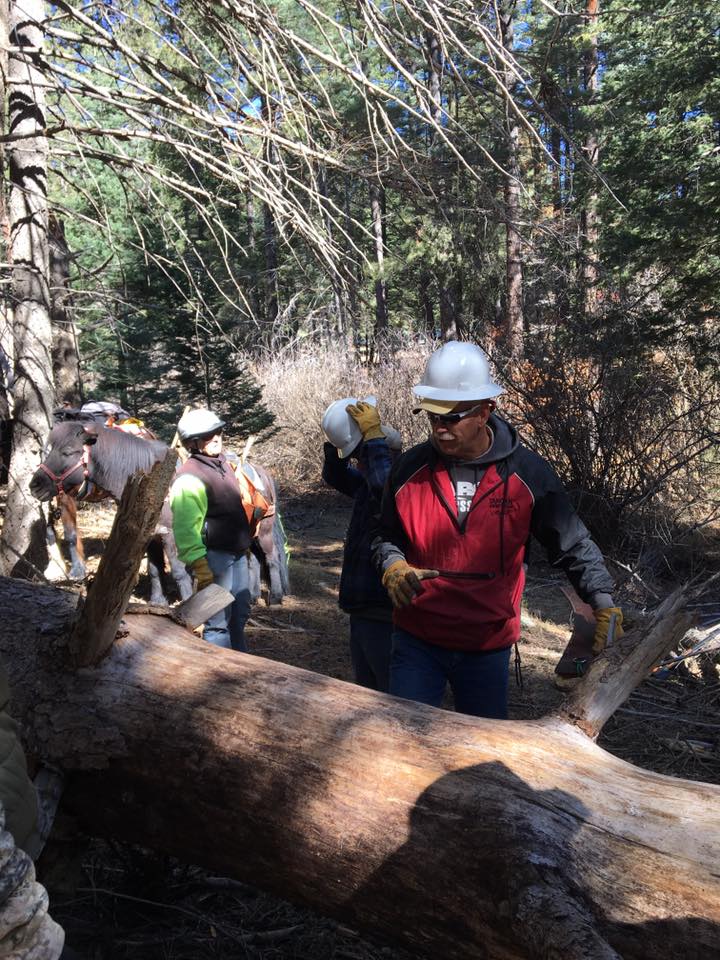 The first big one. Jim, B-Rated Sawyer, on the job! Photo by Patty Shuert. 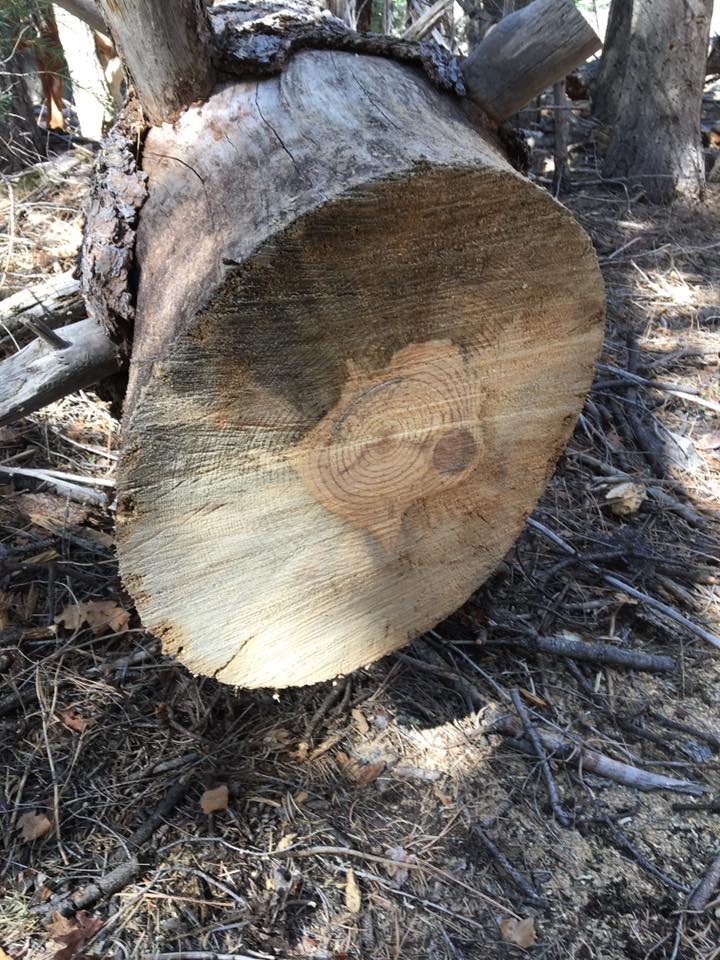 We had branchy trees that fell along the trail 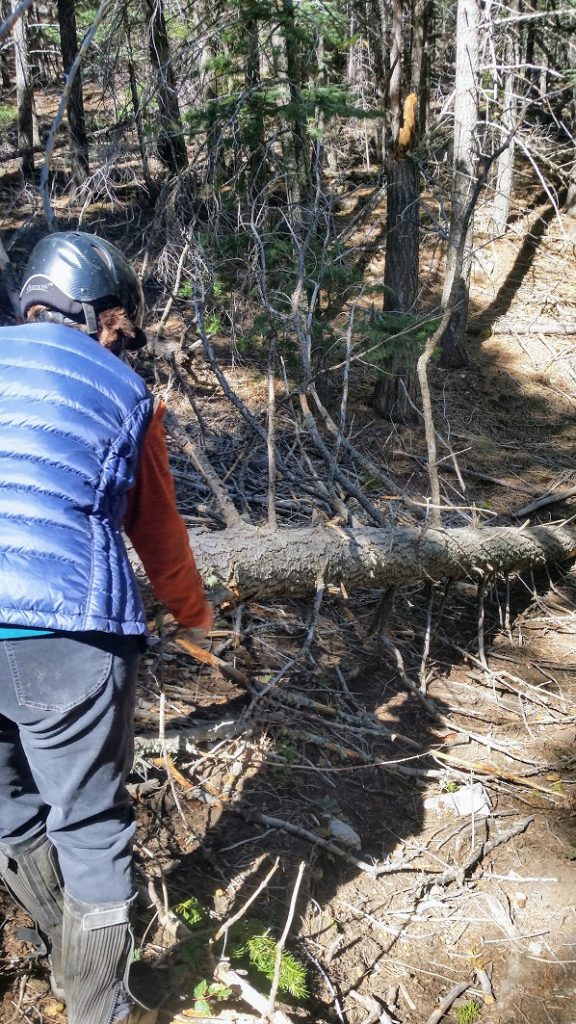 Siri breaking limbs so we could roll this off the trail. 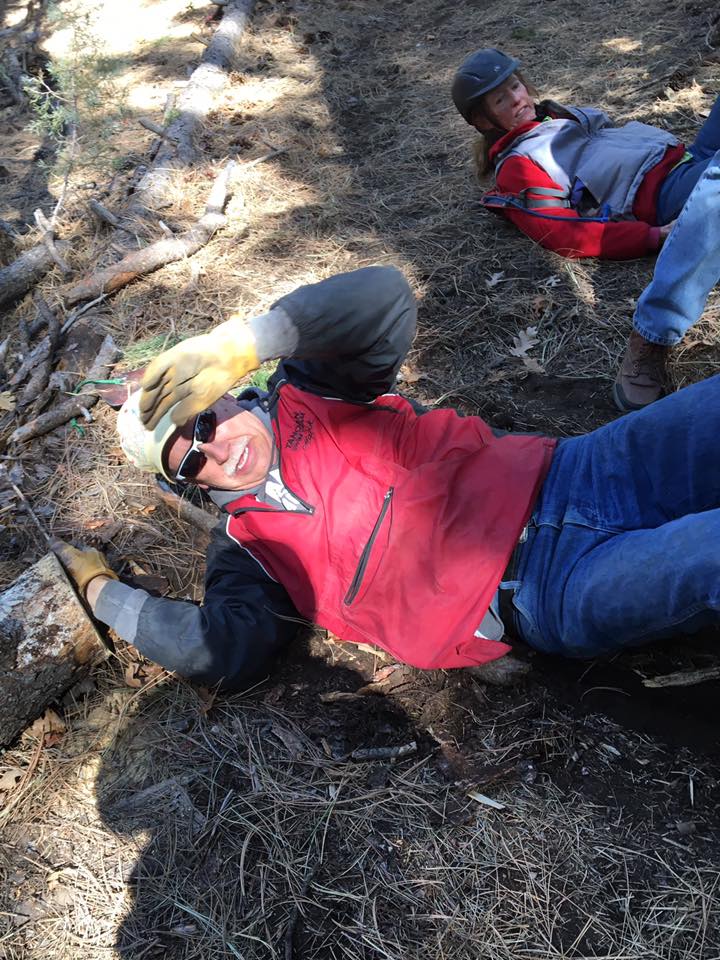 The leg rolling technique or else we are just having a spazz-attack. Jim and me. Photo by Patty Shuert. 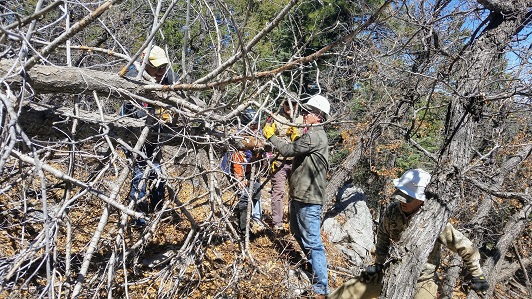 This tree had all but obliterated the path. I was in the lead and went past the tree, down around a rock, thinking that the trail was trickier than anything I remembered  (isn’t this an easy trail?) -and then I looked back and realized I had just taken a reroute.  We fixed it. Jim, Bill and Elisa. 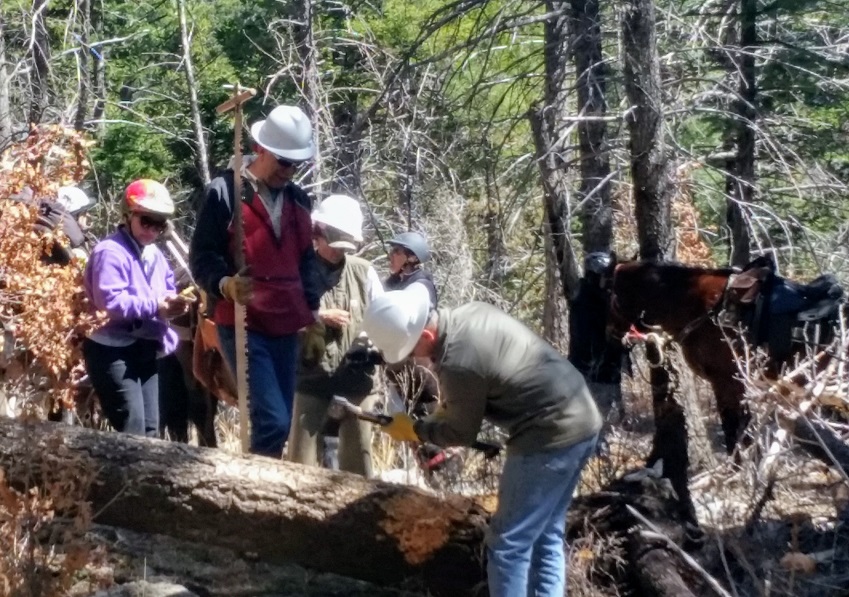 Just another log in the road. Bill debarking to save the saw. Marianne, Jim, and Elisa waiting to go at it with the two-man cross-cut. Buzz in the background.

There were so many trees that five of us had to call it day, but the rest of us cut our way to the burn and found that there were NO trees on the trail there.  All the trees have come down and that part will stay clear for years.  So! We made it to the junction! One whole mile from the the trail head, according to the sign! 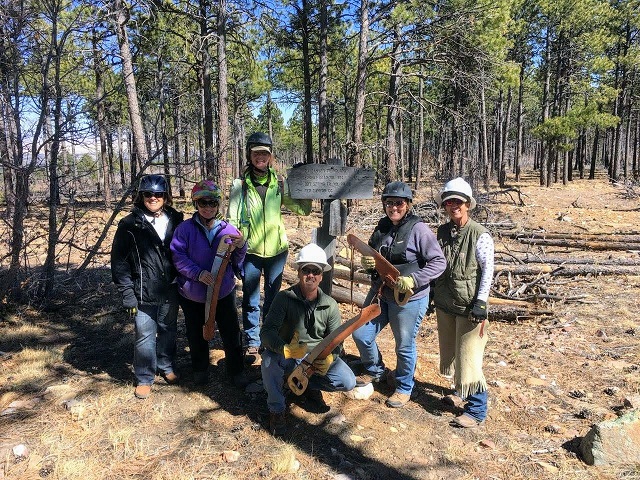 The survivors of the 1 mile and a lot of trees Box Trail clearing job! Karen, Marianne, Me, Bill, Patty S., and Elisa.  Jim took the picture. Melissa and Chris, who were part of the Spruce Crew, donated the hard hats!

It only took us 4.5 hours to get there and 30 minutes to ride back!

It was a fine day, and if the forests don’t close due to fire danger, we hope to have a lot more days like this, this season!

And just asking, why do the forests close during high fire danger? Every time you enter a wild area, there is risk.  How much more risk is there in dry conditions, I wonder. Is the risk to the public?  Or to the forests?  Or maybe to the populated areas surrounding the forests?

Couldn’t they just post some big sign that says ENTER AT YOUR OWN RISK. IF THERE IS A FIRE, WE ARE NOT COMING FOR YOU. HOPE YOU HAVE A FIRE TENT.  GOOD LUCK.

P.S. IF YOU START THE FIRE, AND SURVIVE, WE WILL COME GET YOU, BUT YOU WON’T LIKE IT.