Last Friday, I posted the blog and that was about the last thing I did for the next three days because I was felled by an upper respiratory virus.  I will spare you the details about the bloody phlegm (odd word, phlegm) and the. .oh yes, sparing you!

Horses, as I am sure no one is surprised to read, also can be infected by viruses, and many of the vaccines we routinely give are to protect against viral infection.

West Nile Virus, Eastern and Western Viral Encephalitis, Flu Virus, Equine Herpes Virus (=”Rhinovirus”), Rabies Virus and Tetanus (which is not caused by a virus, but by a toxin produced by a bacterium, Clostridium tetani. That vaccine allows the horse’s immune system to attack the toxin itself).

What are viruses, anyway?

They are little bitty things that get inside cells, take over, and make the cell into a virus factory.  Then, they usually kill the host cell! 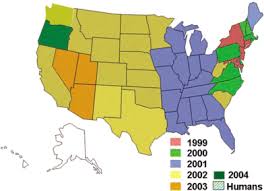 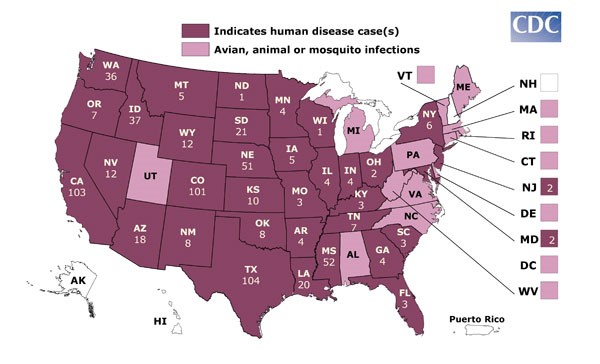 The West Nile Virus, like all  viruses has an outer shell (capsid) made of protein that protects its genetic material.   That shell is 20-sided ball about 50 nanometers in size (a nm is 1 billionth of a meter; our red blood cells are about  7 micrometers or 7000 nm in size and they are small for cells).  The WNV capsid looks like this: 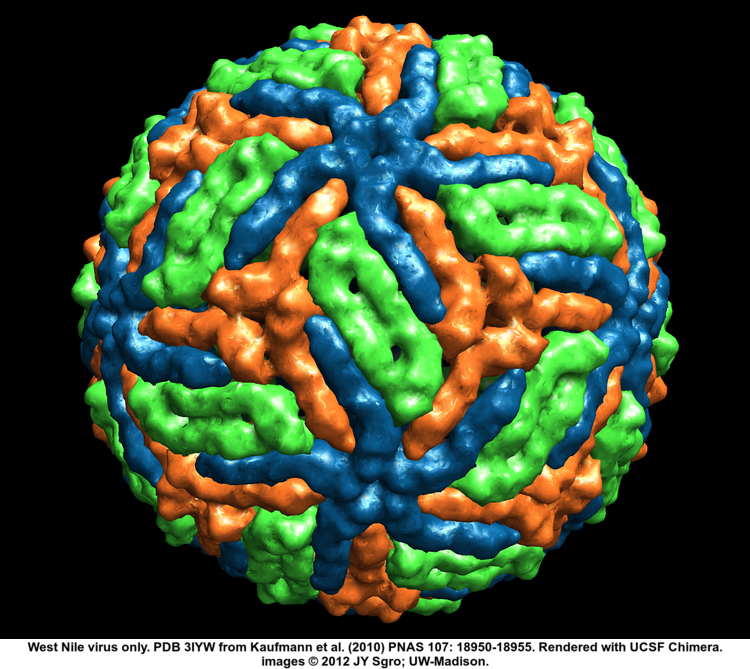 Inside the capsid is the genetic material of the virus. Our cells have DNA as our genetic code.  Our DNA is used to make RNA and that is used to make protein.  The WNV just skips the whole DNA thing and only has RNA.

Viruses are not alive and can not do much of anything unless they get inside a host cell.  The WNV has an envelope around the capsid, and proteins on that envelope stick to receptors on animal cells.  This tricks the cell into sucking the virus inside. Like this:

Once inside the host cell, the WNV RNA is used by the unwitting cell to make viral proteins, thus becoming a virus-making factory!

Some viruses are very host specific because they only bind to molecules found on cells of that species. West Nile Virus binds to cells in the gut of mosquitos, cells in birds, cells in humans, cells in horses, other mammals, too!.

When a mosquito sucks in a blood meal that contains the WNV, the virus invades the cells of the midgut and replicates.  The new viruses get in the hemolymph (essentially the mosquito’s blood) and end up concentrated in the salivary glands of the mosquito-perfect for transmission to the next host!  The preferred hosts are actually birds. Birds get bitten by mosquitos just like we do!

When the bird gets the virus from the mosquito, the internal organs are affected first.  Over 300 species of bird are susceptible and in the U.S., some species, like crows, were likely to die, whereas other species were more resistant.  Over time, the virus got less potent and the birds also got more resistant.

Mosquitos to birds and back again is the normal cycle for the WNV.  Horses and humans are accidental, dead-end hosts.  The virus doesn’t get out to another host from humans or horses! You cannot get WNV from your horse. 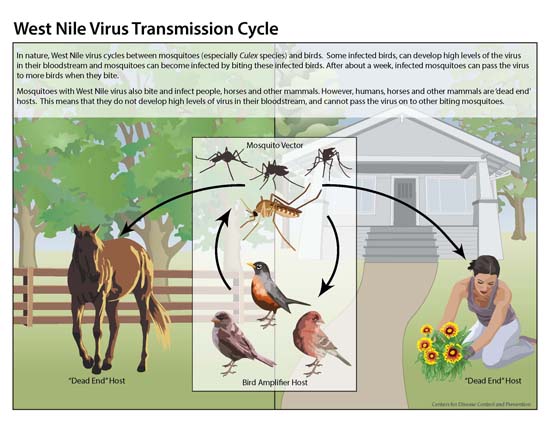 From the Centers for Disease Control and Prevention and is a part of the public domain.

In humans and horses, the virus, when injected by the mosquito, will infect immune systems cells.  These migrate to the lymph nodes and the virus can spread from there to other organs, including the brain and spinal cord, where inflammation can ensue.

Only something like 1% of infected humans develop neurologic symptoms. When unvaccinated horses are exposed to the virus, most develop antibodies to the disease without getting symptoms. Around 6% show neurological symptoms and of that 6%, 1/3 will die.

So, most horses won’t even get sick when infected.  Never-the-less, findings from one study “indicate that currently-available commercial vaccines are effective in preventing WND and their use is financially justified because clinical disease only occurred in unvaccinated horses and the mean cost of each clinical case of WND was approximately 45 times the cost of a 2-dose WNV vaccination program.”

So, a 50nm protein ball with some RNA inside can get sucked into a horse cell, take over the cell and turn the cell into a virus replicating factory, which could lead to the death of the horse!

The world is a scary place, and we cannot even see the half of it!

A word on vaccines: for most healthy horses, like the article pointed out for WNV, the cost of the vaccine beats the heck out of the cost of the disease! Furthermore, if enough of a population is vaccinated, a potential viral outbreak is stopped in its tracks because there are so few susceptible hosts that the virus doesn’t find anyone to infect. Vaccinate for your horses and to protect your neighbors, too!

Herd Immunity: Why your vaccinations help others

3 Responses to “Gobsmacked by a Virus”