The good news was that Penny behaved very well and she and Lori took the Novice High Point award!

Also, all the horses got along just fine at the trailer. 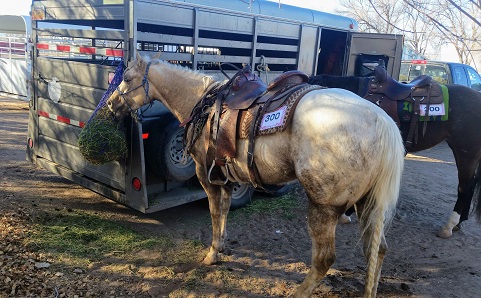 Atti (light) and Indy (dark). Happy at the trailer.

The bad news was neither Atti nor Indy demonstrated their true skills and I was so disappointed I shed a few tears. I got a big ol hug from my friend Janet. (Thanks Janet!)

Indy did not get enough warm up so she just had too much energy to show her stuff.  She went in to do her boxing all bunchy and on her tip toes.  I was hoping for a cow that was falling asleep on the fence  so that we could ease on up there and suggest that it take a step or two this way and that.  What we got was one that shot out of the gate straight at us!  If Indy had been relaxed, we would have trotted up, stopped and it and gone to work, but given what I felt underneath me, I just had her sit there.  Then we meandered over to where the little heifer was hanging out under the announcer’s stand, where upon our time ran out (you get 1.5 minutes to work the cow in the boxing class).  I managed to get two very nice turns while “putting the cow away” and then actually pushed our bovine back to the exit gate.  It wasn’t what I’d hoped for, but it was the right move, I think.

She still felt tense when I tried for Ranch Riding, plus she had decided Penny (who is a mean herd boss and not her buddy, normally),  was suddenly her best friend in the all the world.  We got in the arena, went about 50 feet, Indy hesitated and gathered up under me.  I stopped, waved at the judge, and exited the arena.  There was no point in setting up a conflict when she just simply wasn’t prepared.

Then, I scratched the the rest of her classes.

To get ready for next month’s schooling show, I am riding her more often here at home without lunging her first.  She needs to learn to warm up under saddle, not on the lunge line, and I think she is perfectly capable of that.  I will also allot a lot more time to her warm up at the show.

Atti got her allotment of warm up at the show.  She started off on the lunge line with a huge floating trot with her head high and her tail sticking straight up in the air!  She was beautiful, but really excited and unfocused!  After a good long while, she seemed ready, 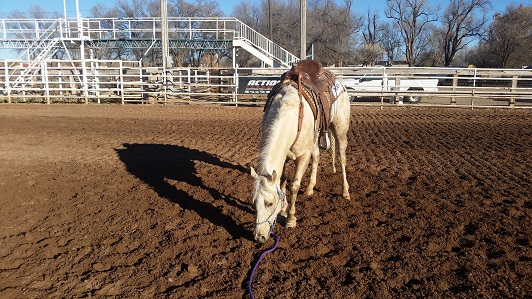 i may be ready now…

and I got on to ride her around the arena.  That went well.  She handled the commotion, and did all the good things she is capable of!

In we went for boxing.  She was not super dynamic, but she had nice turns both ways and I was really happy!

Then we tried Ranch Riding and she informed me that riding in the arena alone, at this time, was a non-starter.  I did, in fact, convince her to get started, but after a short bit, she declined to steer and we did a lovely sideways maneuver that was really the result of a fighting compromise between her plans and mine.  She did not get any happier or more cooperative in the arena.  What a bummer.  A really big, tear inducing, bummer.

Well, how about a trail class outside of the arena?  I did a couple iterations of walk-trot trail and that was ok.  We actually placed in one.  There is hope!

Back in the main arena?  Tried it again and ugh.  No. No steering at all.

Scratched the rest of the day and concentrated on helping Lori with Penny.

New training plan for Atti:  I decided to take off some pressure (not like I run a very pressurized program, but…) and see if we could get some easy walking around the place.

What I got was the finger.  At least I would have, if horses had fingers! So, racking my brains (which I just now typed as grains, twice, and almost left that for humor’s sake, but it really didn’t make enough sense), I decided to dismount when she got really uncooperative (which means threatening to rear, no forward movement, ugly expression, general fit throwing and unhappiness) and lunge her.  That did not change anything.  Then I tried backing from the saddle.  That did not work either.  Then I tried backing her, and not in a friendly way, from the ground.  That made an impression.  Her eye softened up and so did her demeanor. We rode a few feet, nicely.

Tried a third ride, and got “No”, but not “NO!!”.  Got off.  Backed her up and then she rode around for five minutes just fine.

Went in and looked up some articles on “backing for respect” and found some, so while I didn’t reinvent the wheel here, I did get some confirmation that this is a technique that can have an impact.

The next day was similar, but everything improved MUCH faster.

Then I hauled her and worked her in a brand new area.  No lunging.  She was quite worried so we walked around a bit and then we practiced our fast backing on the ground.  I got on and rode.  She was afraid and was jumpy, but she only argued once (and I got off and backed her up) then I got on and we played with a barrel pattern and pole bending  It went really, really well!

So, the continued plan for Atti is NO slack for her refusal to participate attitude (we have ruled out pain, by the way), more trail riding, more ponying, less lunging to get the energy out, and more ground-work for her brain.

And one other change in her life.  I put her out to pasture (= 1/3 of an acre dirt lot) with Indy and LT.  They boss her around (but not too aggressively) and this is also creating a big change in Atti’s Princess of the Universe mindset!

She is challenging me to find the best way to develop her awesomeness, so while exceedingly frustrating and disappointing at times, there is something about her that is special, and we are going to come out with a super horse in the end!

4 Responses to “About that show two weeks ago…”