We called a range tech in the Magdalena Ranger District for info, scouted all over on roads off of Hwy 60 between Magdalena and Datil based on her input, and decided to camp in Sargent Canyon on FR 476, off of State Road 52 (goes right by the Very Large Array).  But then the weather looked questionable, so we revised to Monica Cabin (168 off 60 which becomes FR 549, go left on FR (not state road) 52) because those roads were not likely to turn into tire sucking mud pits in a big rain event.

Turns out, we had cool and dry weather, but it apparently rained and snowed and hailed practically every where else in the state (0.66 inches of rain at my house)!

There were five of us and we used three different methods of overnight equine restraint. 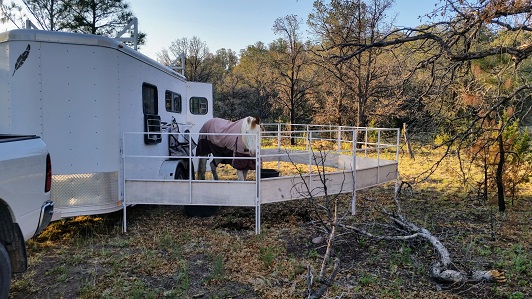 Siri and Linda: High ties. A high tie is a flexible pole that swings out from the side of the trailer.   An equine can move around a little, and hay bags and water buckets can be secured to the trailer. 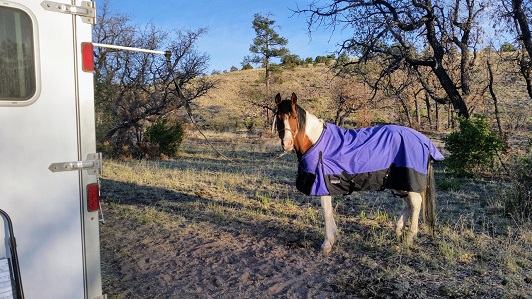 Zodi: i got this! 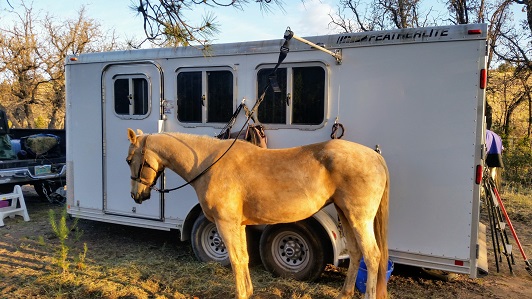 Lily: i have no idea how this is supposed to work….

Patty and Mary Ann: High line.  A line was strung between trees and our horses were tied to the line.   Mary Ann had a handy set of trees that she used to hang a water bucket and a hay bag. I made LT eat off the ground. (And I had to borrow a blanket later when the temperature dropped and LT began to shiver.  That is the second time I needed to borrow a blanket…) 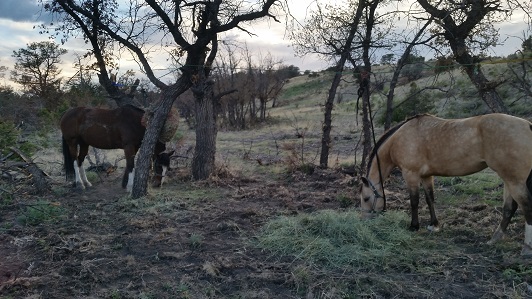 Mary Ann and I also hobbled a little, but Tulip seemed intent on going somewhere, hobbles and all. Since they had trailered together, making them their own little herd, LT was obligated to follow! 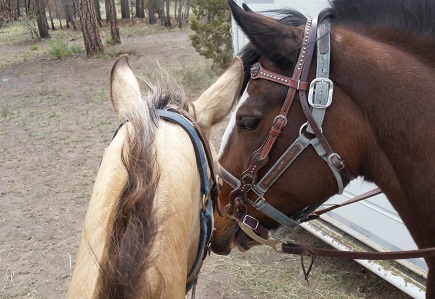 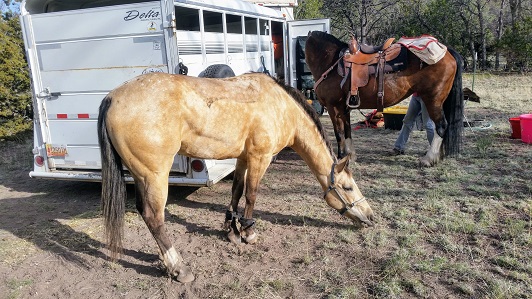 LT: i will act like i can’t move in these until u get ur hobbles on, tulip.

Monica Cabin is in a swale near an ephemeral stream.  It was running past the cabin on our scouting trip, but was dry this time. We were prepared for that and brought our own people and equine water. But we had a nice surprise when we found the stream was live just a little ways up Monica Canyon!

We camped in a just-beginning-to-leaf-out stand of oaks west of Monica Cabin in an area where the North Fire (2016) has stayed on the ground. The North Fire burned over 42,000 acres in the Withington Wilderness Area.  Check out this map if you want to see about where we camped and the fire perimeter. 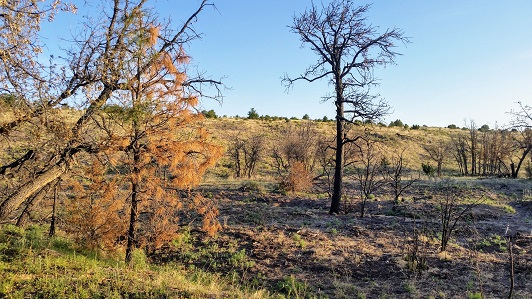 Evidence of the fire near our camp site.

On Monday afternoon, we rode up Monica Canyon along a primitive road for about 4 miles, criss-crossing the creek. No one from wet areas of the country gets this, but we, being used to dry creek beds in our enchanting, but arid environs, were pretty excited about the water.  Our horses didn’t really care, except they did get to drink! As the canyon narrowed, approaching the Monica Canyon Trail Head, the track  was all but obliterated by post-fire flooding.  We turned back there, and we did see one truck on the road in the canyon (the only other person we saw the whole trip). 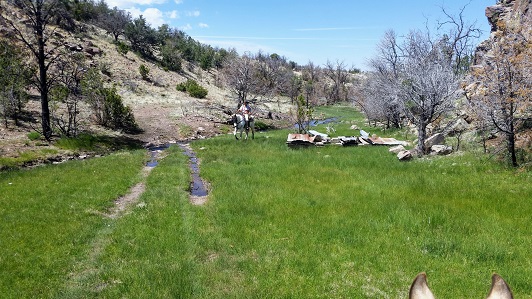 Marcia and Junior and water in Monica Canyon.. 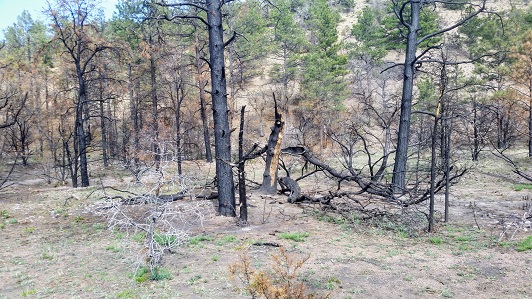 Speaking of our equines.  We have some fine steeds.

Junior: 23.  Medicine hat paint that is deaf.  Been there done that guy that is ready to do it again!

Tulip:  Shire cross that did dressage in her younger years and will go anywhere Mary Ann directs.  And forget that adage that draft horses are quiet.  Tulip is very forward, and sometimes if forward is forbidden, she goes up and down instead.

Lily: Accidental progeny of a QH mare and cryptorchid mustang stallion that the sellers swore was sterile. Not.  She is as brave as they come and has a ground covering walk.

Zodi: $500 rescue (because his owner passed away) that was an 100 mile endurance horse.  Holy moly that horse can out walk all of us and when Siri let him stretch at the trot, my jaw hit LT’s withers! He has a LONG, stunning trot. 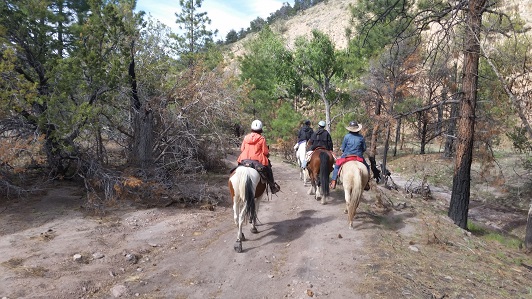 L to R Siri and Zodi, Marcia and Junior (front of line), Mary Ann and Tulip, Lily and Linda.

LT: Fabulous cow horse that can hit the back country with the best of them. 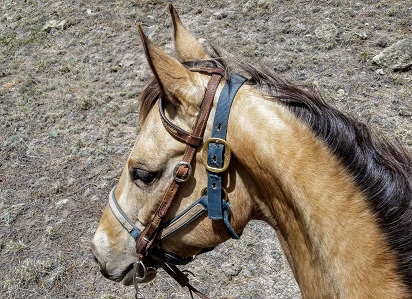 Back at camp, we indulged in some adult beverages and a lovely group dinner.

There are not many trails in this part of the San Mateo mountains, and while there are a fair number of small roads, few of them were on my map or Siri’s GPS…They do show on Google Earth however, and if I had thought about that, I might have used those images, along with my map to plan a loop ride.  No matter. Since apparently we had the entire San Mateo’s to ourselves, on Tuesday, we stuffed ourselves with pancakes and sausage and then Marcia headed home and rest of us saddled up and went west on FR220, away from the burn.  The road was signed as being unsuitable for passenger vehicles, but was in fact newly graded and in great shape.  We rode through Bolander Canyon over to Durfee Canyon. Durfee was grassy with  lovely ponderosas.  We rode on the elk trails that paralleled the road.  Round trip: about 15.5 miles. 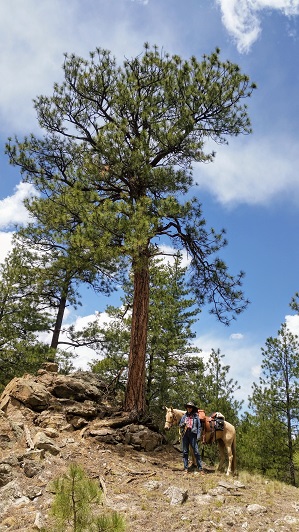 Linda and Lily on a rock formation in Durfee Canyon.

We had ribs for dinner!

Map aside:  I went to Charlie’s Sporting Goods in Albuquerque with my forest service map, showed them the area I wanted to focus on, and using their mapping system (that they bought from Holman’s who used to do these things) got a ginormous waterproof custom-made topographic map!

On Wednesday, we woke to intermittently spitting snow and shivering horses (this is when I needed the blanket), so we ate our burrito breakfast in Mary Ann’s camper, and then we  packed up. 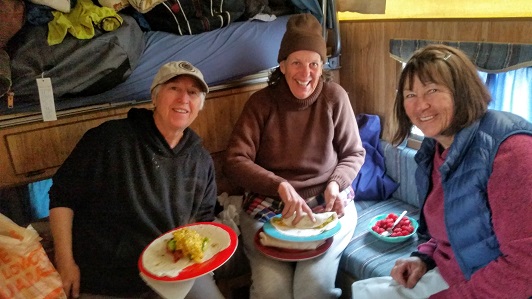 It seemed ridable to me and Mary Ann, so we did a little three mile loop to the north of Monica Cabin on a two track we sussed out on Google Earth on Siri’s phone. 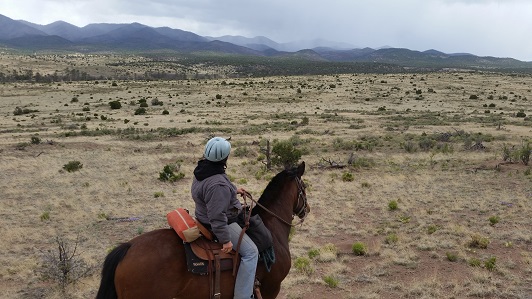 “Hope that snow misses us!” we were saying at this point. (It did.) I think Monica Cabin is over Mary Ann’s head as the ground dips down. The mountains to the left are in the Withington Wilderness Area and are over 10,000 feet.

Siri and Linda drove off toward home, directly into the maw of the storm.  They ended up in hard rain, hail and lightning.  By the time Mary Ann and I pulled out (around 1pm), we trailed the weather and all we had to contend with were some damp spots on the road. 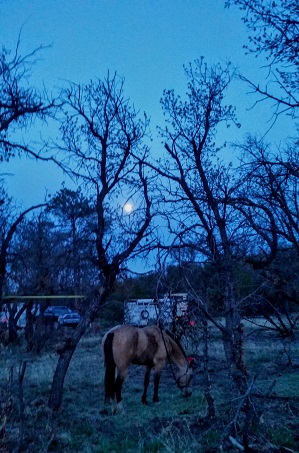 And there was a full moon!