My friends Justin and Miriam have a flock of Navajo Churro sheep, and a couple times of a year they have “Sheep Days” where people come and help with shearing, vaccinating, foot trimming, castrating, etc.  I have never been able to go, so in January, they picked this date, and I put it, in capital letters, on the calendar in my phone. (Of course, there ended up being a horse show that conflicted, but so sorry, I was flocked in for the whole day!)

All sorts of friends and relatives and lots of kids were there.  Breakfast, lunch and dinner were provided. As one participant said, it felt like a barn-raising (not that any of us had ever been to a barn-raising), where people came together as a like-minded group to help out.  In today’s world of electronic self-sufficiency, he pointed out, sometimes this sense of community purpose and  group connection to the rhythm of the Earth gets lost. It was nice to think of the day in this way, and of course it was a lot of fun!

Seventeen or 18 sheep needed shearing.  Justin did all the shearing.  He got better and faster (and more tired!) as the day went on.  Churros have a coarse, carpet grade, wool (great for Navajo rugs) that has a lot of lanolin.  This gums up and dulls the blades of the shears, so they have to be cleaned and changed frequently. 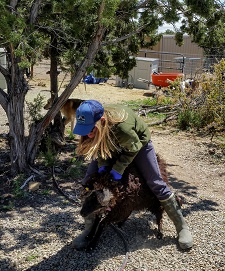 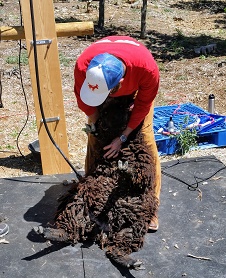 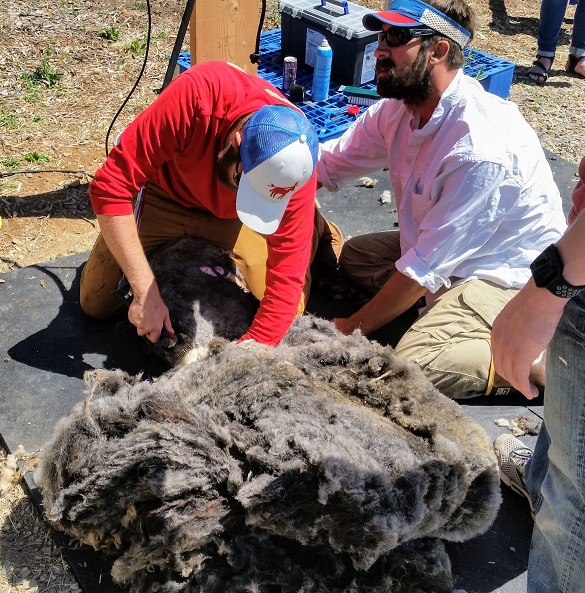 That seems like a lot of wool! Where are ewe?

The blades are very sharp, which makes the wool come off well, but also means the sheep can easily be sliced.

It turns out these superficial wounds can be repaired with Super Glue. Which we did.  Super Glue is not approved for use in humans for several reasons, but here is nice short article about Super Glue and emergency medicine. 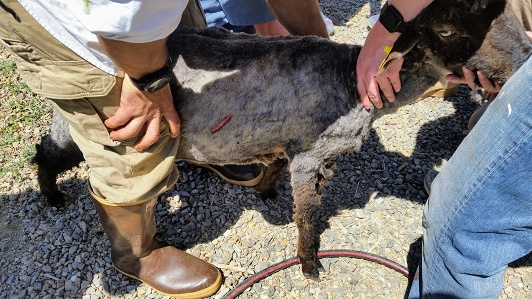 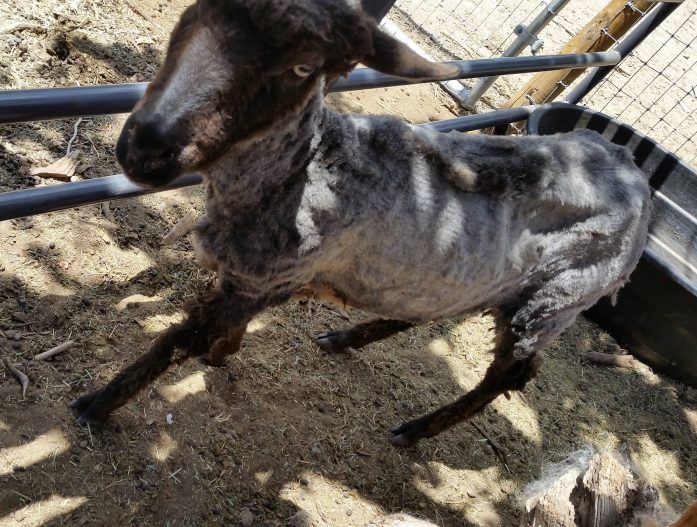 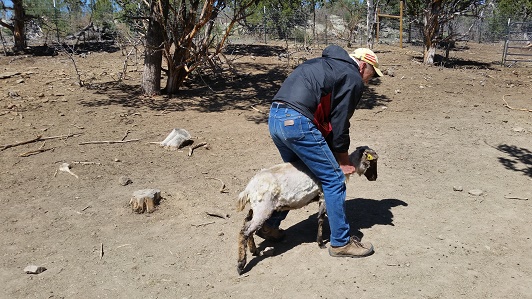 Jim escorting another ewe back to the pen! Not as much to hold on to with the wool gone!

!The sheep also needed to be dewormed, vaccinated, and have their feet trimmed. As a linguistic aside, I usually say, “wormed”, which is the exact opposite of “dewormed”. I might have to continue that practice, if only to drive my veterinary friends nuts.

The sheep were in smallish pens, and to catch them, five or so people would herd them into a corner, block their egress, and nab them when they made a break for freedom.  With all their unsheared wool, they were relatively easy to grab ahold of.  One friend made a neat snag in mid air as a ewe tried to jump past her. 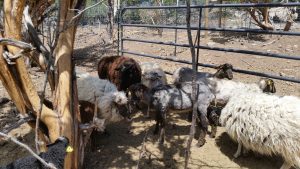 One captured, the sheep were vaccinated and dewormed.  The dewormer is oral and the shots were all subcutaneous.  (In horses, the vaccines are intramuscular.) 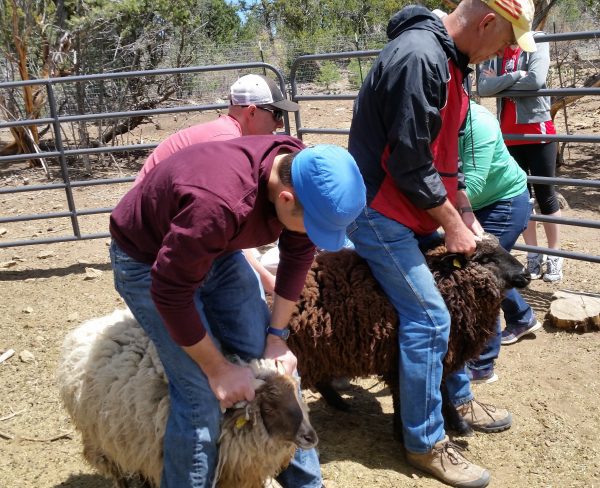 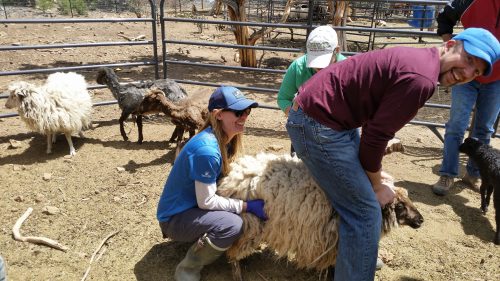 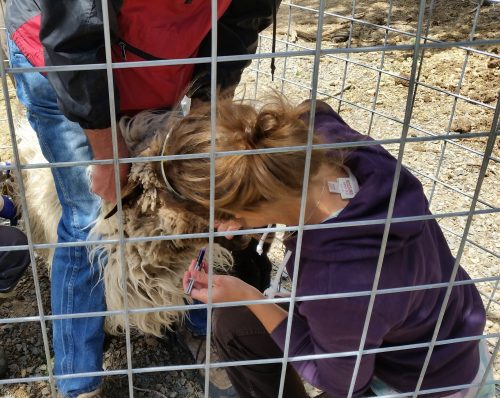 A sheep chair was used for the foot trimming.  Sheep are remarkably docile in the chair. Their feet can be trimmed with clippers.  Just don’t trim them too short!  This is literally called “cutting to the quick”, which explains that expression. They bleed if “quicked”. 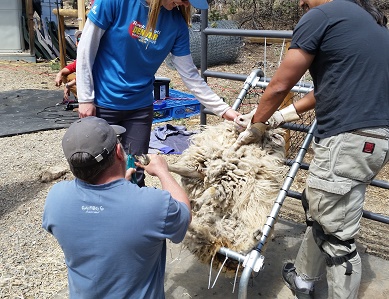 Sheep in a chair! Sid was the expert hoof trimmer in residence. 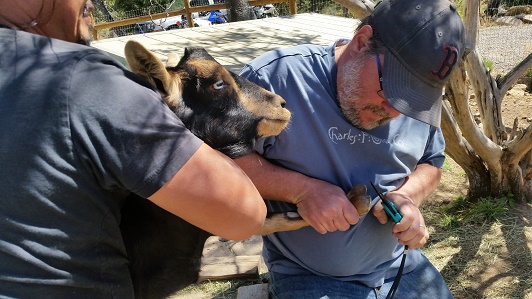 Goats need love too, and we vaccinated, dewormed and hoof trimmed them. No shearing!

At the end of the day, the people were tired and the sheep were bald! It was a good day all around! 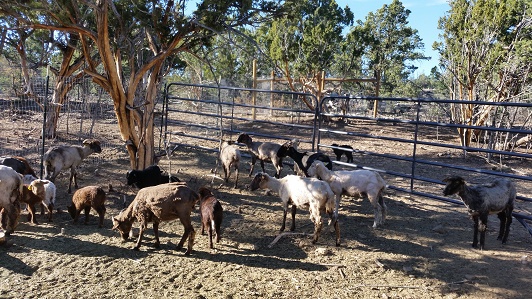