I’ve been running ConneryBeagle in agility for…well, nearly that decade (although he obviously wasn’t competing in those first training months).  He’s almost eleven, winding down his career, and basically has the skills he’s going to have.  I keep him tuned up, but am not introducing new agility things.

That doesn’t mean that Connery doesn’t introduce new challenges to me.

On occasion over the years, he’s startled me with a totally unexpected turn away from the jumping line. After the run I go dashing around to my friends and ask, “What did I do?  Was it my feet, my shoulders…?!”  And more recently I have video to check out.

But no one ever sees what I did, except to agree that Connery quite honestly read the moment as a rear cross (in other words, to turn away from the current jumping line).

Well, it was always “on occasion” and I never did figure it out, so I filed such moments away and went on.  But as he’s gotten older–and his power steering becomes more and more refined–this particular glitch has cropped up more often.  Including at the last trial.

As ever, Connery made this mistake with confident pride.  “I’m a good boy!”  As ever, I couldn’t begin to figure it out.  I scowled a lot at the video, though.

(The oopsie bit is at 24 seconds.  This is a slow start for him, btw–he’s thinking too hard about being a good boy.)

Then I went home and fretted.  I had tried to be so very clear at that spot!  What if I couldn’t figure it out?  What if I spent the rest of his limited remaining agility time sending him off in the wrong direction?  Oh fret!  Oh bother!  Oh sleeplessness!

During the night I replayed the moment in my mind, thought about the December trial and the examples during training…and somewhere near morning…

All those years after the glitches started…

He reads a rear cross when I approach an angled jump on even the most subtle converging line.

I know…that was gobbledygook.  Here, I’ll show you.

Judges increase course difficulty by placing jumps at odd angles, or staggering them slightly (or both).  In the big picture, maybe a course section looks like a simple arc, but the fine points mean it’s anything but.  Some or all of the jumps have wings, and that changes the picture even more by forcing handler path.

Here’s the course where we went wrong at this trial: 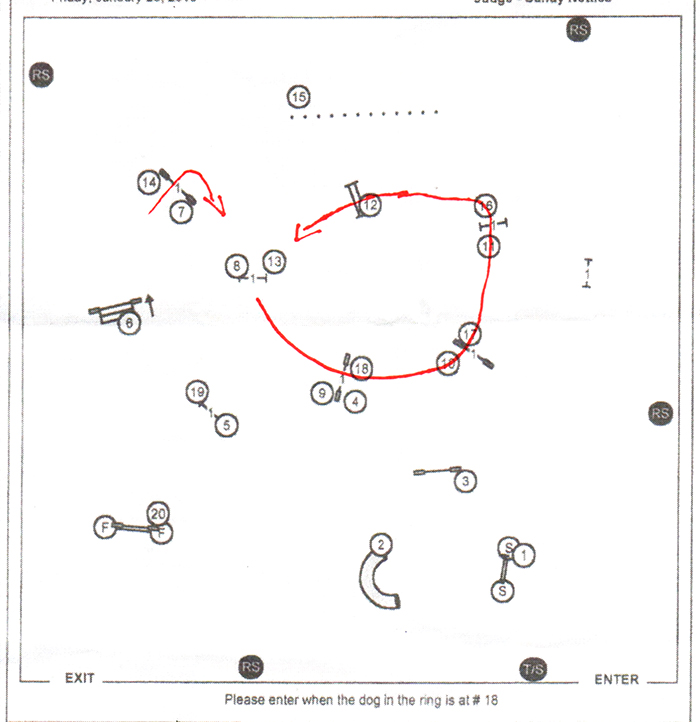 Dogs mostly failed to qualify on this course by hitting the wrong tunnel entrance or failing to take jumps #5 or 13, along with the usual challenge of bars down and navigating the weave poles, plus some off-course to weaves after 11 (and the ever challenging “wait, there’s a smell here”).

The problem sequence for us was 9-10-11-oops.  Which looks pretty simple on the front of it–until you consider that one must manage the potential off-course to the weaves*, or how the setup from the 6-7-8 jump affects the handler path leading into 9-10-11, or the beguiling nature of the off-course jumps along the way (the backside of three, the lone little jump off to the right between 10-11…).

*Just to complicate things, course maps don’t always reflect the exact nature of the course as set.  In this case, the off-course to the weaves was a bigger threat than it would seem from the map.  PS don’t watch me run.  Or if you do, just remember how badly my feet always hurt!

The point being, the 11-12 jump needed some handling.  One option was to push the line between 10-11–that is, to push into the dog’s space and then pull out again, thus flattening the following line from 11 -12 (but potentially pushing the dog into that off-course jump). 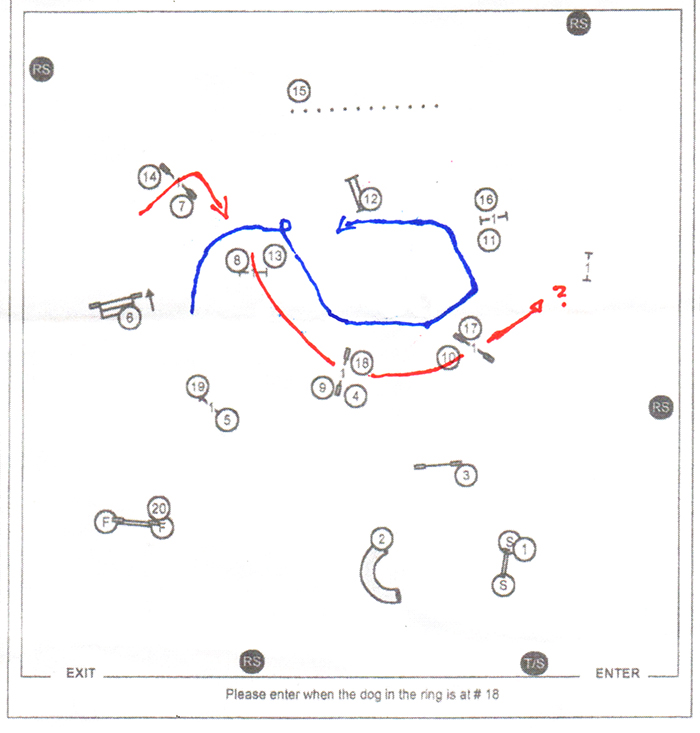 Pushing the line to create a better path from 11-12-13, but risking that off-course jump…

Another was to increase handler focus at the 11 jump by moving in closer on a converging line and pulling a sharp turn.

That’s the one I did.  And Connery flipped away over to the right, reading it as if I was going for the rear cross: 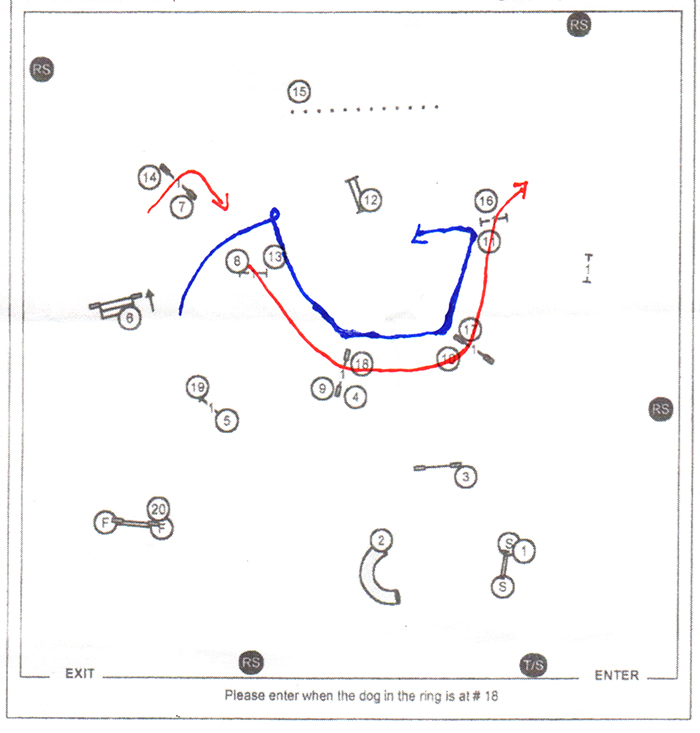 Grabbing handler focus but…oops…  In a rear cross, I would have continued in a sharp right to cross behind the jump, cueing Connery to change direction.

You can see that it’s a subtle sort of distinction…

It’s not one with an immediate solution, either.  This is an understanding that Connery has built over years, and fixing it wouldn’t be an easy thing, nor probably worth it.

Because I can (in most instances) be in a place where I can support Connery with motion-based handling, I’ll address the situation by using pushes to round out and reset the path in such jump lines, just as illustrated in the second picture.  The off-course opportunity usually remains, but it’s now less of a threat than the errant rear cross.

And that’s a whole lot more solution than I’ve had to hand all this time!  Plus it’s an example of so many things: how we trust our dogs, the subtle nature of agility handling even when it does look like we’re just loping along, and the responsive nature of our dogs in the first place.  Not to mention it’s the perfect example of what every Galaxy Quest fan already knows:

Never Give Up!  Never Surrender!

Okay, it took a while.  But I got there eventually, right?

3 Responses to “Taking the Long Road”